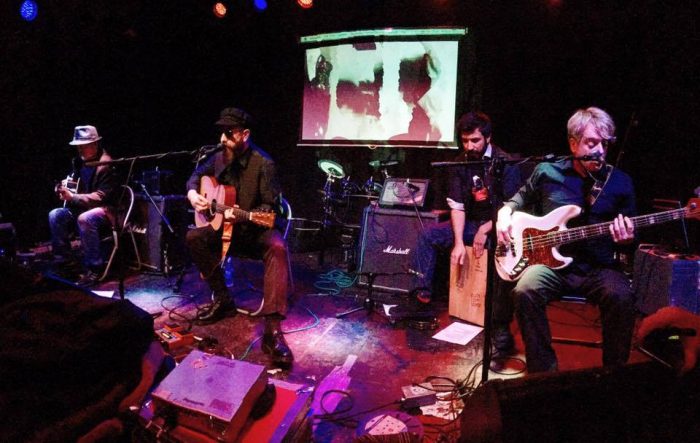 Martin Metcalfe and The Fornicators recently recorded a double live album for their fans in Glasgow and Louder Than War’s Harry Mulligan was there to take notes:

Martin Metcalfe and The Fornicators command respect if not reverence in Scotland.  Martin is the guy who was and is the creative force behind Goodbye Mr McKenzie and Angelfish. For clarity’s sake, Angelfish were the band that projected Shirley Manson into post Nirvana super group, GARBAGE.  The Filthy Tongues came after Shirley Manson left for America and Super Stardom.  Martin Metcalfe and The Fornicators are Martin’s acoustic, solo project. Everyone still with me?

As the man himself says:

‘Martin Metcalfe and The Fornicators is Space Oddity if The Filthy Tongues are Ziggy Stardust –  its just more relaxed!’

As suggested, Martin is something of an institution here on the Scene in Scotland.  He is also something of a National Treasure. Furthermore, Martin  and The Fornicators possess the unusual bragging rights of being equally loved in Glasgow AND Edinburgh. This is something of an accomplishment not always achieved by Scottish bands.  It is also one which Martin humbly doesn’t mention himself.  Its also a bloody-well coveted attribute by other Scottish artists as well.

Fans are undoubtedly important and so is catering to their appetite for recorded material.  Martin Metcalfe and the Fornicators think so anyway.  This night was organized to record Martin’s solo stuff for posterity, but mostly for their loyal and amazing fans.   Included in this proposed production are very carefully selected covers, and lets not forget those.  They are pointers and salutes to core  influences.

The lineup on the night included Terry Adams on guitar.  Terry in addition to playing guitar on the night, also produced Goodbye Mr McKenzie back in the day.  He is an old and dear friend.   From the evidence of the crowd  in Audio in Glasgow, he is a much loved one at that.  Chris Tracey played bass, and Asim Rasool was on cajon and drums.

This was a special show.

The night was split into two sets intended to be  packaged for vinyl.    Crowd favorite Amsterdam kicked off the night, and was reversed from its usual position of closing the night.  Its one of those old faithfuls that warms the heart.  Following that was Crew Cut, and then a carefully selected cover, I Need Somebody by Iggy and The Stooges.  Metcalfe’s vocal is very well suited and he made owned it.

Somewhere in China, originally performed by the lauded Edinburgh four piece band, the Shop Assistants, was originally covered back in the day by Goodbye Mr McKenzie. Its to their credit that its covered for the record by Martin Metcalfe and The Fornicators.  Titanic is a Nick Cave-esque, tragic ballad featuring people in the grip of raging emotional immaturity and addiction.

Lou Reed’s ‘Candy Says’ is a great addition.   It came with some commentary from Metcalfe about Reed’s autobiography and how it revealed him to be something of prick.  The Sun Wont Shine was one written and performed by Metcalfe and Manson in Angelfish.

Long Time Dead, from the Filthy Tongues most recent album, Jacob’s Ladder, is clearly, for the author at least, the highlight of the night.  It is a composition that stood a head and shoulders above other songs on the album.   This was followed by Ugly Child from the unique project/experimental ‘Scenes”.   Scenes was the combination book of paintings by  Martin,  recitation of poems by Paul Hullah, and music by The filthy Tongues.   Martin is also a seriously considered, exhibiting visual artist, in galleries in Edinburgh, which he calls home.

Hard, Knocking On Joe,  Sorrow, King of the World, and  Walk on the Wild Side got the whole crowd singing along and finished the set.

The second set/side opened with Goodbye Mr McKenzie, evoking a giant cheer from the geographically mixed Edinburgh and Glasgow crowd.   Martin asks if there are any other visitors, and we see that the crowd is peppered with Germans, Hungarians and the odd bod from Kirkintilloch, me!   Everyone has made the pilgrimage for the recording of this double live album.

Don’t Switch Me Off, Candlestick Park, and neo-classic,  Holy Brothers, also from The Filthy’s and recent album Jacob’s Ladder came in quick succession.

Calton Hill and Sick Baby precede the much loved Heroes from David Bowie’s album of the same name.  This was originally covered by Goodbye Mr McKenzie in honor of the fall of the Berlin Wall. Adams and Metcalfe while recording a Goodbye Mr McKenzie record, both witnessed the first people come through Checkpoint Charlie on the 11th of November, 1989.  This raised some anecdotal chat from Mr Metcalfe about recording at Hansa Ton Studios at the time.  Known as ‘Hansa by the Wall’, it was the selfsame studio that hosted Bowie and Iggy, Talking Heads and many more.  Martin told the audience how they had been in the habit of drinking every night until six am, sleeping all day, and going to work at night on the McKenzies record.

Now We Are Married, Open Your Arms, and The Rattler are all live favorites.  On this night they had everyone providing a choir.  However,  New Town Killers seen and heard everyone go up a gear from choir to football stadium roaring Choir.  This  finished off the main body of the second set, and the band left the stage.

For an encore, an unrehearsed and ramshackle version of Mad Cow Disease was performed due to surprising audience demand. Goodwill City brought the night to a close, and everyone went home sated, and in anticipation of this Live record soon to come.