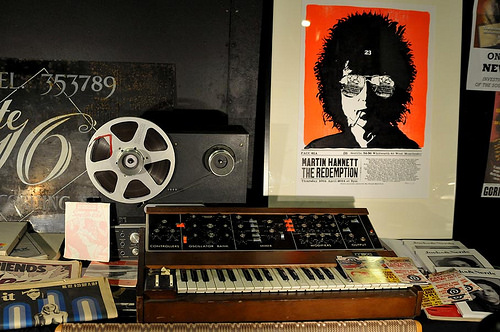 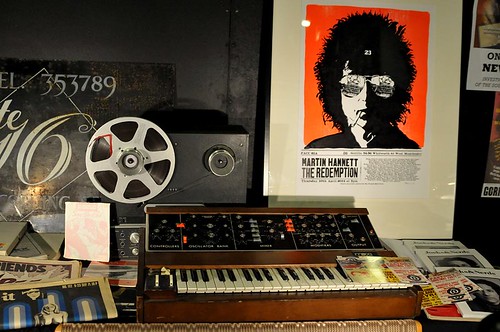 Chris Hewitt, a legend in his own right, with his son Tom, planned this celebration of Martin’s life. The date was significant, the twenty third anniversary of Martin’s passing. The number twenty three also had significance for Martin. You can find out more if you take a look at Chris Hewitt’s documentary film, available on DVD, or read his new book, Martin Hannett, Pleasures of the Unknown. Martin was a mystery, a genius, an outsider, creator of ‘the Manchester Sound’.

Revered by many who never knew him, he was also loved and admired by those of us who did. Friends, fans and family were in attendance, as Chris Hewitt had hoped. There was also serious media attention ahead of the event. There was presence of absence too.

Messages from Martin’s siblings and from John Cooper Clarke. Tony Wilson appeared on film, interviewing Martin in the studio for Granada , back in the day. Martin’s collection of audio equipment, records and ephemera were on display, more shrine than exhibition.Chris Hewitt has collected and safeguarded that part of his legacy. For all the reminiscing, this was a celebration, not a wake. It could have been the Arts Lab or the Magic Village. I even saw Mike Don in the crowd. Many of those there have their personal stories of their own achievements and ambitions, as well as of their connections with Martin. 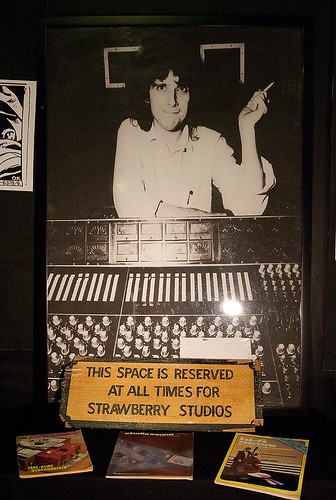 On stage were musicians who had been part of Martin’s life, his career and development as a renowned producer, from the earliest days. Invisible Girls, Steve Hopkins, Victor Brox, Paul Burgess, Spider Mike King, John Scott, Dave Lunt, George Borowski. Bruce Mitchell was there. Tosh Ryan, who had begun the film project Chris has continued, was there. Alan Wise shared the MC duties with Chris Hewitt, reminding us of the days before success and disagreements, when we were all sharing a scene together. This was deep history. Many of us had known Martin as flat mate and bass player, from Music Force and Rabid Records days. He was intelligent, erudite, obsessive, but not self destructive in those days. His talent to work with electronics and manipulate sound was developing. He had the social awkwardness that many of us who went to Catholic single sex schools recognised and shared, Tony Wilson being the exception that proved the rule.

Personal highlights were CP Lee singing him a Love song, ‘Alone Again Or’ and Dave Formula playing both alone and along with Martin as the ghost in the synthesiser.  This was about death and love. There were many ghosts in the room and many memories. What might Martin have become if he had lived to be our age? Perhaps he could have combined the academic with the music business, recognised as a pioneer, inventor, maverick and legend.
He continues to bring pleasure and inspire, whether you knew him as a friend or as an influential producer.

All those threads, memories, connections, links and lives. I’d love to hear how Martin might have transformed them into a soundscape. It was a rare gathering, for one night only. Thank you to Chris Hewitt and all who made it the redemptive experience it truly was.

All words by Nicky Crewe and all photos © Melanie Smith. More writing by Nicky on Louder Than War can be found at her author’s archive.