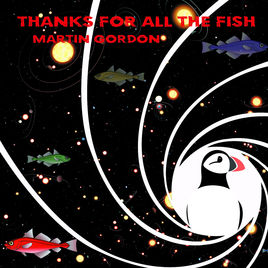 Thanks For All The Fish

New album from Martin Gordon whose illustrious past includes stints playing bass in Sparks (circa Kimono My House), Jet and the Radio Stars…..Ian Canty ponders an album that takes the present turbulent times as its concept…………..

Though coming to prominence around the time of Glam as a member of the brilliant Sparks and later on New Wave humourists the Radio Stars (who evolved out of Glam Rock band Jet), Martin Gordon has for some time forged his own peculiar (sometimes very peculiar!) solo path. If I was asked to come up with a glib statement to try and sum up where his work in his own right is coming from, I would chance my arm at saying that he’s a little like a mixture of Robyn Hitchcock, Wreckless Eric and Neil Innes. Which might not be the most fashionable of sounds, but certainly a pretty interesting place to occupy, because those three mix humour, esoteric ideas and cutting observations in a way few can match. Martin Gordon doesn’t really sound like any of that trio in particularly on Thanks For All The Fish and this record is all carried off with an individualistic flair and idiosyncratic humour. But he mines a similar seam of inspiration and deft comic/tragic touches.

On this new recording he is admirably backed by his associates Ralk Leeman on guitar and drummer Romain Vicente, who give a rock-solid basis for Gordon to spin his stories and flights of fancy, with guests Mario Ferraro, Chesta Gordon and Adrian Stout among others chipping in. On Thanks For All The Fish Gordon holds up a mirror to the insanity which seems to greet us at every turn, in a world where such risible concepts as “Post-Truth” and “Alternative Facts” are given credence, instead of dismissed for the blatant poppycock they most certainly are. The yearning for a idealised past that never was is something which haunts the UK even more in the modern day if anything and on Idiots and Political Correctness Gone Mad (Spoiler alert! Irony!), this notion is taken to bits and rebuilt to show the inherent stupidity of donning rose-tinted specs to furnish a plainly untrue view to the past. We never really had it that good.

Moving on, chief bogeyman here is the POTUS, the overly needy baby-man who cannot bear the slightest criticism, whilst occupying a post that requires the utmost scrutiny. The Donald gets a well-deserved trashing on No Thank You, Dump The Trump and Tiny Mind, with Martin laying bare the massive stupidity and arrogance involved. On Unpresidented, with the great line “It’s my old pal Putin for whom I’m rootin'” he takes us directly into the Trump mind-set, confused fits of pique, boasting and making massive blunders. Sadly “got a billionaire team of trigger-happy loonies” has added resonance after the Florida shooting.

There are some references to Gordon’s previous work, the most marked example of which is the Radio Stars 1977 song The Beast Of Barnsley is recast for modern times as The Beast Of Ankara. This new version carries a similar thump to the original and if you still hanker after the Stars’ particular kind of Pseudo-Punk sorcery you have come to the right place. The bouncy New Wave of that band is evoked often, but there are also some quite Psychedelic Pop going on in Political Correctness, which benefits from a touch of the Small Faces style knees-up too.

Half A Chicken’s satire of couch potatoes is unusually set to a Skiffle/Jazz background, with added kazoo providing the lead and God’s Not Great Street Rock & Roll approach frames a song which wrestles with the madness of the terrorism and God. The closing Grim and its Coda, with string arrangement and wobbly saw (also employed on God’s Not Great) brings things to an apocalyptic but oddly comforting end. I also feel that a lot of this record lends itself to theatrical interpretation and it is no surprise that Martin Gordon has recorded a set of Gilbert and Sullivan songs, there is a similar sense of sending up the stuffed shirts and the complacent prigs of the world.

Throughout this new album Martin gives his skewed view of the state of play in the world, a non-stop tour through the madness, poor manners and small-mindedness that we are presented with on an almost daily basis in 2018. The sense of surreal disbelief which I think a lot of us feel on being confronted with the latest decisions/actions of our “leaders” take is clearly expressed here. Gordon gets the balance just right in applying the correct level of comically played horror and sense of the ludicrous to accurately puncture the pomposity of the ruling classes. Long may he do so, because on Thanks For All The Fish he proves he’s among the sharpest musical parodists around and it sounds darn good too.