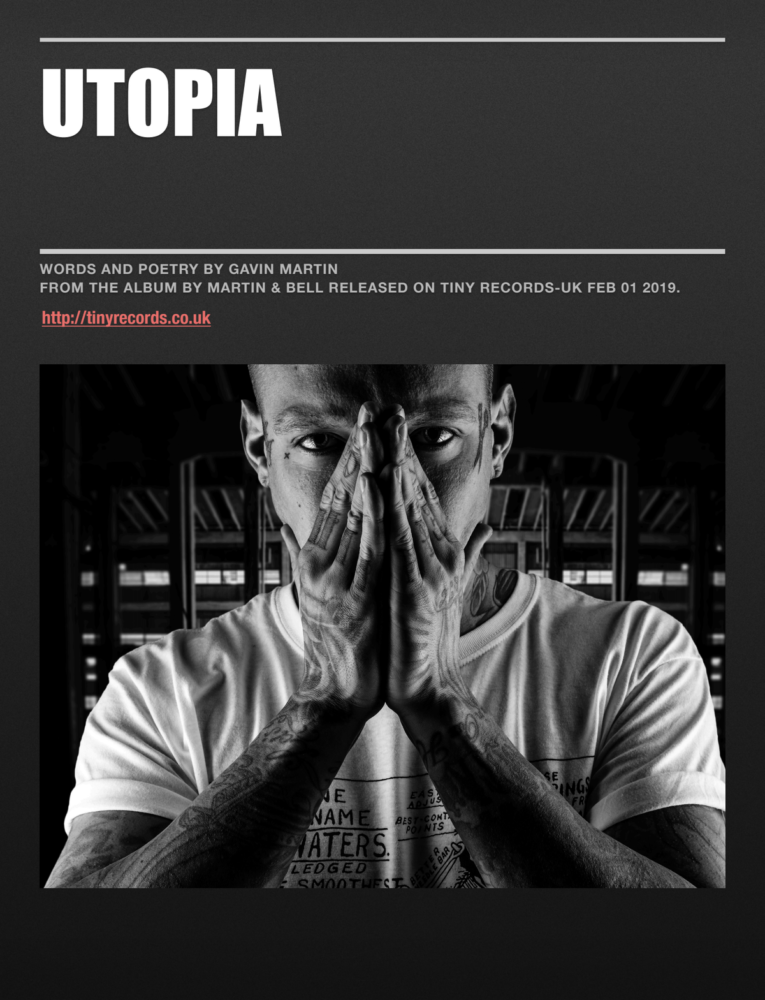 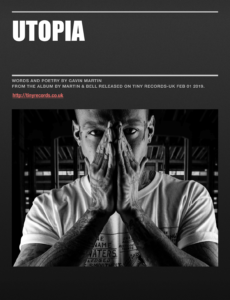 When Gavin Martin made his debut with Talking Musical Revolutions (reviewed here) in 2017, it was one of the more pleasant surprises of the year. The ex-NME writer has had a long career as a journalist from the dawn of Punk onwards, but his move from the reviewer to the reviewed was an unexpected jump. However it was one he negotiated handily and with no little skill. Using cool world play he took the listener on a ride through music history, recounting the stories of fallen heroes like Rory Gallagher and Marvin Gaye and also not shying away from the seamier side with the sinister Thatcher And Savile. Aside from musical travelogue there was also the touchingly autobiographical My Daddy Went To Belsen. It worked so well with Martin’s sharp words dovetailing perfectly with the sympathetic backing music and Talking Musical Revolutions was one of the highlights of the year.

Now he’s back, collaborating with multi-instrumentalist Martin Bell under the extended Martin And Bell moniker. Utopia is the first offering from this duo, so this album acts as a follow-up to Gavin’s last LP and a debut for the duo too (a little confusing but I hope you get the picture). It retains the same basic structure of Talking Musical Revolutions in that it keeps the format of spoken word with sweeping music settings accompanying the verse, but broadens out in terms of subject matter and delivery, keeping the whole thing fresh.

Utopia kicks off with Tiny World, the subject matter of this seems to me to link a little with the later track When They Were Young. Both look back on lost childhood and also the ying and yang of growing up, danger and safety. Some soaring synths and a slow pace on this one complement Gavin’s sensitive and acute wordplay, this is ultimately a sad tale, but also there is a thankfulness for having at least lived through these times. No Arms Factories In Tottenham follows and takes in the Tottenham riots of a few years back and gun crime, a Reggae rhythm buried deep in the background of this sobering story of a vicious circle of violence. Anti-Social Media may be a bit too on the money as a title, but the verse lucidly explains the solitary nature of Twitter, Facebook et al and how this actually cuts down interaction between people rather than improving it.

Part of the previous album’s make up was, of course given Gavin’s long career in music writing, about notable figures in popular music. This LP’s sequels include Roman Totale’s Death, addressing Mark E Smith’s life and work. Set over the kind of static Indie Rockabilly repetition that the many, many members of the Fall often struck up, this track works as a celebration of Mark’s life and a personal view of his foibles, ideas and greatness. Though he would have no doubt baulked at this, Smith lived his life as a proper artist should, never giving up on what he was doing and the way he was doing it even when ill health took its toil and forced him into a wheelchair. Roman Totale’s Death is a highlight of this album and Gavin strikes the right balance of insider knowledge, personal admiration and tribute. It is a great piece.

An Alternative Ulster (which is also has a radio edit of the piece as the final track here) goes back to Gavin’s roots on the NI Punk scene and was the title of the fanzine he and Dave McCullough (later of Sounds magazine) put together in those halcyon days. A solitary piano begins things, but is soon joined by synth and percussion. The words hint at the clear and present dangers that being a Punk in Belfast presented (the Catholic and Protestant terrorist gangs and if you survived them, watch out for the Outcasts!). Heroes of the scene are saluted and you get a real feel of those turbulent times. Martin’s love of Reggae is highlighted on the Bass, The Drum, The Treble, a cool dreamscape Dub feel and Johnny Clarke, Ernest Ranglin and Don Drummond all feature in the lyric. It’s a beaut.

In trying to portray the both past issues and the current climate it is inevitable that Brexit rears its head and Brexit Blues details the Irish Border problem that is being treated as an after thought. The album as a whole is not all negative though and things more often than not come laced with a spiky humour on Utopia. The most obvious example being There’s No Excuse For Poetry, which manages to name-check ATV and subtly self-parody to a Country and Western-tinged musical backing. Apart from the Alternative Ulster coda this begins proceedings to an end on a knowing and self-aware note.

Overall Utopia builds admirably on the strengths of Talking Musical Revolutions and moves things on a stage. Gavin’s measured and halting delivery picks up intensity when it is required, but is often richly emotional and light of touch. Martin Bell’s musical concoctions never overshadow the verse, but they are inventive and when given the opportunity fly off appealingly or drop in little touches which help keep things interesting. Utopia is an intoxicating brew and something different than the norm – There’s No Excuse For Poetry as the song goes, but there’s no excuse not to give this a chance.