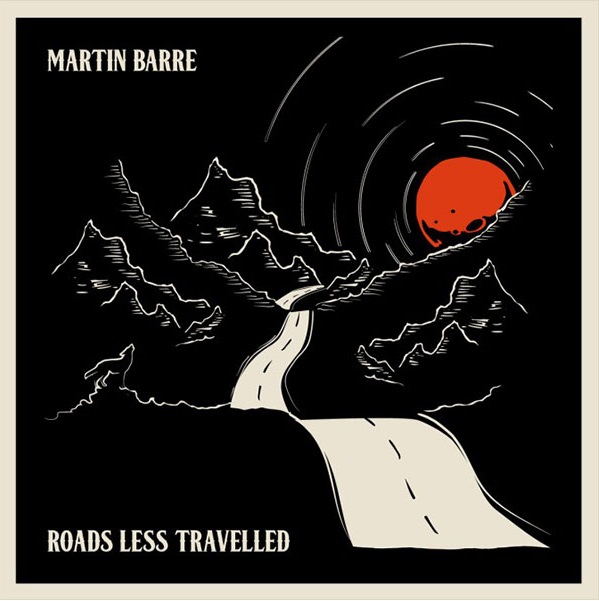 Martin Barre is a fabulous musician and  true gent whose long association with Jethro Tull seems to have sadly faded with Ian Anderson’s on-going use  of the Tull name and legacy. However, things move on and there are many roads to be travelled – something that always brings a sense of optimism.

Many believe he’s had a raw deal from the fallout of the Jethro Tull saga that now sees Ian Anderson continuing to fly the Tull flag solo with assorted musicians (which he always has to be honest) yet, for most, Tull was always Anderson with Barre by his side. So what do you do when the rope has been cut? You carry on playing and touring as any musician would. Barre has long established his own little unit that features vocalist Dan Crisp and bassist Alan Thompson to help him deliver a repertoire that leaves him free to go way beyond whatever Tull used to do.  This has been apparent in the occasional solo releases that form his solo output; one that sees him philosophically viewing his solo career as a chance to “relish the challenge and uncertainty in what lies ahead,”  his gift for channeling rock, blues, jazz and acoustic forms also seenig him determined to forge on with a stronger focus on songwriting.

Hence the album title coming into play with less of an emphasis on fizzing electric solos and a chance to feature plenty of mandolin, mandola and banjo, and also to shift the vocal direction as Dan Crisp steps back to allow Becca Langsford to take lead vocal on the stark yet polished and, erm, bluesey Badcore Blues and And The Band Played Only For Me. The latter’s where one of several dashes of Hammond organ takes us back to the days when Hammond was king, while Alex Hart also steps up for a stripped-back acoustic You Are An Angel.

While there may be a couple of subconscious digs or the chance to misinterpret – the title track referring to choosing paths through life not dictated by others and For No Man, the loss of trust and respect  –  the main theme seems to be about independence, freedom  and happy times.

Inevitably, people will look for the material that might be most Tull-like and there are moments where you can imagine the ghost of Ian Anderson at his prime, rather than the hoarser latter days, making a mark – I’m On My Way being one. But to Barre and Crisp’s credit, they’re few and far between.  The album rocks a little harder on (This Is) My Driving Song that also gets a light touch of mandolin, and was that one of those little guitar touches you’d associate with being a Barre signature? And then the instrumental Trinity is a late highlight – one that warms with the familiarity of a comfort blanket.

Last word though to Martin himself in his description of And The Band Played Only For Me – one he calls “just for me…the days of ballroom dancing, hanging on to the threatened theatres bands but carrying on with such dignity and style.” Pointed words and ones that also perfectly portray Martin Barre – always a man with dignity and style

A bit of live footage of the Martin Barre band: