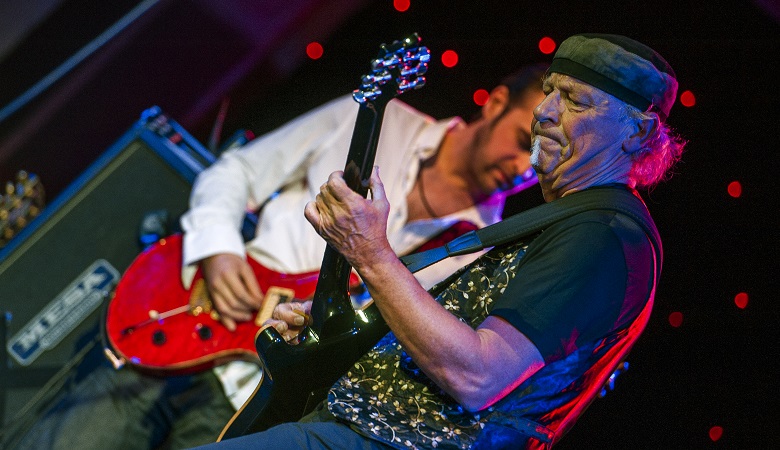 Forty odd years as a member of mega rock band Jethro Tull can’t really go unmentioned although now working away from whatever still passes as Tull, you can’t get more low key than finishing off a world tour downstairs in a local bar in an off the beaten track Lancashire locale.

The venue in the town known as Bar’lick – the rock and roll greeting of “Hello Barnoldswick” having  a ring of Ripping Yarns Gordon Ottershaw about it – is one that’s slowly becoming established as a compact, up very close and very personal, venue. Attracting some impressive names to its intimate confines, perhaps it was no surprise that Martin Barre should choose to end ten weeks on the road, several thousand American road miles and a few UK motorway trials under his belt, with something a little special.

Away from his Tull connections, Barre has a relaxed solo output, his most recent 2015 Back To Steel album accompanying previous solo outings Away With Words and Order Of Play, yet he has a wealth of music at his beck and call with which to deal a winning hand. The full electric four piece  has the flexibility to perform in different guises, but tonight found itself cut back to a simple acoustic duo  with Dan Crisp on vocals and supporting guitar. Toying with several possible options, MB unplugged, unrehearsed, the pair settled on MB – exposed. Fair enough really as the acoustic format is one where there’s no hiding behind the electric crunch of Minstrel In The Gallery of riffing away on Aqualung with just the one occasion when there was a request for a little reverb.

He mixed a set of a healthy peppering of Tull, covers including The Beatles and originals, the opening Wond’ring Aloud once again  allowed a moment to ponder the question “will the years treat us well?” and while his mate Ian Anderson may struggle to cope these days with the vocal challenges of the Tull material,  the Barre guitar prowess seems unusually bright; either that or the hypnotic nature of the deep red stage lighting. It was a rare  treat to see and hear him play exclusively acoustic (bar the obvious amplification) and in a manner some would call ‘sprightly’, Mr Barre having seen  70 summers. 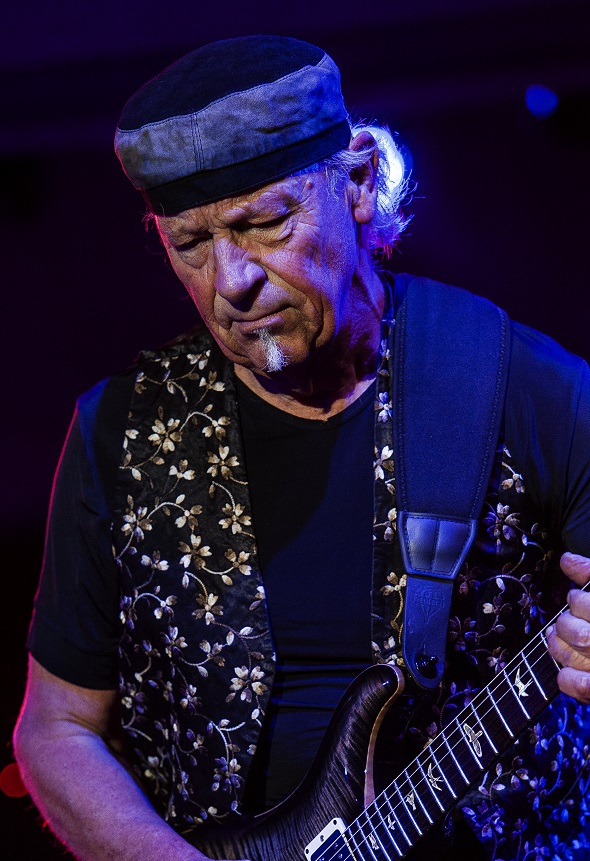 Highlights? With a couple of instrumental pieces decorating the set, it could have been meeting  what he called the challenge of the instrumental French Correction which was duly tricky and needing the sort of technical wizardry that only a class player could execute.  Teacher was the pick of the Tull material although a funky Fat Man moved the song away from its usual folky jig guise and perhaps of the covers, Blind Faith’s Can’t Find My Way Home. The latter met with an audible murmuring of approval from a discerning crowd, many of whom will have been along for many if not all of those 43 Tull years and wallowing in the chance to see a genuine but humble rock hero in such close quarters.

Earlier on, The Hiding Magpies had set the tone by stripping  down, thankfully not literally, not on a cold midweek night in Lancashire,  to an acoustic duo of Jake  & Ross. Their regular country rock and roll translating easily to the acoustic, ‘mind your head when you stand up’ format required in the BMAC. Playing through most, if not all their album, by gosh at a few points you could have closed your eyes and imagine Paul Rodgers was in the next room.

All words and live photography by Mike Ainscoe. Live shots taken at the 2014 Great British Folk Festival. You can find more of Mike’s writing on Louder Than War at his author’s archive. He can be found on Facebook and his website

Greta Thunberg is a generation gap that is like the Sex...

Gungfly Sign to InsideOutMusic; new album set for May – news

March 13, 2017
We use cookies to ensure that we give you the best experience on our website. If you continue to use this site we will assume that you are happy with it.Ok