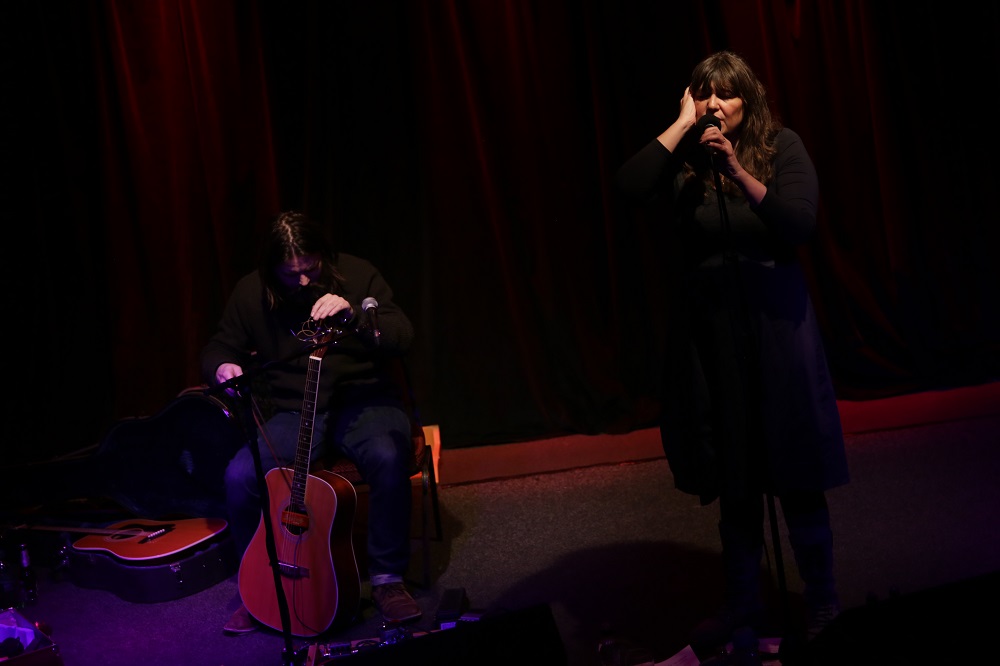 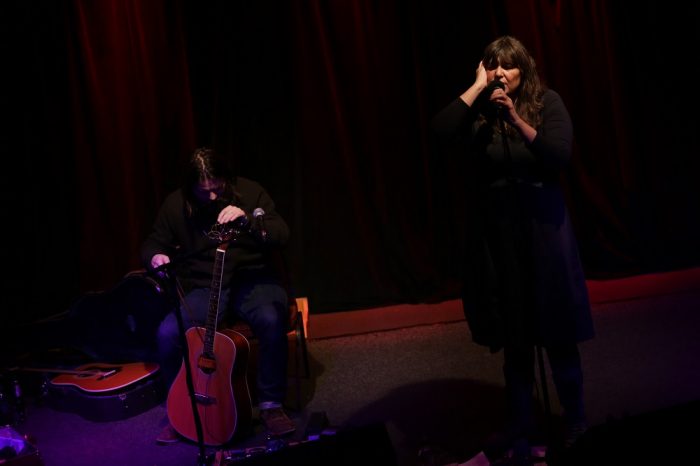 Marry Waterson and David A Jaycock bring their new set to the Hebden Bridge Trades Club for a fine set of folk. Paul Clarke reviews.

If the extended Kennedy tribe have dominated US politics for decades then the Waterson/Carthy clan have performed the same function for British folk.

Over the decades in a dizzying array of combinations they have defined and redefined British folk of the more traditional bent, but like all great artists they are always pushing the limits of what this ages old tradition can do.

Marry Waterson is the daughter of Lal, who along with her brother Mike, sister Norma and her guitar virtuoso husband Martin rescued folk when it was in the doldrums in the sixties, and through sheer Northern grit brought it back to prominence.

But make no mistake Marry is a formidable artist and lyricist in her own right who – after a digital exchange of song ideas – has teamed up with guitarist David A Jaycock to form a duo that is a very promising new outpost of the family business.

Sing Me Into Your Tune was the song they recorded through the web setting their stall out as Marry’s powerful voice weaves with Jaycock’s finger picking. As she says their collaboration is why she ‘bloody loves the internet.’

Their debut album Two Wolves was well received, but on this tour they are also playing tunes from their forthcoming new record which Marry revealed will be produced by Portisthead’s Adrian Utley.

As you might imagine coming from the first family of folk Marry is a great and charming storyteller explaining Death Had Quicker Wings Than Love was inspired by seeing exquisite maiden’s crowns for virgin women who died young which she found in a Robin Hood’s Bay church where she now lives. 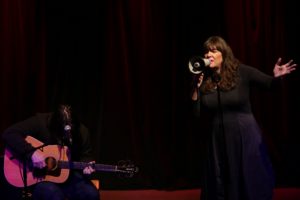 Jaycock takes a turn on vocals on new track Won’t You Lay before Marry is back on Teen and the Thief about trying to take your children’s pain away and failing. Not many folk artists use megaphones, but Marry ends up bellowing the words to Caught On Coattails written about a strange man who used to hang around Whitby.

The second half of this show kicks with an outstanding unaccompanied version of Ewan MacColl’s Exile Song, which she recorded for a tribute album for the great man, and then Laycock pulls out a fiddle bow a la Jimmy Page for Vain Jackdaw inspired by one Aesop’s Fables.

The highlight of the night was an emotional solo performance of the mournful Welcome Sailor which Marry remembers her mum singing and has passed down the generations. A relaxed gig ended with the audience howling along to the title track of Two Wolves, which may be about the duality of human nature, but no-one cared as hey unleashed their inner wolf.

Marry Waterson may have started later than some of her extended family but hooking up wth Mr Jaycock has paid off as his guitar work allows her clever lyrics to soar.

All words and images by Paul Clarke. You can read more from Paul in his author archive on Louder Than War.

The Dry Retch ‘A Kick In The Gulags’ – EP review