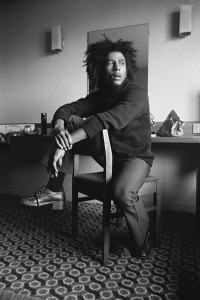 Warning: I’m assuming because everything in the documentary is ‘fact’ it’s impossible to “spoil” it for anyone. So be warned, the following review includes details that would, if the film wasn’t a documentary, be deemed a “spoiler”. If you know nothing about Bob Marley & want to remain like that till you’ve watched the film please don’t read on.

I’ve always thought of reggae as the great uniter in music. Virtually everyone who likes music likes reggae. You’re as likely to hear some reggae down your local indie disco, at a dubstep rave, round at a punkers party or over at a hippies hangout. One of many feelings I was left with after watching this film was that this was exactly what Bob Marley would’ve wanted. One of his strongest wishes was that people from all backgrounds & from all parts of the world should embrace one another, love one another and, in the words of the song, “get together and feel all right”. He obviously believed his music could be a force to reach this end and, as the closing sequence to a certain extent proves, this is the case.

It’s a lengthy documentary this one. In usual circumstances a documentary largely centred around talking heads that lasted 2.5 hours would be considered to be pushing it. That this is not the case here is a culmination of several factors. The stream of people who pass by us on screen were, to a person, fascinating, charismatic people. As very few interviews with the man himself actually exist this was essential for the film to work. Also of course, there are quite a lot of clips from live shows (a lot previously unseen) interspersed into the film which help break things up. And most importantly of course, Marley’s life, albeit short (he died aged 36), was fascinating. That the editing team managed to whittle down the hours & hours of footage and interviews they had to a coherent, watchable length is an impressive act.

It was obvious during the screening that the audience was really into the film. There was quite a lot of laughter (such as during the two minute cameo from lee scratch perry), gasps (such as greeted the information that Marley’s father was a 60 year old white Englishman & his mother only 16 when he was conceived) & at the end a round of actual applause went around the audience, something that hardly ever happens at the cinema and something that in my case was fuelled as much because I thought it a great film as because bursting into enthusiastic applause was a great way to exorcise the pent up emotional state I was left in.

There has been some criticism of the film in that it plays down the shadow side of Marley. The word ‘hagiography’ crops up in most reviews of the films, fuelled largely by the twin facts that the film was partly funded by the Marley estate (who opened up their archive to McDonald) and that his son Ziggy was co-producer. However i felt it came across reasonably balanced. It didn’t skirt around how he treated women or his wife (he had 11 children with 7 different women), it made some mention of the band infighting and his children talked about the fact that he wasn’t the best father in the world. Having said that, overall one is left coming to the conclusion that Marley was a genuinely ‘good guy’ with just the odd aberration, something that I have no reason to doubt was actually the case.

Despite being described as a “shy person” he obviously also had a powerful personality. He managed to make everyone fall in love with him. The film relates in detail his attempt to quell the politically fuelled gang violence rife in Jamaica at the time by organising a free concert during which he made the spur of the moment decision to get the two leaders of the opposing political parties up on stage & united hands between the three of them, something which was greeted with tumultuous applause while the audience all embraced each other.

It’s also a credit to the film that it doesn’t skirt around Marley’s final days. Another thing that came across about Marley was the strength of the man. This was, to a certain extent, his undoing. Because he was so strong by the time he collapsed under the effect of the cancer that finally killed him it was invasive, reaching throughout his whole body. There’s a powerful, emotional bit when it’s described how he lost his beloved dreadlocks. There were a lot of photo’s of him in these final days, photo’s that brought home to you how devastating it must’ve been for those around him to see the giant personality that was Bob Marley in the grip of the evil disease that is cancer. It was hard to hear that he skipped checkups that might’ve detected the illness earlier & that he was the victim of some bad medical advice.

This is a film for everyone. It’s a film for Marley obsessives and people who know nothing about the man. It will help everyone to understand Bob Marley a little bit better & works as a great introduction to the man for the uninitiated. You should expect to feel a sense of loss at the end of it – personally I had tears rolling down my cheeks for most of the second half of the film (not that that’s saying much – I’m an emotional bugger) so be warned, take hankies along. I get the impression that, as with The Artist, this’ll be a film that word of mouth will help promote as much as anything. And at the end of the day that must not only be incredibly rewarding for any director but also should be taken as a sign of a really great film.