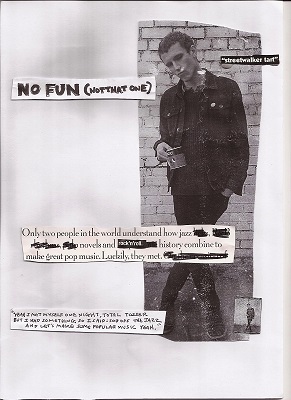 Mark Wynn – No Fun (Not That One)
CDr/DL
Out Now

Being a supporter of Burnley FC in the 80s and 90s always guaranteed several things. Raised hopes, sporadic success, and crashing dreams the norm for everyone. For me there was the addition of Oxo and meat & potato pies, being crushed on the terraces and someone pissing in your pocket (thankfully not mine!). There was also the No Nay Never fanzine which was hugely anticipated with its (ir)regularly released issues.

Away from the stadium were other fanzines. Fanzines about music, fanzines about College/University life, even fanzines about fanzines. Sadly they died away. It is therefore nice that cds from Mark Wynn should appear stapled neatly into his own fanzine (or is the fanzine attached to the cd?).

Hailing from the beautiful city of York, from which he is born and bred, Mark plays his one man catalogue with heart and soul. Maybe sometimes recording his own voice and/or instruments before performing over them again to create a ‘bigger’ sound, Mark is a punk star in the making thirty something years too late. He would have nestled in amongst the ‘less serious’ punk brigades of the 70s quite easily. That aside, there is still room for him to thrust his wit and whim upon us.

Essentially he’s a poet. Like a John Cooper-Clarke if you will, or a storyteller, ironically like a Ray Davies. Ironic, because one of the finest moments on No Fun (Not That One) is the hilarious Ray Davies Stole My Songs. He’s obviously too young to even remember Ray and Dave, but it doesn’t stop him revelling in his anger of the brothers. There’s even an excerpt of All Day And All Of The Night thrown in for good measure.

She Fancies Me That One In Age Concern is equally funny if not disheartening. Why does he never find any bargains in charity shops, and does Claire really love him? We’ll probably never know.

No Fun (Not That One) is crude and often in dire need or de-distorting, but it’s its sheer rawness that makes it appealing. It won’t set the world on fire but it may just make you want to play with the matches a little.

The Mark Wynn blog is here. You can listen to more of his music (and buy No Fun) from Bandcamp here. You can follow him on Twitter here and Facebook here.