LTW speaks to the talented Irish writer/actor Mark O’Halloran, writer and creator behind the wonderful award winning ‘Adam and Paul’ – the story of two Dublin heroin addicts daily crusade to ‘score’, brutal but very touching it’s the writing, word play and interaction between the two characters that makes it more Mid-Night Cowboy than Trainspotting.

Since its release in 2004 its gone on to collect many admirers becoming an underground favourite, The Irish Theatre Award winner’s work also includes ‘Garage’, and TV series ‘Prosperity’ – two very real stories from the outer fringes of Irish life… Mark talked to Louder Than War

Real pleasure to talk to you Mark, can you tell me a bit about yourself and how you got into writing

MOH: I come from a pretty large rural Irish family and in my late teens I decided to head off and become an actor, moved to Dublin and went to acting school. It was there where I got into the whole story telling side of writing.

Your performance as a heroin addict was outstanding, how did you get into that role so well, physically as well as mentally?

MOH: Well I was kinda naturally skinny anyway but I did deliberately lose a lot of weight for the part but to be honest my approach to the character was from the outside in rather than any Stanislavski an method approach. It was about movement and the sound of the voice etc. I have always been into music, rock’n’roll and the whole scene around it, the drug taking scene, you know. I’ve seen school friends lose themselves in drugs so it was something I was familiar with too. so all these things fed into the part.
Having Tom Murphy to act alongside was also a huge help. He was startling in his work on Adam & Paul and it really helped me to raise my game.

The role he played was pure brilliance, a very talented actor who’s sadly no longer with us…

MOH: Tom played the part of Paul exquisitely. He was a very well known actor; he won a Tony award on Broadway and had worked extensively in London etc. He and I had also been friends for a very long time, he was my best mate and I wrote the part of Paul especially for him.
In 2007 he was diagnosed with Non Hodgkin’s Lymphoma and he died very soon after. It was absolutely fucking shocking and a horrible time and something that took me a long time to get over. I’m asked about his performance in Adam & Paul all the time. I think it’s easily the greatest, the most perfect, the most beautiful performance in an Irish film I can think of. World class. I absolutely hate method actors and what they do, the way they ruin films by the size of their own ego but he didn’t have an ego, he was just… he just was the part. Very simple. Very beautiful.

His character Paul actually lives on in the end scene, which is great really

MOH: Well people often ask me what I think happened to his character afterwards. I think he was lost. Without his mate he was only half a person. I have an idea of him being burnt to death in a skip…something ridiculous like that.

Though it’s hard to tell who is actually Adam and who is Paul, why’s this? 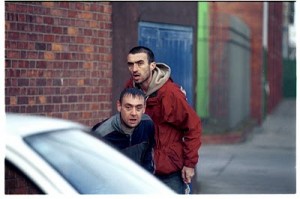 MOH: The film is called Adam & Paul but the viewer never gets to find out which one is Adam and which Paul. This was very deliberate. It was playing with the idea of namelessness. When you have a group in society that is referred to by a generic name (the gypsies say or the junkies) it becomes much easier for the public then to generalise in their hatred towards these groups. With the film I wanted the viewer to struggle to name the protagonists and maybe that would give them pause for thought. It’s odd but it is the one question that I am always asked ”â€œ ”Ëœwhich one is Adam and which one is Paul?’

What kind of reactions did you find to the film when it was released?

MOH: When it came out the film was a big surprise hit in Ireland. We had no budget to promote it, it came out of 12 screens but it just took off by word of mouth which is kinda beautiful. It was part of wave of Irish movies that came along at the time that offered new ways of looking at the city and the people who share it and the viewing public reacted to that.
I have spoken to a lot of users and ex users and their families too who loved the film. That was very special and gratifying.

I remember when Adam and Paul opened in Britain Tom was playing at the Royal Court theatre in London at the time and I went over to visit him there. I was so excited because our film was showing on one screen in the Odeon on Shaftsbury Avenue. However the day I went there was just me and one other person at the screening…haha, but I think its kinda got this underground life in Britain now, a small one but one never the less, and I still get e-mails and comments all the time from people who have just discovered it which is great.

Scenes from the film

MOH: A big influence on the film was Laurel & Hardy, there are references to ‘Way Out West’ throughout the film and I’ve actually stolen lines from it. I just love their innocence and friendship and their pure gorgeous stupidity, as well as that power struggle between them both. The petrol station scene is classic Laurel and Hardy because they don’t know the police raid is going on behind their backs and just stand there wittering on. Very slap-stick.

We did the whole film in 24 days, it was literally 3 takes and we were gone. It was some of the hardest work I have ever done but also the most rewarding. We had no trailers or make up wagons. We used just wait on the street between takes. We met a lot of characters in town that way; users and homeless people and they’d hitch over and say “what are you doing lads…making a film or something yeah! Oh,…me leg, its fucking killing me it is, really bad” which would make me laugh a bit but it’s a trait and one I used for Tom’s character.

My feature ‘Garage’ came directly after Adam and Paul. It’s the story of a fifty year old man with learning difficulties who basically gets accused of being a paedophile which sounds like a very dramatic story, and it is but delivered in a very restrained and dignified. It was a story that I heard of in my youth, in my home town and it’s that ‘small-town’ Ireland that I wanted to write about. There have always been stories of small town and rural life in Ireland but it’s normally played as a hilarious joke, but I lived and grew up in that scenario and to be honest there’s was nothing much funny about it at the time. Also at the time it was being made rural and small town life in Ireland was being torn asunder by the excesses of the building boom and I wanted to include some of that in it.
The premiering of Garage was very different to Adam & Paul as it happened in Cannes. Beautiful and insane.

Directly after that I wrote a TV series called Prosperity. It was a series that dealt with stories from the margins of the economy. About people slipping under. The title came to me first and the stories I developed by standing on O’Connell St Dublin on one day and observing or following people about. It was a tense snap-shot of the city and it something I am incredibly proud of.

After all that I took a break from writing for a while. I did a lot of travelling. I returned to acting for a bit. I then got back in to the swing of writing again. I currently have a feature that is financing. I also wrote a play last year that was staged at the Dublin International Theatre Festival, won the Irish Times Irish Theatre Award as best play of 2011 and will hopefully be seen at the Edinburgh Festival this year. For the moment I will continue writing for both film and theatre. I am very much enjoying the challenges they both pose. And who knows, I may even have a novel in me.

Adam & Paul is currently touring the UK as part of the Homeless Film Festival and can be seen in Newcastle on the 28th April and Manchester on the 30th April.