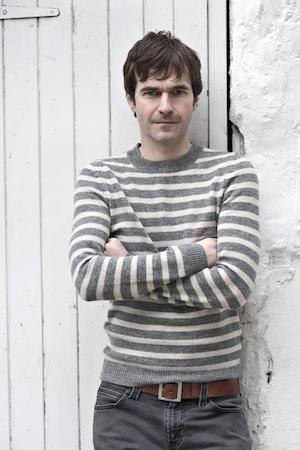 Readers will probably remember Mark Morriss as leader of The Bluetones, a band remembered fondly for a series of sterling records that were unfortunately lumped in with the tail end of britpop which, in the end, did them few favours.

A previous solo effort ((Memory Muscle) in 2008 was so low-key as to be invisible, despite collaborations with Bond soundtrack maestro and composer David Arnold. The Bluetones finally called it quits in 2011 and Morriss has been quietly working on this sophomore release.

The title track was written for a short-lived project called The Swedish Twins in unison with Matt Berry, although this is its first appearance in recorded form. It’s a sweeping, soaring thing with a tinge of flamenco threaded through the intricate arrangement. The lyrics are in reference to, as Morris puts it, “that moment when you’ve just turned out the light and everything remains semi-lit for a split second. It’s a revelation of a bad thing rather than a good thing.” There’s little that’s downbeat or oppressive about it; it’s a life-affirming handshake of intent that sets the tone for the rest of the album.

Space Cadet continues the highs; it has a woozy, past-midnight feel to it and Morriss lends a darker feel to his singing than his earlier material.

The lead single from the album is This Is the Lie. It’s a quieter, more reflective song than the rest of the set with acoustic guitar and wood-block flourishes framing a song about self-delusion. In isolation, it’s a cracker of a tune, but I’m not sure if it reflects the sheer joy of the rest of A Flash Of Darkness and may be off-putting to casual fans.

Consuela, on the other hand, is vintage Morriss. Heart-lifting melody, sweeping instrumentation that quickly takes flight and a lyric that references TV’s Jim Bergerac, it’s a thing of great beauty. You would have to be a hard-hearted cynic to dislike something this gorgeous. Personally, that would have been my lead single, but what do I know…

A cover of The Shins Pink Bullets is rather satisfactory and Guilty Again continues this rich run of songwriting from Mr. Morriss. He’s overhauled Nightcall from the Drive soundtrack and the acoustic treatment weirdly revamps the electronica of the original.

Morris tells us that following The Bluetones split he had a “lightbulb moment”, stating “I didn’t know what I was going to do, so I threw a lot of irons into the fire”. If this album is the result of that process, hopefully he’ll do it again soon.

Mark Morris is on tour in the UK in February, dates are on his website: markmorrissmusic.co.uk.

All words by Joe Whyte whose Louder Than War author’s archive, where you can read more by him, is here.