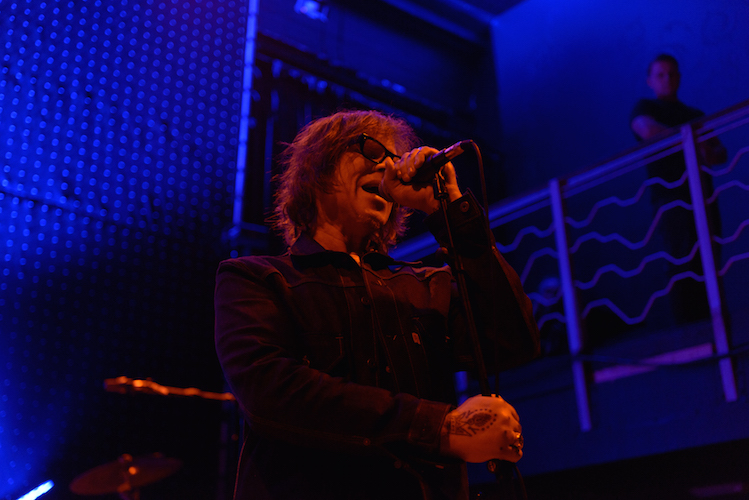 Mark Lanegan is a true musical chameleon as he scythes through genres with the utmost of ease, his brilliant songwriting and storytelling put to any music still sounds haunting yet beautiful.

The first thoughts that explode into my head about this evening is a sense of nervousness, apprehension and worry in a way. Having been a huge fan of various facets of Mark Lanegan’s work over the years I’d yet to see him live. As I mulled it over on the way to tonight’s show, what was he going to do, how was it going to be?

The only thing I can liken it to is the first time seeing Swans and Michael Gira, that angry face the earth shattering music, yet he seemed to be a wholly pleasant individual. I knew it wasn’t going to be like that, but at the same time there was still a sense of trepidation.

Upon entering the venue I catch the tale end of Sean & Zander’s set and their acoustic brand of blues was pleasant and interesting. They definitely had something different about them, not what I was expecting. As Mark took to the dimly lit stage, the crowd went wild as he opened with When Your Number Isn’t Up. A typically dark number as he snarls down the microphone, the exposed pain in his voice, conveyed with such effortless ease.

The opening part of tonight’s set is Mark at his most exposed as a sole guitarist backs him, his voice raw as he commands a congregation of hushed followers. The power, the angst all is showing, before he welcomes the rest of the Mark Lanegan Band to the stage.

Whilst the arrival of the rest of the band brings up the tempo somewhat it doesn’t quell Lanegan’s dark subject matter. He is a master purveyor of the darker side of rock music though, with tracks like The Gravediggers Song you cannot help but commend he is brilliant songwriting. The trance inducing beats help him to hold the crowd in the palm of his hand.

Whilst he says very little, there is no need for him to as everyone hangs on his every word. His lyrics are deep, intriguing and to me they raise more questions than they answer. However, the set seems to take a really interesting turn, the latter part is more focused on his latest work, which has a plethora of sounds that I wouldn’t expect to hear from Mark Lanegan.

Ode To Sad Disco hints at its disco vibe just by name alone and it truly feels like the venue has undergone a paradigm shift, he continues this theme all the way through the end of his set. Proving my previous suspicions that this would not be a straightforward evening, Mark is a musical chameleon he crosses musical boundaries with uncompromising ease.

This evening’s set has almost gone full circle, moving from the most primordial right through to something that wouldn’t be out of place in some clubs. This evening is a true musical journey provided by one of the greatest musical minds around.

He closes the evening out with a phenomenal cover of Soulsavers-Revival, followed by two more sublime tracks from his latest LP Phantom Radio. Both equally dark, yet The Killing Season is backed with this particularly upbeat track, the whirling synths perfectly complimenting his gruff tones. Yet the subject matter once again seems to be at the complete opposite end to the track, but that said he’s Mark Lanegan and he can pretty much do what he wants.

This evening has been one of a musical journey and as I leave, I’m blown away by his command over the audience despite barely speaking he held them in the palm of his hand. The set turned and twisted in all manner of directions and everyone went with it, never questioning just following the sign of a true master.

Mark Lanegan can be found online here: marklanegan.com, he’s also on Facebook and tweets as MarkLanegan.

All words and pictures by Lee Hammond. You can check out more work by Lee at his Louder Than War author’s archive.