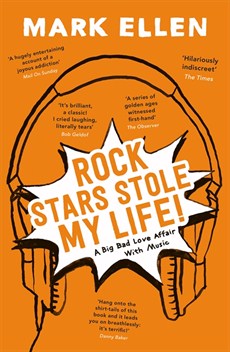 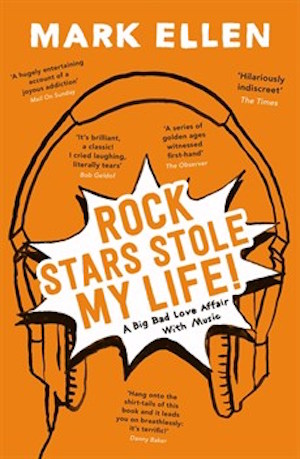 Mark Ellen recounts his time in the music press and his love affair with pop music. An entertaining memoir that bursts with enthusiasm. Louder Than War’s Craig Chaligne reviews the paperback edition that came out last month.

Following the demise of  monthly magazine The Word, Mark Ellen finally found the time to commit his trials and tribulations in the music press business to print. Starting with the first record he ever bought (Bernard Cribbins’ “The Whole in the Ground) he then proceeds to describe the way music rapidly took over his life. From his father’s deep disgust at the sight of The Kinks on Tops of the Pops to his first experience of rock festivals (described in all their gory details including the “toilet arrangements”), Mark Ellen trajectory seems pretty similar to a lot of the musicians from that found stardom in the late eighties, early eighties. However it sounds like he worshipped music and the people that made it to much to actually go past the final hurdle and become a fully fledged rock star (“If I was the least talented member of the fourth best cover group at a university, how was I ever going to make it as a musician”) . His few attempts at being in a band ended after a short lived combo called The Ugly Rumours (featuring future prime minister Tony Blair) were blown off stage by a jazz band.

From then on, Mark decided that the life of the rock scribe was made for him. Moving to London he begins his career as a freelancer for the NME, then a the height of its fame. His description of the stars of the paper and the way they treated freelancers is less than complimentary and the move to rival publication Smash Hits seems to have been be the wisest thing he could have done. Far from the ocean of snobbishness of the NME, Smash Hits concentrated on more main street pop acts aimed towards a more teenage audience. Ellen had to adjust a little for a start, a description of an interview with Shirley Easton illustrates that pretty well, but soon thrived in his role at Smash Hits under Dave Hepworth’s editorship. His outgoing personality also helped secure roles as a stand-in presenter on BBC Radio 1 covering for the likes of John Peel and David “Kid” Jensen and as co-presenter on a revamped “Old Grey Whistle Test” (the account of the famously disastrous of the Roy Harper/Jimmy Page interview being one of the highlights of the book).  Live Aid gets a whole 20 pages where in his usual self-depreciating prose, Ellen describes the efforts of the “amateurish” Whistle Test team to keep afloat the broadcasting side of this mammoth event.

Now firmly installed as one of the leading voices of the British music press, Ellen quits Smash Hits to found the highly successful Q but a move to rival publication Select sees him struggling with younger staff and makes him realize he has maybe come out-of-step with the youngest part of his magazine’s audience. His realization of the generational gap that has come between him and his readership at a festival triggers him to rethink his position towards music and set the wheels into motions for what would become MOJO. Unfortunately despite the initial success of MOJO, the corporate world and internet finally catch with him. The Word that David Hepworth launched after Ellen and him both departed from giant publishing company EMAP, despite the high quality of its content, struggled to secure the necessary advertising and readership and closed after 114 issues in 2012. Starting and finishing with an account of an absolutely extraordinary promotional plane trip with Rihanna enables Ellen to close the book on a balanced note, assessing that Rihanna’s behaviour is basically a by-product of the word that surrounds her and refusing to go down with the “it was better before” route.

For further info on Mark Ellen you can check his twitter: @MarkE11en.