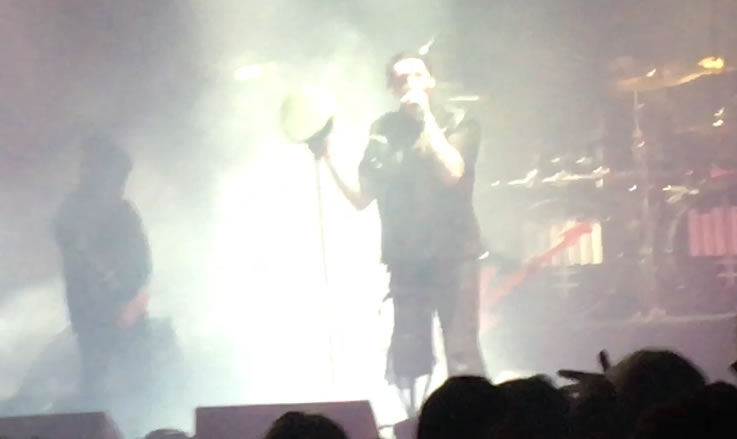 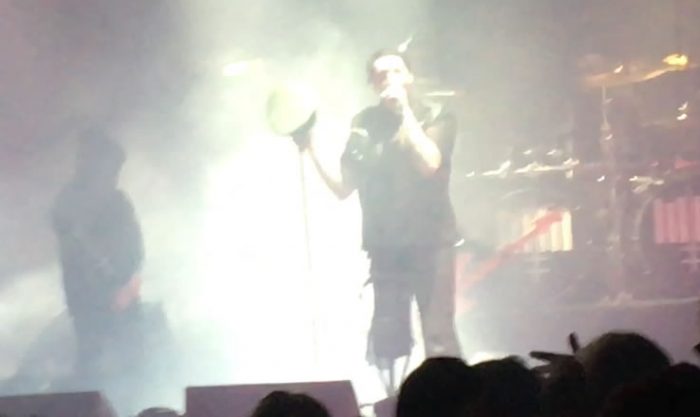 Nigel reports back from a ‘difficult’ Marilyn Manson gig at the O2 Apollo, Manchester for Louder Than War.

A first for me, I arrive at the venue and Louder Than War photographer Melanie Smith is being refused entry. Like all Manchester events we had arranged for our team to have passes to do a full review of the gig. This was done well in advance, so we’d had this scheduled in since the summer.

Apparently, whilst Manson’s PR were OK with this, his Tour Manager and the man himself had changed their minds and all but 4 photographers were excluded from the gig at the last moment. A few were emailed the night before – Louder Than War wasn’t, so we spent an hour trying to negotiate with ‘his’ people – to no avail.

One would think that a goth star very much in the descendent would need all the publicity he could get – alas no – it wasn’t to be, so this review unfortunately carries one blurry image with no apologies.

Manson, having been in the wars recently, hobbled into view while a couple of stage hands, dressed as surgeons, spooned him into a large gothic styled chair which sat at the back of the stage. Having bust his leg at a recent New York concert at the city’s Hammerstein Ballroom (a prop fell on him crushing the bones in his right leg) tonight was going to be free of any on stage antics.

The band blasted in to Revelation #12 while he rocked away in his automated wheel chair on the little dais normally reserved for the drum kit. He spun it around awkwardly one way, then another, whilst slurring into the mic, looking a little like that X-Factor Dr Who act, Davros. He later explained that the meds he was on had affected his voice, whilst later expounding the delights of alcohol over water – who knows?

Old classics like Welcome To The Dope Show were interspersed with tracks from his new album Heaven Upside Down which was released in October. Kill4Me with its spoken ‘Would you kill for me’ got a great response with the audience shouting back in affirmation, and looking around at them, I half believed they actually might.

With frequent costume changes between tracks, the show was a stop start mish mash of old and new. The two stooges frequently having to manoeuvre the singer into various positions on the stage. At one point he was lying on a hospital bed, awkwardly lifting his broken foot, which was in a large hospital-grey plastic brace, over to sit squarely on the edge, as he sang Eurythmics’ Sweet Dreams Are Made Of This – one of the night’s highlights and one which got the best reaction from the crowd.

He was manoeuvred again up to a waiting microphone while his leg, bent backward at the knee, was supported by a kind of caged stump, pirate style – and whilst I’m, trying very hard not to make fun of the afflicted, it was all rather comical, and I was feeling far from charitable at the time after what had happened earlier.

Hats off to the audience though – what you get with Manson is total dedication from the crowd – they knew all the words in a way that for some of the songs, he just flipped the mic round while they blasted the chorus back to him.

He was gracious and gave his all on what must have been a very difficult show. He congratulated ‘Manchester’ and how tough we all were, possibly alluding to the recent bombing, and left the stage in a howl of appreciation.

So what can I say? He put on the best show he could have in the circumstances and pissed a few media people off – big deal! Our travel bill is in the post!

Manson finishes the UK leg (ahem) of his tour on Friday 8th in Newport and Saturday 9th in London’s SSE, Wembley.

All words and photo by Nigel Carr. More writing by Nigel on Louder Than War can be found at his Author’s archive. You can find Nigel on Twitter and Facebook

No Photos were taken by Melanie Smith. Apologies to Mel on Louder Than War can be directed at her author’s archive. You can find her on Facebook and Twitter. Photography portfolio can be found here:mudkissphotography.co.uk.