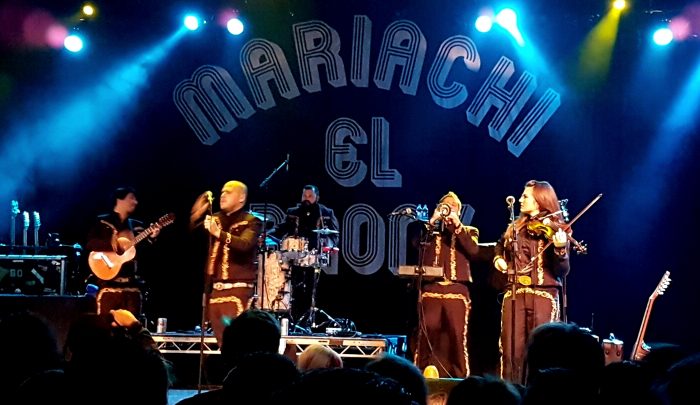 Playing as part of the Fireball – ‘Fuelling the fire’ package tour, alongside four other bands of differing musical styles, Mariachi El Bronx once more get the opportunity to play before an audience who may not be familiar with their style. Save for one ‘dude’ in a sombrero and Mexican type throw, the crowd are predominantly of the Ska-Pop variety and were seemingly unaware of the brilliance that was about to be bestowed upon them.

Opening with the slow burning ‘Right Between The Eyes’, the eight-piece Mariach El Bronx had the entire room transfixed in an instant.

Due to the nature of package tours, the set wasn’t the longest at ten songs, yet every song contained the perfect mixture of fantastic musicianship and passion. Mariachi El Bronx look so happy when they’re playing, and they look sharp too in their matching costumes. They look like a gang that you would want to join, and as they bang out tracks such as the insanely catchy ‘Norteno Lights’ it feels like you ARE a part of the gang.

By the time the set closer, ‘Revolution Girl’ kicked in, the band clearly had the whole venue in the palm of their hands, transforming a windy, autumnal Birmingham into a full on Mexican carnival, and doing so without any novelty value or cheesy showboating, and just by playing fantastic songs with love and joy.

You can find out more about Mariachi El Bronx at their official website, and their Facebook page.

All words by Christopher Lloyd. You can read more of Christopher’s writings at his author’s archive.