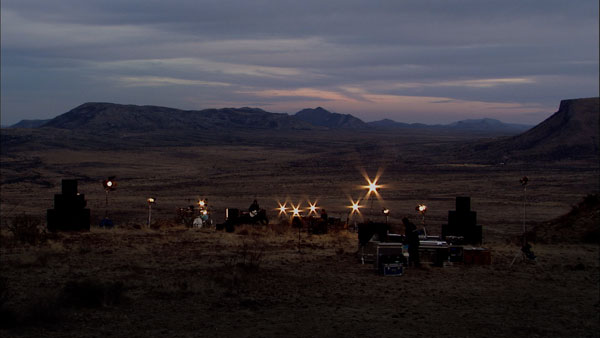 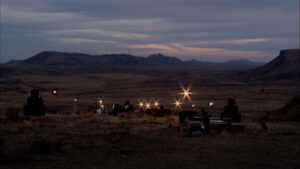 A few days after much Christmas cheer my hatred of impending mass drunken excess and endless ‘positive outlooks’ for a New Year as happens EVERY year – the same Corporate powers control and divide and will continue to widen society greed so it WILL be just as shit as the last – was worsened even more by the sad news of Benjamin Curtis’ death at the age of just 35. That’s no time for any life to end, especially one as talented and still so full of potential. My annual low January mood would definitely hit depths…

After listening again to the unmistakeable tight emollient rock and restrained psych/prog edges that catalogue The Secret Machines in a fit of Google-eyed wandering found this official DVD, the release of which had passed me by like a railroad train. Though the contents do not exactly contain what you might be led to believe from its tin it is a deserved additive to any SM collection or just as a piece of fascinating documentary film-making in its own right for that matter. So, firstly let’s get the gripe out of the way; ‘a concert for the UFO’s’? Personally I do not define a ‘concert’ by two songs. The cover even states “a performance conceived and filmed…” which after watching 50 minutes of the brilliantly shot and engaging documentary literally ignites with the band kicking jams through ‘Daddy’s In The Doldrums’ swiftly followed by ‘Marfa Song’ and then.., well, that’s it. Walk off into the desert. Credits roll. Perhaps there was some contractual reasoning the band did not play more, who knows but sadly my view of this release is a tad tainted by this very short set and the lack of admittance “there are only 2 live tracks here”. But, never mind, a slight disquiet has been aired and the whole is indeed an artifact of cinematic merit and much worth.

Background; Marfa, a town in Texas founded in the 1880s as a rail stop, which has served as an U.S. Air Force training base, become a haven for the contemporary arts but is possibly most famous for the phenomena of the Marfa Lights. These have been explained as paranormal, cosmological activity or possibly just the imaging of distant headlights from Route 67. Not being an expert on these matters I find the latter reasoning plain dull and so irrelevant for the purpose of these writings! The acclaimed artist Donald Judd moved to Marfa in the early Seventies and since then the artist community has flourished with the Chinati and Judd Foundations building art spaces and exhibiting works. Quite an appropriate setting filmed through the eyes and ears of the town’s varied inhabitants and three skilful intelligent musicians overseen by maker Charles de Meaux.

Using the vast disused Thunderbird Restaurant as their base the band are viewed in rehearsal/experimenting with sound and conversing with local characters and some of the stream of wealthy incomers who have literally transformed the town’s fortunes (though as is always the case not for all). Unlike many documentaries of this kind everything seems relaxed and natural, easily melting into the almost mystical vast landscape of Marfa and surroundings. Band members sit with young, old, rich and ordinary, some just wander through discussing the town, its past and obvious dollar-bill pathed future. A director of the Chinati Foundation explains why they can’t film with a specific piece of art in the background while he is of course happy to help with any other aspects of this project! The air of the place has “…nothing to do with rich people flying in buying houses”. 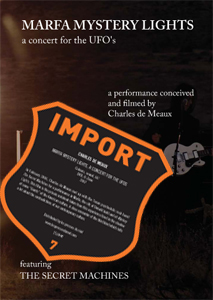 Seemingly with no set rigid interview structures it’s very easy to place yourself as a viewer into the setting and absorb the thoughts and beauty of inhabitants and land. Marfa even without its undefined strangeness must be a glorious avenue for creativity and simply breath in just to think. It inhabits its own space which Charles des Meaux effortlessly captures and leaving aside the “concert” hype is a remarkable piece of art and should be owned and shared.

Even though this release is some six years old I feel it very appropriate to bring to people’s attention and not just to remember the life of Benjamin Curtis. There is great footage of him leisurely talking, discussing his work and life, enjoying his time and musicianship, all so cruelly taken away at such an early age. Celebrate him. In its original edition of just 500 I’m not sure how many are still available but I obtained mine directly from the label in France a few weeks ago.

You can also follow me via Twitter @deadhead_TEQ and @bazzanagnagnag the latter where I babble endlessly on music, politics, life and society (lack of); expect bad language.