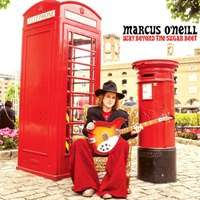 With the stresses and strains of touring and a subsequent breakdown, the album across as a therapeutic piece of work. Playing all the instruments himself, and stepping into the shoes of the piano and double bass player, Marcus has created a set of songs which aren’t too far removed from the Big Strides blend of blues, jazz and rock; more lo-fi and low key, they range from the lead track/single ‘Regrets, Secrets’ – a song of both despair and hope with a breathy vocal against a hushed guitar and piano, to the funky cum jazzy ‘High Enough’…’Solow’ (a play on ‘so low’ and ‘solo’ maybe) ups the poignancy levels, the melancholy harmonica adding to the atmosphere and delivery – sitting just a few cigarettes and whiskeys away from Tom Waits territory.

With the ten songs running just over half an hour it’s also worth checking out the two music videos which go with the record, particularly the ‘Oilseed Fields & Innocent Dreams’ clip which features a terrific backing band somewhat removed from the norm.