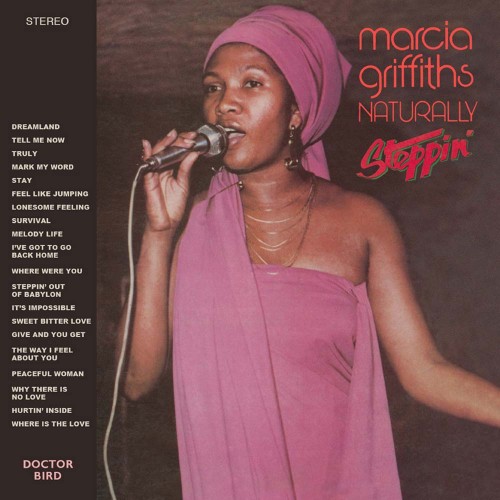 Twofer bringing together the two solo albums by Marcia Griffiths, the first of which emerged 14 years after her career began in 1964 at the age of 15. LTW’s Ian Canty hears one of Reggae’s great voices on fine form

Although Marcia Griffiths was thrust into the international spotlight with her tenure from 1974-81 as one of the I-Threes (they were Bob Marley’s backing singers in the 70s), before that time she had made a giant-sized impact on Jamaica’s music scene in her own right. She continues to perform today, but we have to go way back to 1964 for when she first got behind a mic with Byron Lee’s crack outfit the Dragonaires. Griffiths’ abilities impressed the legendary Clement Dodd to such an extent that he immediately offered her a recording contract with Studio One. During her time with Dodd she set down a number of duets and made a connection with Bob Andy which would prove fruitful. They formed the duo Bob and Marcia and had one of the biggest hits of the original Reggae craze with the wonderful Young, Gifted And Black (originally recorded by Nina Simone and co-written by her with Weldon Irvine).

This record really was a revelation, the song’s message of hope and defiance was perfectly and joyously delivered by Griffiths and Andy. It really seemed like a totem of the progressive times the early 70s promised to be. Bob and Marcia had another success with their Pied Piper, but as trends changed and Reggae gave way to Glam they brought their partnership to an end. The young Skinheads that on the whole made up the music’s biggest fans grew their hair and tuned into the next thing, leaving Reggae in the doledrums for a few years bar the odd novelty hit.

Undeterred by fleeting trends, all along the way Griffiths recorded solo and scored many Jamaican hits. But it was the link up with Marley in the I-Threes alongside Judy Mowatt and Rita Marley (who both had more than decent solo careers of their own) that globally put her back in the public eye again. She spent seven years with them and this period saw Marley’s biggest successes before his sad demise.

She still kept busy recording and with the upsurge in Roots Reggae that accompanied the Punk boom, she was ideally placed to benefit. Her very best work, like the albums presented on this new reissue, were her solo efforts. She has a wonderful, silky voice tinged with sadness and to hear it just as background vocals would have been a total waste. Between her commitments with the Wailers she issued Naturally and Steppin’ (her second and third LPs respectively), both beautiful and desperately needing to be heard. It entirely fitting that these combine as one of the first releases on the reactivated Doctor Bird imprint.

Naturally was heralded by the Dreamland single that would be recorded later to much acclaim by Bunny Wailer. It made for the perfect introduction to the album, elegantly and measured singing backed by the cream of JA’s session players on tip top form. On occasion old rhythms would also be utilised, like on Tell Me Now, always a favourite which Marcia recorded four times in total. She’s at the very top of her game here, whether on Feel Like Jumping which has echoes of Skinhead Reggae of the late 60s, or the hints of Gospel on Lonesome Feeling. Put simply there are some singers who, regardless of their technical ability, sound like they could be singing their shopping list instead of baring their souls. Then there are others who bring you in, you just feel they mean it, an emotional link is forged by them. Griffiths was firmly in the latter group.

On Naturally the balance is just right. Tightly constructed tunes with pitch perfect vocals and instrumentation combine with an adventurous outlook. On set closer I’ve Got To Go Back Home the verses are Soul styled with the chorus shifting into Roots Reggae – it all works wonderfully. There are quirky and interesting touches throughout like on the ultra-catchy Truly, which keeps her far from the Lovers Rock she no doubt had a hand in inspiring but easily transcended, due to the depth of her talent.

A year later Steppin’ came out and it is a terrific follow up. The near title track Steppin’ Out Of Babylon shows she was more than a match for even Max Romeo or Junior Murvin in the conscious Reggae stakes. This is prime 70s Roots ideal for Dubbing up, but most thrilling in its original incarnation. There’ a slight Country Soul influence on the heart-breaking Sweet Bitter Love and the nursery rhyme lyric to Give And You Get is buffered by great horns and driving backing. Marcia’s voice is of course flawless here – she could make a statue cry on Peaceful Woman. I’m Hurting Inside is the closest she gets to the Wailers’ sound, hints of Exodus on this one, but the double-tracked vocals steer it far away from a carbon copy – she owns it.

It is quite frankly baffling that neither Naturally or Steppin’ made much of impact outside of Jamaica. Both are the sound of an artist at the peak of her considerable powers, with sympathetic and pin-sharp support from fine musicians. With full sleeve notes giving a potted history of Marcia and the albums (expertly conceived and realised by Stephen Nye), if you have any interest in 70s Reggae you will be champing at the bit for this musical biscuit. This is the first Doctor Bird reissue it has been my pleasure to review and I have to say, they’ve set the bar tantalisingly high.