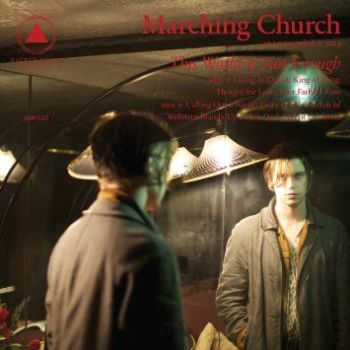 Marching Church – The World Is Not Enough (Sacred Bones)

It’s clear to that this is going to be a rather dark as they contemplate a life of doubt, an intense opener though likely to catch anyone off guard. Yet the albums turns to a much lighter affair with the addition of a hefty amount of brass, underpinning Elias’s lacklustre vocals. King of Song is at complete odds with the opener yet it still possesses a great ramshackle quality with such a dense level of instrumentation.

Yet Marching Church strip back those dense layers, with the rather unnerving and unsettling Hungry For Love, without the layers it reveals a rather intriguing dimension to an album, which has yet to find its way. It’s a seven-minute passionate monologue set to a bizarrely sparse soundscape. Yet Elias’s brooding vocals are captivating and the intensity remains but from a completely different viewpoint.

This slightly stripped back theme continues, with flashes of exuberance Elias’s drawl sitting perfectly atop these haunting tones. There’s a distinct depth to the album, every track has its own story to tell and whilst it may not always be a full on onslaught there’s an unprecedented intensity. Matched by the slower deliberate pace of the tracks, yet Every Child takes the album to a slightly different place.

It’s marked as a portrait of Creole Jazz musician Wellman Braud, there’s an obvious hark back to Wellman’s sound that underpins the track yet Elias’s vocals lurch all over the track in a hurried manner. All of which adds yet another facet to this album, yet he’s quick to return to the more sparse arrangements with another epic track in Up A Hill.

The jangling guitar underpinned by a heavy bassline, these incredible soundscapes are beautifully thought out and whilst they’re sparse the layers, which are present, are so dense. All of which creates this disturbingly haunting and atmospheric intensity, conjuring up a world of intrigue.

The album closes in a similarly dark fashion, yet the vocal is a little less unnerving, however still another beautifully orchestrated track. Marching Church has produced something, which is ramshackle yet intense, intriguing and yet strangely inviting despite the underlying darkness which appears to underpin the whole album.