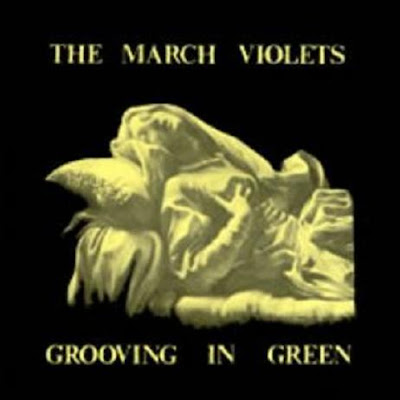 What is this thing called Goth? Often batted about as some sort of insult it seems to be a catchall term for loads of disparate bands who sound nothing like eachother apart from maybe having once worn a black pullover or something. The March Violets emerged from Leeds University in 1981 and their early career ran in parallel with the Sisters Of Mercy, who released their first couple of singles on their Merciful Release label.

Because of this and their dark brooding flavour the March Violets are part of the Goth diaspora and lumped into this collection of groups. Whilst their music does err towards the dark side and they deal in a fine melancholy they also have a garage rock and psychedlic tinge to their muse as well as some fantastic, post punk shrapnel guitar from founder member Tom Ashton.

Reformed a few years ago the March Violets are still built around three original members- the afformentioned Ashton, the bearded and sonorous frontman Simon Denbigh and the strikingly, scarey, esoteric beauty of Rosie Garland- whose operatic tones contrast perfectly with Denbigh’s gutters growl. The songs clatter and grind around the drum machine and their powerful fug fills the rooms.

In many ways they resemble Laibach, a multi sexed group who take a walk on the dark side and have a sly sense of humour. Laibach themselves played here a few weeks ago and it’s interesting to contrast both groups fates back to back. Whilst the Slovene band are respected as art house pioneers, the March Violets lie slightly discarded in the goth bin- this is very unfair because they have the same kind of artfulness and originality to their sound and are far more deserving of inspection from the herds who don’t know about them.

Tonight they coax a great reaction from the audience with a mixture of their own standards and newbies- all driven by the sweating drum machine which could have done, like the whole band, with being a bit louder and more incessant. Their relentless assault and the swooping vocals of self styled ‘lesbian vampire poet’ Rosie set the atmopshere, an atmosphere that the band very successfully deal in. Simon strokes his beard looking like one of the great rock eccentrics, his eyes twinkle with the dark humour of it all and the band’s timeless sound echoes through the decades.

After their initial success they changed line ups into a sleeker more pop version that sold records but lost the original following. Now back to where they started they are enjoying their weirdness and off the wall kooky behaviour and two releases in are becoming staples on the dark side circuit with age suiting them and their oddly timeless sound very well indeed.

This is a successful comeback, a reaffirmation of what made them good in the first place, a twisted eccentricity that the late, great John Peel loved about them and as the set ends the band float out of the building having tickled the erroneous pleasure zones of the rather black clad audience.