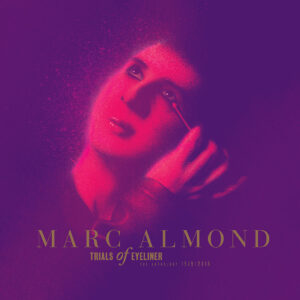 It’s difficult to know where to start appraising Marc Almond. For many music lovers, he has been a constant in our lives for longer than us, and probably he, would care to remember. A man who through a huge expanse of solo work and collaboration has entertained everyone, and that is literally ‘everyone’ in one way or another during his sparkling, lurex and rubber filled career.

He has just signed his first major record contract in twenty years, and Universal are quick to release this ten disc, 189 track anthology. But, far from being something predictable and commercially safe, this is something quite extraordinary. Almost everything you could possibly want to represent his career to date is present (sure, you can’t have everything, and tracks like Martin and Hendrix Medley from the bonus 12” of the The Art Of Falling Part album would have been simply the icing on top of the existing icing on the cake), and there at least one thing that everyone will adore from this set.

The emergence on the pop scene as part of Soft Cell with fellow polytechnic student David Ball saw the duo take the music scene by storm. The singles that immediately ensued following the multimillion selling Tainted Love (backed by a second cover version, Where Did Our Love Go ensuring that they made no song writing royalties whatsoever from its sale), ensured that everyone knew their name.

Coupled with the criminally underrated Marc And The Mambas whose dark/new wave/gothic albums Untitled and Torment And Toreros saw Almond work with the likes of Matt Johnson, Annie Hogan and J.G. Thirlwell, he lost favour and for a short while disappeared. His return with solo work saw him become a regular chart fixture albeit at the lower end, but tracks like The Boy Who Came Back, Stories Of Johnny and Tears Run Rings slowly saw him back in our lives and inevitably, our hearts.

Trials Of Eyeliner sees three distinct themes – History showcases Marc’s favourites, album tracks and B-sides over four cds recounting Soft Cell’s The Girl With The Patent Leather Face (a track which is simply stunning in its naiveté and roughness), Sex Dwarf and Meet Murder My Angel as well as one of his finest moments Catch A Fallen Star (Marc And The Mambas). It also introduces us to Jacques Brel, the Belgian writer and actor considered to be the master of modern chanson with The Devil (Okay), a writer who along with Scott Walker was a major influence. Almonds version of Brel’s Jackie (Jacky), which was also recorded by Walker, remains one of the finest pop songs ever and rewarded him with a top 20 hit in 1991.

Second section, Singles compiles all his official single releases not already appearing in the first section in an almost chronological order, and includes appearances from Soft Cell, the Mambas and solo work. Works of Soft Cell genius such as Numbers, Soul Inside and Down In The Subway rub shoulder with duets with Bronski Beat, Gene Pitney and Sarah Cracknell, and a stream of superb solo pieces in A Woman’s Story (still bringing goose bumps to this day), Ruby Red and Melancholy Rose. Once more, the tracks that may have once been forgotten re-emerge to engage us once again.

The final three cds come together as Gems, a selection of rarities, collaborations and soundtrack contributions which includes eighteen previously unreleased tracks from Marc’s own collection. Coil, The Burmoe Brothers and Othon aid a collection of, well, gems, which also consists of remixes and original demo’s no doubt pleasing the Almond die-hard. The Exhibitionist, Sequins And Stars and Dark Is My World perhaps hint at the workings of his career in mini sound-bytes, but as he turns 60 next year the closing track I Created Me is a fitting close to a release nothing short of perfect. He may have created himself or even been a product of many different times and instances but one thing remains – Marc Almond is a British institution and a well-loved one at that – and Trials Of Eyeliner is the exceptional story of a national treasure.