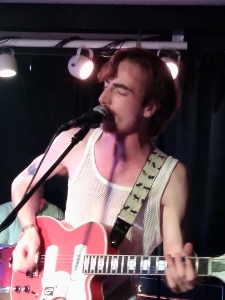 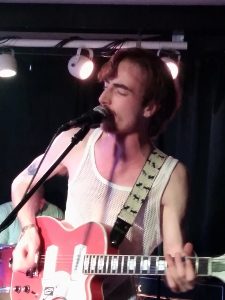 Louder Than War’s Roxy Gillespie catches this one day urban festival, Manny Fest #001 and finds some amazing talent on offer.

You can’t get more grass roots than The Peer Hat in Manchester. These basement venues serve to keep the music industry alive. The chances are your favourite big name band started in these fabulous, intimate little pub and clubs, hauling their own gear down flights of stairs after shivering on the side of an unnamed motorway as the van breaks down for the third time that month. These are the proving grounds.

Manchester has an abundance of these venues, and the people willing to put in the work to make these musical gatherings happen. Manny Fest #001 was the latest of these mini-festivals, presented by Fuzz Thursdays and The Psymmetry Collective. It started at two in the afternoon and carrying on until the 11 pm curfew. It proved to be quite a line-up and a great way to spend a cloudy, grim Saturday.

The Della Noirs were the first band to hit the stage. Relative newcomers to the scene, they had a strong sound and plenty of ambition to back it up. The set really hit its stride during the third and fourth songs, Enemy and I Don’t Write Love Songs But If I Did They Would Sound Like This, which lifted the set above the acceptable but more generic tracks before them. The Della Noirs showed they have the potential to become a potent musical force.

Sadly, the next band, Saint Ivy, did not make it in time for their 3 pm slot, so the wonderful Shallow Waters were the next band entertaining the punters. Their moody, atmospheric sound just gets better and better. This smouldering psych-rock just blows you away. They soared through the set; an immersive and powerful experience. It was hard to pick any stand-out tracks as they were all premium quality, but the set included I Am Not Blind and Silence. It finished with the excellent Take My Sun, I’ll Rise.

The 99 Degree have a distinctive surf sound which sets them apart from a lot of bands on the current circuit. They were on top form, with one of the best sets I have seen them play. Their Spaghetti Western styling never strays into total fantasy with their down-to-earth Mancunian persona often merging the North West with The Old West. Newer tracks merged with those from their first EP Boot Hill Surf Club, including Young Flame and a really special rendering of Bed of Bones. They finished with old favourites The Banshee and Dead or Alive. Yee Haw!

The edgy, taught sounds of garage punks Chupa Cabra played next, their high octane sound fuelling the already buzzing atmosphere. Always a little bit raw and dangerous, the night saw them at their brittle best, with tracks such as the excellent Violent Urges and Sides of my Skull. Another band who have fully settled into their style, filling it with substance over the last few years, Chupa Cabra continue to bring an excellent frisson to the live scene.

Another band who fill the room with no nonsense alternative rock verve, The Slumdogs continued to ramp up the excitement with their hard hitting music and great stage persona; pinstripes are definitely back in. They veered from punk swagger to tighter, more stylish tracks throughout the set. The special bass line defining Shapeshifter and its slightly sinister guitars made it a memorable, although all the tracks were strong. Monster from The Slumdogs forthcoming EP Where’s Your Sanity also took the set up another notch. Superior from start to finish.

From the vitality of The Slumdogs, Gardenback looked as if they might be a tamer proposition. It turned out their distinct sound might have been quite different, but their music was vigorous and engaging; garage rock at its best. With truly original opening tracks like Sleepless and Do No Evil, the proceedings halted temporarily due to technical difficulties, which had the sound crew running all over the stage. Attributing the next song Shame to the bass player/ vocalist’s embarrassment at a guitar lead failing mid set, things re-started. Other high spots were How The Rabbit Lost Its Life and Health and Wellbeing.

From the pared-down look of Gardenback, Wild Fruit Art Collective had a theatricality all of their own. The band have a great dramatic sound, which now includes input from the outstanding Beija Flo adding to the already intense vocals. With a trombone as well, the sound was fuller than ever, taking the band in a new direction. The music moved through the full range from quieter moments to crescendos of sound in a set that included Fabric and recent single Every Conversation Is A Sale. Always quite experimental, the whole thing came together with a messy brilliance providing another superior segment of an exceptional event.

Loud and uncompromising Cannibal Animal brought their alternative rock barrage to finish the evening. Good and loud they hit the audience right between the eyes with their ballistic sound. The set included the outstanding I Feel Alive, Simply Sinking and Elipsisism. This was their first trip to Manchester but hopefully not their last. A fine way to finish Manny Fest #001.

There are a few other shout-outs needed here. This was a great day that would not have come about without the hard work put in by Macauley Remmer of Fuzz Thursdays and Greg Dixon of Psymmetry Collective who booked such remarkable bands. The next is to Matty the sound engineer. He brought out the true sound of the bands throughout the day and helped the audience hear them at their best; one of the unsung heroes of the music industry.

As this was Manny Fest #001 it looks as if there is a chance that this will be the first of many. This is a quality which deserves to continue. Get out and support your grass roots talent. I command you.