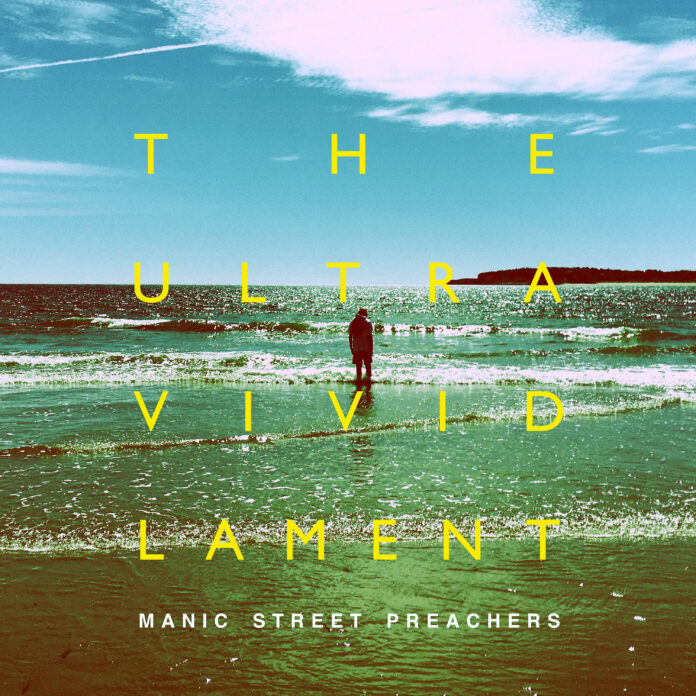 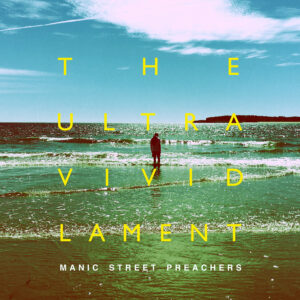 Manic Street Preachers return with their 14th studio album. The Ultra Vivid Lament is an astounding collection of powerfully compelling tunes, positioning it shoulder to shoulder with the band’s very best. Gordon Rutherford dons the feather boa and reviews for Louder Than War.

From the very beginning, it’s been about relevance. They had to matter. Remember the startling proclamations that preceded the release of their debut, Generation Terrorists? Here was an album – a double album no less – that would sell sixteen million copies all around the world and be forever hailed as the greatest rock album ever. Following that, they would deliver the ultimate mic drop by disappearing forever. Their brashness started a conversation, one that polarised opinion like nothing else since the Pistols; you either hated them or (just as they instructed us to) you loved them. Either way, everyone was talking about them. Objective achieved.

Now here we are, almost thirty years later. Relevance is still critical to Manic Street Preachers, although long gone are the brash predictions and the incessant slagging of other artists to garner column inches. Today, older and wiser, they crave a different kind of relevance and seek validation by letting the tunes do the talking. And by God, can those tunes talk. Rest assured, The Ultra Vivid Lament, the fourteenth studio album of a glittering career, is categorically relevant.

Similar to This Is My Truth Tell Me Yours, which opened with the profoundly sad The Everlasting, The Ultra Vivid Lament begins by gazing into the rear view mirror. Nostalgia isn’t a new fad, then. “In the beginning/When we were winning/When our smiles were genuine,” lamented James Dean Bradfield (ultra vividly) back in 1998. Musically, the glacial Europeanism of Snowing In Sapporo may feel like a tune that has fallen directly out of 2014’s glistening Futurology, but thematically, it’s reminiscent of The Everlasting as it contemplates those halcyon days when it was “the four of us against the world,” staring out with “make-up running eyes.” Bradfield wistfully recalls the nights spent under neon loneliness on their 1993 tour of Japan. “There are no holes in my recollections/Time has stopped and is perfectly frozen/These days may never come again/My optimism resembles a dying friend.”

It’s all in the past. To remain relevant, everything must go and despite the dewy-eyed sensibility of this album’s opener, Manic Street Preachers understand the need for change better than most. Evolution is in their DNA. Just consider their first four albums: a run where each one initially confounded as it deviated sharply from what came before. It’s almost as though Snowing In Sapporo is offered up first as some kind of cathartic exorcism, putting the ghosts of the past to bed before we can look ahead.

And look ahead they do. Like so many Manics albums, The Ultra Vivid Lament once again redefines the band, taking them forward another significant leap. With its rapier-sharp pop sensibility, it is a collection more akin to the band’s aforementioned homage to Europe, Futurology, than it is to their most recent release, the occasionally ponderous Resistance Is Futile. However, it is an upgrade on Futurology. Where that 2014 collection started powerfully, but faded, The Ultra Vivid Lament maintains its greatness throughout. It is the first Manic Street Preachers album for a long time where I could not hone in on (at least) one track and wish it wasn’t there. Quite simply, there is no filler on The Ultra Vivid Lament, making it the Manics’ finest album for many a year.

One of the most remarkable things about Manic Street Preachers isn’t necessarily the fact that every album is different, that their evolution is constant and inevitable. It’s that in the midst of that progression, there are some things that never change. Nor should we want them to. Nicky Wire remains an extraordinary wordsmith, whilst Sean Moore continually reminds us that there are no better rock drummers. As for Bradfield’s characteristic voice, it is as good as ever, maturing like the finest vintage wine. It’s richer now, more melodic. It effortlessly swings from powerful and soaring on Snowing In Sapporo to soulful velvet tenderness on Blank Diary Entry. The latter also brings to mind another constant.

Unsurprisingly, we still have the dogma. Manic Street Preachers have never been afraid to parade their political colours, however they are subtler about it now. Perhaps it’s the cold realisation that Utopia is unattainable. Or maybe it’s that they are just unsure what kind of change is required. To illustrate, on the first single from this album, Orwellian, Bradfield sings, “We live in Orwellian times/It feels impossible to pick a side.” Sitting on the fence in their middle age? Well, not quite. In the same song, Wire’s always-prescient words go on to bemoan, “The people machines still making fools of us.” You won’t be surprised to learn that it’s not the only political jibe in this collection, the most overt being, “Don’t let those boys from Eton/Suggest that we are beaten,” from Don’t Let The Night Divide Us. Still political then, albeit now that the barbs are much more of a gentle poke. Gone are the days when they would cheerfully advocate the storming of the Palace.

Then we have the most obvious constant. The Ultra Vivid Lament is all about the songs. It’s wall-to-wall tunes. Hasn’t it always been? Despite the panstick and sloganeering, Manic Street Preachers have always been a band with melodies running through them like the words on a stick of rock. Take their 1994 Top of the Pops appearance, when they performed Faster, for example. Flanked by flaming beacons and resplendent in military garb, it became the most complained about three-and-a-half minutes in the programme’s history.

Perhaps it was Bradfield’s balaclava that tipped middle England over the edge. When it came down to it, the schlock factor was just another way to get the chattering classes conversing. At the heart of that particular track lies a melody that could come from the pen of Bacharach and David. They know, and love, tunes. They always did. You just need to check out their catalogue of cover versions. Therefore, we shouldn’t be surprised when they drop an album like The Ultra Vivid Lament, the ultimate tunes album.

It’s fair to say that it’s a grower. It lacks anything with the immediate impact of Futurology’s Let’s Go To War or Your Love Alone Is Not Enough from Send Away The Tigers. But before long, each and every one of these tracks grow on you like a second skin. They seep deeply into your consciousness. It is a quite beautiful collection, one where intricacy and finesse dominate, rather than anthemic bombast, with every song having the space to grow and develop. That is quite possibly a factor of The Ultra Vivid Lament being the first Manics album to be initially conceived on piano rather than guitar.

The band have spoken about the album being inspired by something they describe as “a formative years record box,” one comprising the likes of ABBA, post-Eno Roxy Music, Echo and the Bunnymen, Fables-era REM and Bowie’s Lodger. Some of that is immediately evident. Take the jangly, Peter Buck-like guitar motif of Into The Waves Of Love, or that piano line shamelessly ripped from ABBA on The Secret He Had Missed. But whilst those influences are present and detectable, at its heart, The Ultra Vivid Lament is, unquestionably, a Manic Street Preachers album. It has their unmistakable stamp all over it.

Let’s return to that theme of reflecting on the past. Not as blatant as Snowing In Sapporo’s words, there are some wonderfully understated musical throwbacks. The band consider The Secret He Had Missed to be the long-lost cousin of The Girl Who Wanted To Be God, from Everything Must Go. If so, then Afterending must be the aunt-by-marriage of the previously mentioned The Everlasting. Furthermore, Bradfield’s piercing lead guitar intro to Happy Bored Alone is reminiscent of Die In The Summertime from The Holy Bible. Plus ça change.

It’s a collection littered with musical highlights. I’ve referred already to so many outstanding songs. Another marvel worth calling out is the haunting and atmospheric nobility of Diapause. Additionally, there are little snippets of greatness, the type that elevate Manic Street Preachers into a special category. Blank Diary Entry begins with the most sublime Spanish guitar, before Lanegan’s vocal slides in to accompany it. It’s a gorgeous moment that introduces a breath-taking composition. Then there is the first forty seconds of Quest For Ancient Colour, the album’s stand-out track, when Bradfield sings accompanied only by his piano. The sparseness and elegance of the music serves to emphasise quite how wonderful his voice is. So many little trinkets for us to keep and treasure.

Let’s wind down this piece by coming back to the album’s final song, Afterending, because it is a very special track. Manic Street Preachers have reached a point in their career when every release brings the inevitable questions. Have they passed the apogee of their arc? If so, where next for this trio? In the Afterending, Bradfield sings, “Sail into the abyss with me,” before closing the song, and the album, with the line, “The near future has been and gone.” It makes you wonder. What if this is it?

We began by talking about this band’s eternal need for relevance. Here, in 2021, thanks to the brilliance of The Ultra Vivid Lament, Manic Street Preachers remain as relevant as ever. They still matter. We are still talking about them. And if they do now intend to “sail into the abyss,” they can do so safe in the knowledge that they always mattered. We have never stopped talking about them.