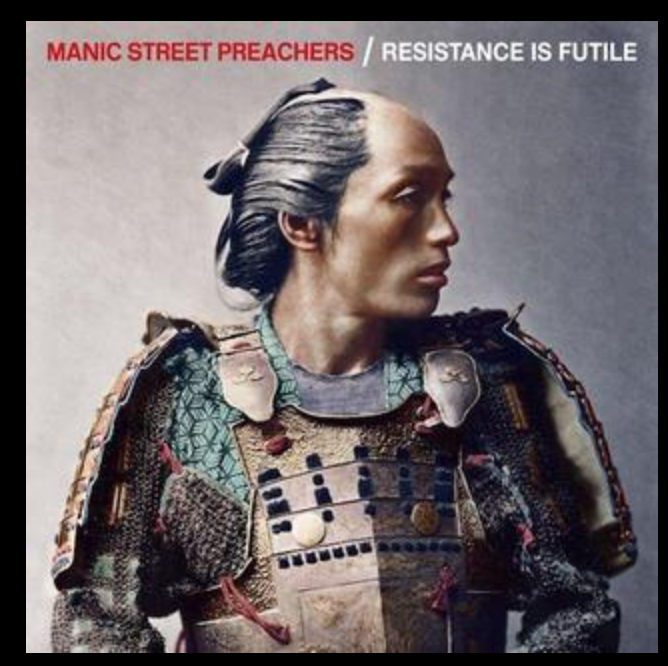 The Manic Street Preachers seem to have been part of our lives forever. The band used to send LTW editor John Robb their demo before they were signed and he still has the demo and long letter from Richey. Robb also wrote many of their early features.

Our site is named after Fidel Castro’s famous quote when the band met him in Cuba and we have followed their fascinating career with its battle between artful underground, thought provoking maverick intent and their natural gift for great pop. A battle that continues on their new album as Marc Burrows from the band The Men That Will Not Be Blamed For Nothing eloquently points out in this in depth unpacking of the album…

The title of the Manic Street Preachers 13th album, Resistance Is Futile, is misleading on first glance. It feels a little Manics-by-numbers, an attempt to invoke the bullish “we’re the only thing left to believe in” invincibility of their new-millenium hit Masses Against The Classes, or the bratty us-against-the-world v-flicking of their earliest work. You can accept that attitude from 20-year-olds demanding your attention or 30-year-olds reclaiming their territory – it’s less credible from three men teetering on the edge of their 50s. They’ve conquered already; their territory is marked. The only thing offering resistance to the Manics of 2018 is the Radio One playlist. Fortunately Nicky Wire is cannier than that, and digging into the meat of the record unlocks a far more melancholy slant on the phrase. Where their debut, 1992’s Generation Terrorists, began by telling the world “You need your stars” and inviting the listener to spread their legs and brace, Resistance Is Futile opens with an admission: “People get old”, sings James Dean Bradfield, “people get tired.”

This isn’t a band daring the world to just try and fucking resist them, this is a band admitting they cannot hold back the tide. The world has moved on, politics and technology have rushed past them. Resistance is futile. “I hate the world more than I hate myself”, admits Wire on Hold Me Like Heaven, one of the key tracks here. It’s heartbreaking to hear “tattered manifestos litter the mind” from a band whose manifestos have always been so focussed, so bulletproof. This is a hymn to helplessness – a terribly sad plea for some direction when “all the ties that bind will come undone”. It’s a sentiment echoed on the Bradfield-penned Distant Colours, where we get “let the banners unfold, let them fall to the floor”, and “I no longer know my left from my right”, ultimately asking “are we living in the past?”. If you were hoping the Manics would respond with renewed vigour and vitriol to a Britain of Brexit, austerity and in-fighting, or be galvanized by the emergence of youth protest movements and the reawakening of socialism at the top of the Labour party, you’re going to be pretty disappointed. On the closing The Left Behind Wire’s sighing, melancholy vocal nails helplessness in the wake of a world moved beyond his control, “I was a lonesome warrior” he sings “I was a willing conquistador, I believed in a higher truth… my fingernails are getting broken, my grip is getting loose”.

The good news is that all of this is handled beautifully. Those three songs in particularly are probably the best here, all top-draw Manic Street Preachers. Distant Colours has a tumbling sadness punctuated by bright stabs of synthesizer and one of Bradfield’s most aching and soulful vocals. Hold Me Like Heaven is lovely; a textured and gentle pop song that wears its regret lightly. If the lyrics suggest that Wire is resigned to being left behind, the music introduces a brightness and hope that maybe something is still worth believing in. The horizon is murky, but behind those clouds is sunshine and air and beauty.

If Resistance Is Futile is about accepting that the world has changed, it’s also about celebrating the things within it you’re still passionate about: music (The Eternal), art (Vivian), colour (International Blue), poetry (Dylan & Caitlin), pride and defiance (Liverpool Revisited). Wire devotes time to all of them. From the very start the Manic Manifesto, as outlined in Little Baby Nothing, was “culture, alienation, boredom and despair”. The band have done such a good job with the “alienation, boredom and despair” bit that you tend to forget that the list begins with “culture”. Not here. There’s a delicacy and depth to Wire’s portraits that highlight his gifts as a poet, all intertextual detail compacted into beautifully minimalistic phrasing, much as artist Yves Klein – the subject of International Blue – distilled his abilities into blocks of colour that fill you eyes with their simplicity. Dig in and there’s plenty to unpack.

Musically there’s plenty to enjoy too. Most Manic Street Preachers albums start by rejecting the last one: The metal excesses of 1993’s Gold Against The Soul begat the taught, intense Holy Bible the following year, which in turn led to the more impassioned and accessible Everything Must Go (1995). It’s a cycle that’s continued through three decades of their career. Resistance Is Futile is an oddity in the canon; for the first time in 25 years they’re not draining the bathwater or drowning the baby. Here the synthy, Eurocentric weirdness of their last record, 2014’s excellent Futurology, rubs shoulders with Postcards From a Young Man (2011) and Everything Must Go’s anthemic mass-appeal, creating a version of the band both familiarly Manic-ish and with an identity all of its own, cherry picking sounds from a career that has been way more sonically varied than they’re usually given credit for. Musically at least the Manics might finally be at peace with themselves, though if you’re feeling cynical maybe that’s just what happens when you do three anniversary reissues in the time it took to make your first three albums.

So we get International Blue with its classic “big” Manics sound, something to file alongside It’s Not War (Just The End of Love) and Your Love Alone is Not Enough, tipping its hat to Motorcycle Emptiness in its descending guitar licks, while resting on some queasy synths and a relentless electronic drum loop. When it first emerged on a grey December morning it felt out of place. Listening to it in the first sunshine of Spring under a real blue sky, it comes alive. Dylan & Caitlin nods to Bradfield’s love of Aftermath-era Rolling Stones. A duet with musical polymath (and frequently leopard-print-clad Manics fan) Catherine Anne Davies, aka The Anchoress, it winks knowingly at Elton John and Kiki Dee and there’s an easy charm to the way it swings. Davies’ voice is a comfortable fit, and her chemistry with Bradfield feels breezy and effortless. In Eternity pays tribute to Bowie both in it’s lyric (“the king and queen of style”) and in the Low-esque wobbling electronica, yet again there’s a freshness and momentum here that characterises Resistance Is Futile; its chorus feels unstoppably gleeful. In a world that’s moved so far away from the landscape they once knew there isn’t really anything left to do but indulge in melody and texture. You can hear it in Sequels of Forgotten War, a distant blood-relation of Generation Terrorists’ Condemned To Rock N Roll, with added care-free 70s swagger and proggy keyboard breakdowns, and Liverpool Revisited with its gorgeous, swaggering chord progression and spiraling guitar solo (courtesy of Nicky Wire).

There are a few missteps toward the end of the record, A Song For Sadness, despite a gloriously Manicsy title and a lovely, Stonesy string part slips by forgettably, underlined by its name-checking of a bunch of classic songs it stretches for but can’t really reach. Broken Algorithms is the kind of post-punk space filler the Manic Street Preachers can churn out in their sleep, with a textbook ‘grumpy Nicky’ tirade against technology and a doesn’t-quite-scan spelled-out-chorus. Thankfully Wire’s lovely The Left Behind, with its odd harpsichord chimes and dreamy melancholy is there to rescue side two.

There’s a real dichotomy to Resistance Is Futile. On the one hand it evokes a weariness and resignationg understandable in a band that has raged and wept for thirty years and 13 albums. People at 50 don’t care about the same things, in the same way, as they did at 20. That’s hard when you’re a band that made its name through bolshiness and passion, whose biggest hit was about working class literacy and whose first number one was about the Spanish Civil War. No wonder they’re tired of it. Being in the Manic Street Preachers sounds exhausting. On the other hand, this is an album that doubles down on the passion that’s still there – joy in the richness of the world and the inescapable thrill of melody. It’s a record pregnant with pessimism that is also irresistibly catchy and bright. The combination shouldn’t really work, but these are old hands and they know what they’re about. Ultimately it’s an album that sweeps you along, proving that – in both senses – resistance really is futile.