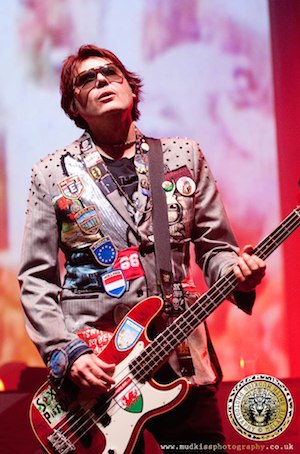 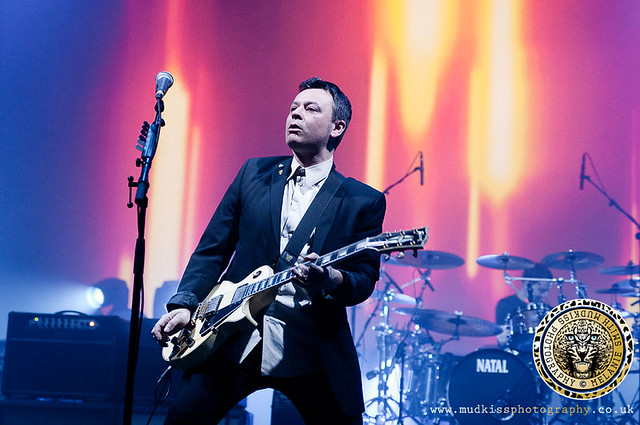 I sneak into a darkened Apollo as support band Wolf Alice release their final howl. Shame I didn’t catch more because they sound suitably psyched and punchy. The venue is packed to its ornate rafters tonight and the crowd seem like they’re all trying to steady their breathing, like they’re awaiting not just a stunning rock and roll spectacle but some kind of revolution.

The set kicks off with Show me the Wonder and as ever, James Dean Bradfield sets the pace with his remarkable ability to multi-task musically, choreographically and vocally. How the hell does he do it and never skip a beat?

The band’s Holy Bible album, which I believe to be one of the most harrowing, haunting and profound albums ever made, is now twenty years old and to commemorate this landmark, several of its tortured chapters emerge a little uncertainly in the set. I say uncertainly not because they were timid or shaky, not because don’t sound immensely powerful – but maybe because of how much they do. The band play Archives of Pain and Die in the Summertime (re-named Can’t Seem to Stay a Fixed Ideal by Nicky Wire) as though carefully handling dangerous explosives. They make it through these menacing, skin-crawling soundscapes and the Apollo is still standing but it does feel like something happened there….at the very least those dusty history books on the shelf of the big library in the sky shuddered and the dust dispersed through our dreams.

It’s not all about the Holy Bible tonight though. Despite the band’s illustrious past there is a renewed sense of engagement with the now and the future. New album Futureology sounds intriguingly exciting. We are treated to the title track along with Europa Geht Durch Mich – both of which sound and feel miles away from the nostalgic misty Welsh valleys that dominate current Rewind the Film album.

As is usually the case, the band play the majestically cathartic Everything Must Go somewhere mid-set and a couple of lines really jump out at me tonight “Freed from the memory/Escape from our history, history” What struck me is how absolutely colossal their history is – not just the disappearance of Richey Edwards and the impact that had on their trajectory but the way they carry this sense of purpose, responsibility even, for highlighting the battles of ordinary working class men and women, the underdog, the vulnerable, the disenfranchised. It’s a heavy load to bear but they do it with such an admirable passion and an endless search to find beauty within the desolation, to find hope among the tattered dreams. This is why they are such a special band and why I’m thrilled to hear them again tonight. Sometimes when it feels we’re drowning in a murky sea of apathy, spurts of optimism spring to the surface. The night before I watched another politicized and inspiring performance from Boy George at the Ritz. Tonight the Manics also deliver a resilient and heart-warming reason to keep believing whilst rocking the city of Manchester inside out, through the past and back to the future.