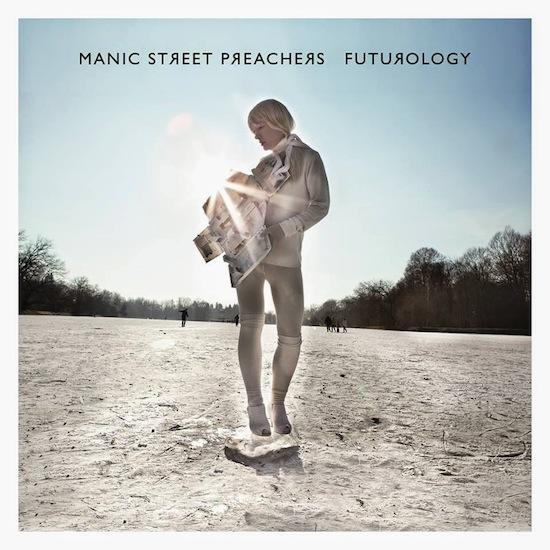 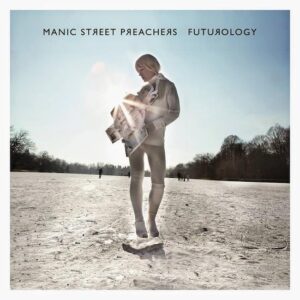 Europe is a tricky chap for most people on these islands.

On one level it’s fumbling tweed jackets like Nigel Farrage getting his stinking pub stained knickers in a twist ranting on about its evils or it’s studiously ignored by the music mainstream still sucking on the cock of the corporate American music machine. Of course the undergound have worshipped for years at its fantastic music from krautrock to the European ideal and when it has flavoured music from our windswept isles like Bowie in Berlin, the post punk generation, the eighties synth pop death to trad rock 12 bars it has been great – like an admission of our geographical heritage and a whole different way to be British without ever denying ourselves.

The Manics have always hinted at a European influence from the start- this was a band far too smart and international in its approach to be trapped in its, ahem, safe European home, on Futurology their quickly released companion album to Rewind The Film they have upped the ante and turned themselves into the musical antithisis of UKIP and created a very powerful document of Europa that is up there with their best albums with its fantastic scope of influences that they have chewed on and turned into their own with an album of emotional yet glacial pop perfection of new gold dreams and brilliant variations that still manages to bring the rock but paints it with a European twist.

Since then they have been working at the rock n roll coal seam, their changing lives reflected in their rock n roll but what makes Futurology so startling is that those hints of them escaping the Les Paul rush of rock have finally taken hold and they have created an album that glows with a future – a brave new world of Europa music- that brave new world from the 70s and 80s and battered old record collections re applied to the now.

But then that was always the charm of the Manics wasn’t it- their scrabbling at the locks of greatness and making it their own- you know, the way that Nicky Wire would list all his favourite current listening material and somehow get James to craft an album out of it with that weird cross cultural fertilisation of pure pop, underground weirdness and big rock. On Futurlogy they have crafted this into a bold pop perfection and into an album that breathes a power and inventiveness and is dripping with a European ideal- and the inflience of European musics from a continet that has so far ignored the band in mainstream terms.

Nicky Wire quotes David Bowie, Simple Minds, Public Image Ltd, Can, Popol Vuh, Cluster and Tangerine Dream, Stereolab and Kreidler in the press release and whilst their shadow is certainly cast over the album and the band went to the legendary Hansa studios in Berlin to record the record there is nothing to panic about for long term Manics fans- the albums still rocks but its cruising along an autobahn now.

The Manics slew of influences has always sounded like the best indie disco in town- the one that was full of hidden delights to dance to and you can just see James’s face when Nicky Wire enthuses over his latest latest flames to cram into their musical palette and its testament to James’s brilliant songwriting genius that he can make this all work.

Futurology is the Manics sounding defiantly pop and yet defiantly odd and that’s just the way we love them. A lot of people list this krauty stuff, this European ideal, this underground heaven but so few turn it into a pop music that rocks and that’s the band’s real genius. So few bands manage to sing about Russian futurist poet Maykosy on one song and then Edvard Munch on Between The Clock And The Bed sung by fellow Welshman man Green Gartside and of Malevich on Black Square and make it so toe tapping!

On ‘Dreaming A City (Hughesovka) they play an instrumental that sounds like the Stranglers when they went all weird or JJ Burnel’s fantastic and lost Euroman Cometh album jamming with the Simple Minds before they went all U2. They reference the tense Ukrainian city of Donetsk, whilst Sex, Power Love And Money recalls the Skids- the punk band who were the first onto this European tip way before everyone else and never got the credit for it  is also the Stones if they had taken their eye of America for one minute and comes with one of those huge choruses that are pure Manics.

Europa Geht Durch Mich (Europe Passes Through Me) is like the stomping neo glam take on the European dream- it’s like Bowie and Iggy sharing a flat in Berlin and comes with a German vocal from Nina Hoss and even some Neubaten metal percussion rattling away in the background. The View From Stow Hill casts a critical eye back at the removal of workers heritage from their nearby childhood city of Newport in Wales and reminds me of the Stow Hill Labour club where all those great punk rock shows used to be and that night when the cops came and busted a Membranes gig but that’s another story and another lifetime.

Me and the Manics go back a long way- right back to the beginning of scratchy demo cassettes and thrilling idealism and unpinned grenade idealism. They pretended at the time that they were in it for one album, the ultimate statement and then they would disappear in a blaze of smudged eyeliner glory but even at the time in those glorious interviews sat in the back of rusty tour vans or seedy hotel rooms or even with vodka sipping Richey weeks before he disappeared you could never quite believe these brave and bold statements.

They were just too damn musical to disappear and anyone who has ever been cursed by creativity would tell you that this is not a tap that can be turned don or off when you feel like it. Instead of making that one glorious statement they quickly found out that the long term is where it’s at. The Manics debut was a leopardskin thrill of Guns n Roses made sexy for a cult crowd who yearned for rock n roll that dealt with a slightly larger palate of topics than the usual grunt n grind. The Manics were like indie’s playful homemade situationists at those early gigs where a smattering of locals would freak and when they half made it it seemed more due not so much their own slash and burn but to the spend and work of their record label and it could be argued that the band were the last group to make it with the old school graft of endless touring, big record label promo push and a knack for great trad rock melodies.

They made the dark swerve with their album Holy Bible – Richey’s signing off note – a crumpled and impassioned affair full of the leaking darkness of Joy Division before they reconnected with the mainstream with Design For Life- the album where they came to terms with the dark stuff with songs that could fill stadiums- since then they have retreated and then reconnected from the white heat of being the band that matters- that high octane pressure of making every note and every statement throw righteous acid into the face of complacency. They have even tried to become a normal band- one that releases good solid records and tours the UK every couple of years but somehow their innate twisted brilliance combined with their big hearted decency leaks out either from Nicky Wire’s fab cross dressing or James’s last of the old school blue collar rockers with a heart on his sleeve R’n’R sweat.

There have been lots of albums that explore their darker side, they worked with Steve Albini to find their raw edge, there were the Gap Clothes album years, the comebacks, the pop flourishes and also the explosions in creativity but this is a late period peak- a twelth album that defies the usual creative hangover and is up there with their best albums. I can’t stop listening to it- it’s a great album of beauty and ambition.