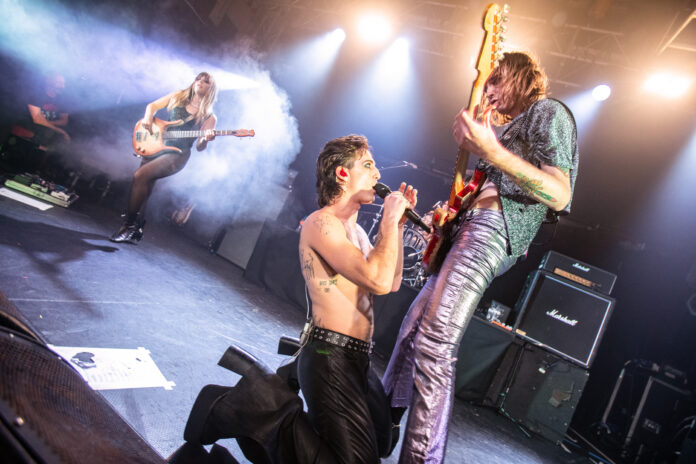 Italian rock band Måneskin arranged a surprise free live show for fans at 02 Academy Islington. Jasmine Hodge was there to feedback on the band who recently announced their ‘LOUD KIDS’ tour, which sold out in just 25 mins for the London show in February 2022.

I wonder how it feels to become the most desired man in Europe overnight. Damiano David, frontman of Måneskin would be able to answer that following their Eurovision performance earlier this year. With 800 sets of eyes firmly watching every move his statuesque figure makes as he throws himself around the room tonight, it’s no secret that each member of Italian sensations Måneskin are born to be on this stage.

Playing a secret gig at Islington’s 02 Academy, David emulates an Iggy Pop attitude to fronting a band. The rest of the group strike me as a ‘horny-Abba cover band’ and take glam-rock to a whole new level. As far as their tracks go, their songwriting isn’t much to write home about due to its repetitive nature, however, each cover they do tonight feels as if it was written for them to perform. Mashing up early 2000 favourites from Franz Ferdinand and The Killers along with their infamous ‘Beggin’’ cover, these songs feel as if they are truly theirs.

Obviously, Måneskin play that song which shot them to stardom in this year’s Eurovision contest, along with the TikTok phenomenon ‘I WANNA BE YOUR SLAVE’ which sees the crowd erupt into a loud chorus of support. The audience are mainly young and singing every Italian word as if it’s their native tongue- which is impressive. Turns out if you want to learn a new language, the best way to do it is to get four stunning humans dressed like Spinal Tap and you’ll pick it up in no time.

David’s Iggy Pop allure was confirmed when they crash into a cover of ‘I Wanna be Your Dog’ which would have definitely impressed the man himself. Throwing himself into the crowd and being carried along by a bunch of overwhelmed teens, the room is suddenly lit up by every phone wanting to capture the frontman in all his glory. Normally phones at gigs frustrate me, but any movement any member make is so artistic that every moment deserves to be captured.

With their reputation of fighting for LGBTQ+ rights and being a voice for these communities, the quartet continue that this evening by floundering around with a pride flag showing the world what they stand for. Their stage presence is filled with a flamboyant sex appeal, however, not a single moment feels seedy. With skin-tight leather trousers, hands down their pants, and fingers in their mouths, the night somehow feels PG for them and not a moment feels uncomfortable (despite their new video for ‘MAMMAMIA‘ showing the inner workings of Måneskin’s minds). They even pull up a handful of fans on stage to which I’ve never seen so many happy, comfortable people.

The group then leave before coming back on to play ‘I WANNA BE YOUR SLAVE’ again. Initially, an odd choice, but about 5 seconds in we realise what an amazing decision this was. The song has every person in the room moving for the second time and is the perfect bookend to a perfect night.