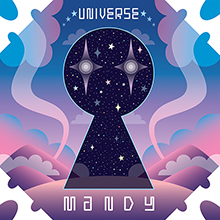 LTW have a listen to this fan-funded released psych folk final album by MANDY.

MANDY is the moniker of the well known and well loved members of the South Wales music and arts scene Mel and Andy Fung. ‘Universe’ was written and recorded in the lead up to Mel’s tragic and untimely passing from cancer in October 2014. This wonderful album marks her final profound and beautiful musical statement.

Both MANDY’s members pedigree in the Welsh music scene is well-established, performing with the likes of Derrero, Richard James (ex Gorky’s Zygotic Mynci), Pink Assassin, The MeMeMe’s, No Thee No Ess and many more. ‘Universe’ is a personal departure from these previous projects and demonstrates an even greater maturity and songwriting depth.

Opening track ‘Angela’ pretty much sets the scene for the rest of the album. It is tinged with folk, but has a big electric sound bolstering it. The dreamy poppyness is punctuated by complete psychedelic freak outs that initially jar, but after repeated listens make absolute sense. The dreamy pop continues with ‘Can you save me’, which on the face of it, could be throw away, but in the context of the lyrics “easy come, easy go”, it seems desperately sad and prescient.

‘For now’ is an absolute beauty of a track that is gorgeous and has beautiful harmonies and carry on the psychfolk feel. This album would be amazing to listen to, sitting outside a tent in the glorious sunshine with nothing but the sun on your back. And I have the feeling that MANDY may have had this in mind when recording this. ‘Alien Attack’ follows in a similar vein and reminds one of early Pink Floyd (‘Julia Dream’ and ‘Paintbox’ spring to mind) but then suddenly you realize Mel’s voice sometimes cracks like Kim Deals does, and then we are in Breeders country. Nice.

The album continues in this free-form, often psych, sometimes folk, sometime whatever (?), vein. And it is during the middle of the album that again the reminder of Mel’s life is brought sharply into view with ‘This is nothing’. The insistent and repetitive refrain of “no pleasure whatsoever, this is nothing” is incredibly powerful and emotive. Stunning work.

Final track ‘Seeing in the dark’ is the pinnacle of this album. Whether it is purposefully placed, means something else or is completely abstract. Who knows? But when Mel sings “small, smaller, smallest, then we’ll be gone” over and over, you get an overwhelming sense of compassion, grief, wonder and joy that this final album was finished.

Together, Mel and Andy as MANDY have produced a beautifully,meaningful body of work that will be shared, listened to and remembered for its musicianship and lyricism. If you ignore the sadness and finality to it, you can listen to this and hope for better things to come. Titling this piece of work ‘Universe’ just adds to its sense of joy, positivity and permanence that will stay with the listener for a while. This isn’t the end.

I will leave Mel’s close friend Mared Lenny say it better than anyone could: “The beautiful thing about music making is that it transcends mortality. It outlives us. And for someone with such a distinctive voice and spirit it’s comforting to know she’ll be on record for all time, forever immortal through her incredible creativity”