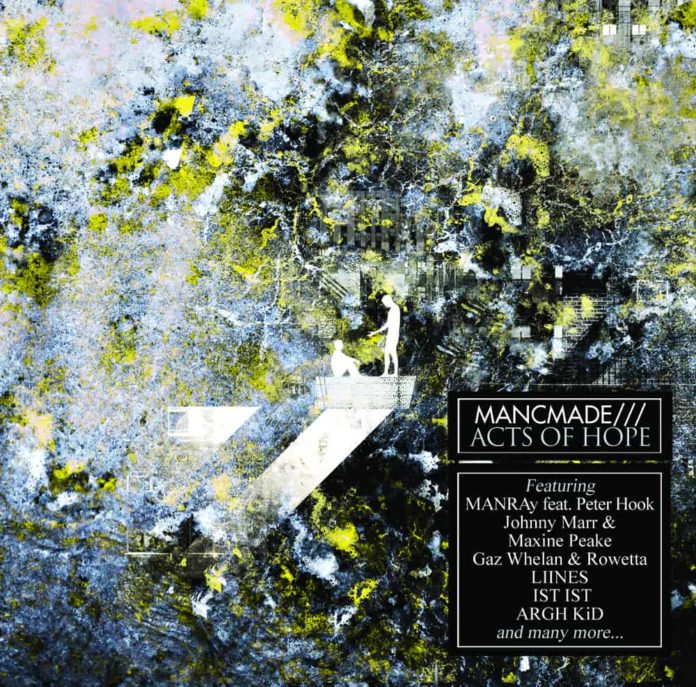 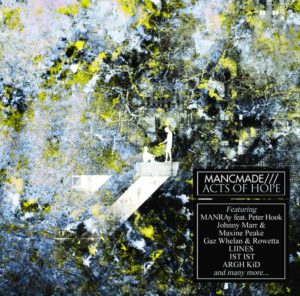 New Manchester label 42’s Records have pulled together some great acts for a compilation that can raise awareness and money for charity MancSpirit. 18 fine tracks featuring Manc legends and loads of up and coming acts that have graced our site recently. Wayne Carey tunes in…

MANC MADE /// ACTS OF HOPE is an 18 track compilation album created & curated by Ben Guy from the band Narcissus and brought to life by Manchester’s newest record label, 42’s Records, to raise funds for the charity MancSpirit in support of their Creative Change Homeless Project.

Having made a donation following an online appeal, Ben was left cogitating on what more could be done to help from within our city’s creative heart. His lightbulb moment was the idea to compile a fundraising album of tracks donated by some of the great and the good of Manchester’s music scene.

Whilst the primary objective was to raise funds, Ben was  determined that it should also be a cohesive body of work,   featuring a diverse array of talent, at all levels of the Manc music scene, from bona fide Legends through to new artists and including many genres.

Lots of Manc grit and graft later and thanks to support from a wide spectrum of 18 of the City’s musical and spoken word artists, from the highly influential and legendary, to the relatively unknown and up and coming, Bens vision has been realised.

Brimming with individual native and adopted Manc talent, the album comes packaged in beautifully fitting artwork,  designed by the 19th artist, local designer and photographer, Paul Evans AKA Painted Papillon Smile, referencing classic Mancunian imagery and reshaping it into an iconic package which unites the contents.

“THE MANCS HAVE PUT A MARKER DOWN”

Our City is the theme tune and closing track. Summing up the spirit of the project is the evocative Dave Viney & Narcissus collaboration Our City.

100% of sales proceeds from all CD’s downloads and merchandise will go straight to MancSpirit—Greater Manchester’s Mental Wellbeing Charity—to support their ‘Creative Change’ project.

Damian Carr, Co-founder of MancSpirit says “Everything we do is aimed at improving mental wellbeing by creating social connections, providing entertainment and offering people the opportunity to join in, make friends and have fun”

“Our Creative Change project started with us visiting people struggling with homelessness on the streets, in hostels and day centres, to listen to their needs for creative activity.  We create & facilitate that creative activity to help their mental wellbeing, help them re-engage with the amazing support services out there and, hopefully, help them off the streets and into their own home”.

“We value those people and organisations that share our vision of caring for others, helping those that help others, getting stuck in and getting things done. When Ben and 42’s Records offered to support our ‘Creative Change’ project it was exactly what we were about. Greater Manchester’s musicians, artists, writers & designers – Our Creative Community – stepping up, getting involved and taking positive action.

With the arrival of Covid-19 we soon realised that the project needed to be expanded to include other people who had become isolated, especially the elderly.

Every CD, T-shirt or poster you buy provides us with the funds to expand and develop this work across the whole of Our Greater Manchester”

Paul Ludden, MancMade®️ Founder, Co- founder of the MancSpirit charity says “The MancMade /// Acts of Hope Album has taken a huge effort from Ben Guy, (Narcissus) Phil Morris and Andy Wood (42’s Records). When Andy called me to say they’d like to support the charity by putting together an album we had a chat about the artists we could approach. From the start it was massively important to me that this album had a fair chunk of new, up and coming artists involved. The 18 tracks they’ve come up with absolutely backs that up and they’ve even managed to get a few Manchester legends involved too.

Our City, by Dave Viney, is especially poignant for both me and Damian. It’s been the unofficial anthem for the MancSpirit Charity since day one. Hearing Dave’s beautiful words now backed up by an amazing Narcissus track sums up everything about this album and everyone who has helped to bring it to life”.

This is a mixed bag of a compilation well worthy of anyone’s record collection. Kicking off with the wonderful Show Me The Truth a nice soul funk burner with Rowetta at her best vocally, it’s a smooth laid back summer haze of a track with nice touches from Gaz Whelan and Suga Mike.

Fellow writer Nigel Carr has been banging on about this lot from day one and it’s no surprise why. IST IST give us Exist, a brooding classic with undertones of Joy Division. A darker SRC destined for big things.

Jess Kemp is new to me. Her contribution Camden is a great pop folk number, really catchy and a proper ear worm. One of those songs that stay in your head for ages.

Narrow Margin are your classic Manc indie band. They have that massive sound that comes from Catfish & The Bottlemen, Courteeners and all the big popular indie bands that can fill stadiums. Expect these to be massive any time soon. On the same trajectory as Dirty Laces.

Jake Fletcher gives us No-one Talks, another indie track with vibes of Hall & Oates in there. Another new artist to me who sounds promising.

Johnny Marr needs no introduction. The Priest is amazing. Maxine Peake is the narrator on this spoken word piece of Smithsian sounding trip hop. Telling the tale of a homeless person trying to find food whilst avoiding the temptation of crack, smack, spice and booze which earns her the moniker of The Priest. Cracking stuff with that trademark guitar sound from the Marr.

UNE are fucking brilliant yet I still can’t decide whether Mark Radcliffe is taking the piss! Itksuarpok is a techno house banger with hilarious lyrics lots of voice effects. “Is anybody listening? Does anybody care?” “I’m hot and bothered, a basketcase, the beads of sweat running down my face” Sounds like he was in the Hac a few times in his youth!

LTW favourites Deja Vega give us Sleep, the B side to the excellent Eyes Of Steel. Fans of DV will know this one by now. A proper post punk psych number from the Winsford lads who are probably the best live band around. Fuck this lockdown…

James Holt is another LTW favourite. He’s a brilliant songwriter who just gets better all the time. Wanderlust is a dreamy folk number that has a summery feeling throughout. The way he changes tempo is really skillful and he’s got all the hallmarks of Stephen Fretwell, Liam Frost and Johnny Bramwell. A true talent who deserves to be massive.

LIINES released one of the albums of the year in 2019 and Never Wanted This was a standout. A tribal slab of post punk from the duo who mean it. Dark and moody yet engaging throughout.

MANRAy are another new discovery for me. 302: Come The Revolution – Thieves Will Die features Peter Hook and is a laid back pyschedelic trip hop summer number. A proper spliff tune to chill out to.

One of the best songs around at the moment is Wolves by Brix & The Extricated. It’s just perfect. The powerhouse of the Hanley brothers, Start’s amazing guitars and Brix with her sultry Blondie-esque vocals. The production is second to none and the chorus is just spine tingling shit. Amazing.

Factory Acts are another band new to me and they totally impress. Car Crash has got an industrial goth feel to it yet is an upbeat tune that drags you in with the honey coated vocals and vibes. Great track.

Space Monkeys were Manc faves back in the nineties and have made a welcome return. This is for fans of Oasis, The Kinks, you get this gist. A nice sixties feel with a great indie groove for the baggy nostalgia heads.

Closing track Our City is a nostalgic and poignant nod to being a Mancunian. Dave Viney narrates and gives us a look back at our musical history and the choons. He gives a big up to the NHS “But Manchester knows angels wear nurse uniforms and scrubs”, he quotes Ian Brown and the great Anthony H Wilson, all backed by Narcissus who totally surprise me with this. There’s loads of effects going on like 808 State samples and the tune itself is a chilled out house number that reminds me of Yes Please era Mondays. A stunning end to a great compilation. Check out the brilliant video below featuring Maxine Peake.

Respect to Ben Guy from Narcissus for pulling this together and to everyone involved in creating this great project.