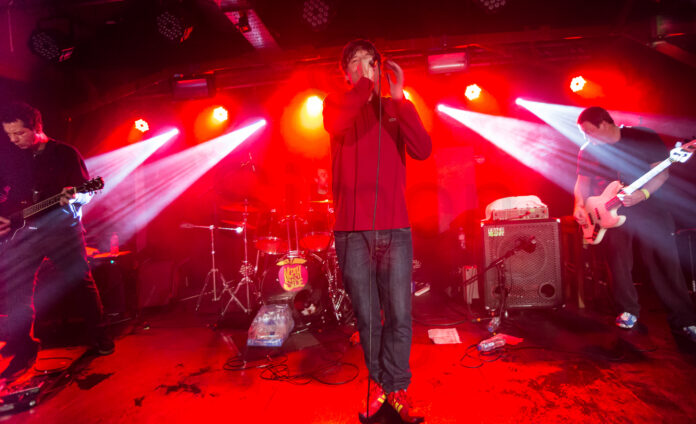 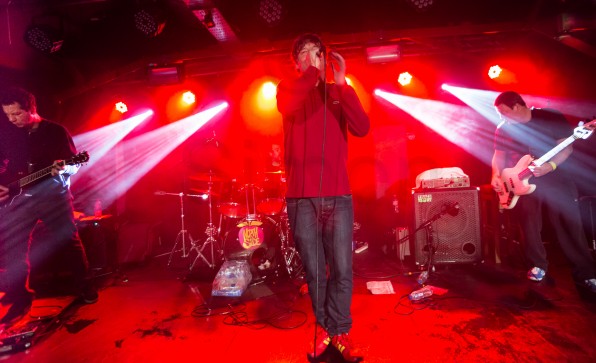 On 29 January one of Manchester’s favourite venues celebrated it’s fifth Birthday in grand style with a night many will never forget … but we start our this report with some words by Ben, Sound Control’s manager, for an exclusive insight into the world of Sound Control…

“When the idea behind Sound Control was conceived back in 2009, there were no other three-floor music venues in the city centre. We are in a great situation where we can host up and coming acts as well as well established artists.

“We’ve been lucky to host such a range of events over the last five years, from gigs and club nights to vintage fairs and film premiere’s, and all day festivals to BBQ parties. We see such a broad range of people coming through our doors and work hard to keep things fresh and diverse.

“Winning the Breakspoll award for Best Small Breaks Club Event In The World, for Lowdown, for three years in a row now has been an absolute highlight, and we are really proud to be hosting this year’s awards in March – a great chance to show the rest of the UK breaks community what Manchester has to offer.

“We are so proud that Lowdown also won the City Life award for Best Club Night – the night’s has been running since Sound Control opened it’s doors and has brought some of the best crowds to the venue over the years. We are so happy to be recognized in the competitive Manchester club scene.”

Of the future Ben had to say…

“We’re so excited for 2015 – plans are underway to expand the venue and make it possible for us to host two gigs a night on a regular basis, and we will be regularly hosting club nights six days a week from Monday to Saturday. We will also be putting on events at various venues around Manchester under the Sound Control name – this is a great chance to expand our brand.

At the beginning of 2015 we launched our newest venture, Acoustica at Apotheca in the Northern Quarter. The night showcases the best of Manchester’s local acoustic talent.”

Thanks Ben, we wish Sound Control good luck for the future and no doubt will be paying you many a visit.

On to the event itself… 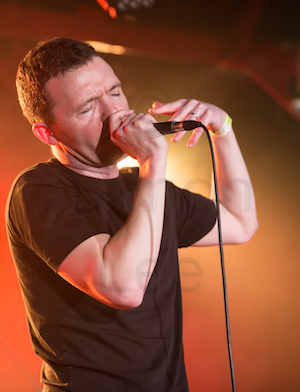 Cold, wet, Thursday and fucking thunder snow. Not feeling like a night out but It’s been 24 years since I last caught Northside live and it’s the fifth birthday of Sound Control so not even the prospect of work tomorrow can deter me or those shuffling into the venue for a good night out. As I make my way upstairs the few bodies in the room are enjoying Jordan Allen, the first of the night’s acts and an unknown to me but after tonight I’m wanting more and will be on the lookout for more of him and his band as the year progresses. Check them out for yourself as they deserve to be heard.

The Slow Readers Club (see photo, right) are well known in Manchester and have played many local venues. Although well-established and I’ve heard of them I’m not familiar with their music, so tonight is my first taste of their sound with plenty of their own following here showing their appreciation. A blinding set proceeds and though only short it’s seamless with each song tight and beautifully delivered to all present. The night is young but Sound Control have already delivered two very different acts of class that shows their finger is very much on the pulse.

Taking five I exit and nip back downstairs and see it is filling up nicely and soon the stairs that lead back to the stage that Northside will play tonight are all full of people heading up to catch them. There are all ages present which goes to show that they’ve made their mark and cemented their music down through the ages to the present crowd of today. I witness a lot of familiar faces from seeing Northside first time around and many more who are connected with the band either through friendship or music. Plenty of smiling faces and catching up going on all around the floor, it’s a good vibe.

Tonight is one of the first times in recent history that former Factory Records stars have played together in their seminal line up of Tim Walsh (guitar), Cliff Ogier (bass), Paul Walsh (drums) and fronted by Warren ‘Dermo’ Dermody (vocals and tambourine – see photo below.) 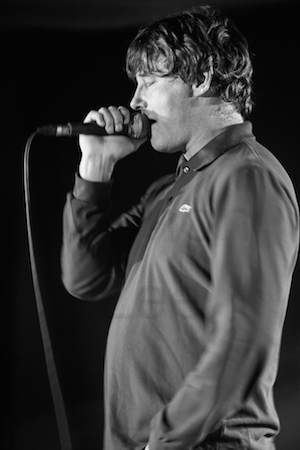 The band arrive to a full floor and are straight into it as if they’ve never been away with album track Practice Makes Perfect which judging by the performance we witness tonight shows a very different and accomplished Northside than the one of twenty something years ago, quickly followed by Funky Munky and I’m grinning like I’m 18 again as I witness the screens either side of the stage running gig footage of the band back in the day. At the end Dermo announces “Some things last forever!” he’s right and I’m thinking thank God they do. He continues, “Cotton is dead, Manchester is still weaving!” “Too many serious faces”, “When was the last time you had a good time?” “They know you know”,”For Tony!” the audience applause and its slowly drowned out by the opening of A Change Is On Its Way, as fitting tribute as a can be bestowed upon his memory as he always sought to and did change and show the face of Manchester for all to envy.

Rising Star (with impromptu stage invasion) “Sweet an that!” smiles Dermo. The arrival of the Holy Trinity seems fitting after a tribute to the Manchester Messiah and it is followed by Moody Places which Dermo informs us, “ Youth n a area, no such thing as a B side!” Often mistaken as a B side It was in fact a double AA side and one I recall having on my Sony Walkman with my hood up when I moved from Hulme up to Blackley, it’s a fitting soundtrack to that area of Manchester and was written in the same tower block I lived in, still relevant now. Debut single Shall We Take A Trip with its well known bass intro fuels the crowd with energy and cameras and phones are lifted upon high. I bet none of it is worth watching tomorrow as the crowd are rocking every way known to man but they’ll have the audio, however the memory is always better.

Everything’s a bit of a blur, too many flashbacks for us, and I know I’ve heard Take Five but I’m not sure was that from 1990? I feel like I’ve been hit by a truck, I’m confused, delirious, happy and not really sure of this set list or order it’s delivered in. But that’s the whole point of a gig isn’t it? That’s what every band and performer wants from an audience, to capture and move them, create and eventually invoke memories.

Jordan Allen can be found on Facebookand twitter as @jord_allen.