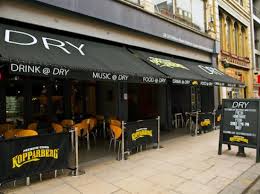 Another northern institution manchester’s Dry Bar has come to the end of its time. The bar that was opened back in the Madchester days by Tony Wilson and Factory records and even had its own Factory label number – 201 – in the then pretty desolate Northern Quarter was, like it sibling, the Hacienda a symbol of new Manchester . It was frequented by bands and scenesters but in recent years has turned into being just another of the many city centre bars that it ironically inspired.

Ina sign of the times Dry Bar has now been sold with planning permission for a boutique hotel causing worry on the local music scene about another institution, Night and Day which sit next door and whether a boutique hotel will allow a music venue to exist inches away. So far the city centre flux has been ok in manchester with the city centre venues thriving and far more city venues than any other city in the country and far more than when Dry Bar itself opened. The council has been proactive in this area and this could be a real test.

The listing with Christie and Co is now marked as sold, but the agent has declined to reveal details of the buyer and their plans for the premises at this stage.

The freehold includes the ground floor bar, basement cocktail joint Blue Brick Club and consent to convert the two floors above the bar and the attic space into a 69-bedroom hotel.