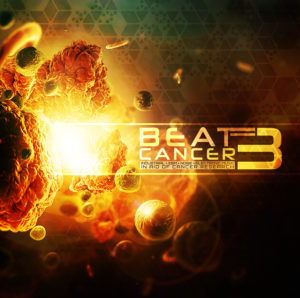 Friday 25th March is the official launch of Beat:Cancer v3, a compilation crammed with new artists and exclusive tracks from the alternate and electronic music scene – released on AnalogueTrash and in support of a very worthy cause. This Manchester label brings new artists, as well as new ways of making money for charity, to the fore. Industrial, EBM and Noise are presented as a powerful force and when the orientation is fighting cancer, even better.

Beat:Cancer is an organisation which contributes towards cancer research through the form of electro, awesome club nights and gigs –the launch event itself is the much-anticipated Resistanz Festival in Sheffield! It connects contemporary music with a critical reality which affects so many people’s lives; after all Beat:Cancer was started by Mark Haigh in 2012 following the death of a friend to lymphoma. He planned an EP to raise funding for research into the illness, a concept which quickly became a wave of support – fuelling two precious fundraising CD’s and raising over £6000 for Cancer Research UK in the past 3 years.

Now the forces of Beat:Cancer and AnalogueTrash have combined to bring you a collection of exclusive material, which contains some awesome electronica and bass-busting beats. It is two fingers in the face of cancer all right, and full of energy. There are club classics such as tracks like ‘Disorder’ from the city’s own Syd.31 as well as a number of cutting-edge sounds from previously unheard new artists. With names as interesting as ‘Beinaheleidenschaftsgegenstand’ and ‘Big Fucking Robots’ prepare yourself for one of the best blends of tunes for charity; with Beat:Cancer already recognised for its great compilations. When it came to v3 I wasn’t disappointed.

There are 36 tracks in total, but picking out sounds which stand out still is possible: the marker of a good compilation album which offers plenty of interest. Sleepless Droids start us off with ‘All Exits Are Open’ , the light verse of poppy pulses breaking into ripping warped vocals and a track which provides variations in intensity. This is electronic music with attitude. Similarly poppy yet wickedly provocative – two factors which blend themselves well on the album – is AtomZero with the track ‘Helix’. A digitally-driven male vocal builds atmosphere with repeated interrogatives rhyming off ‘who’s to blame and ‘just the same’. Opening up to bubbling sounds about subjects of ‘helix’ and ‘genes’ shoes how electronica can be used to engage interest; something very important considering the charity cause. It’s also much more catchy than you may first think and questions the nature of music itself through its own lyrics, as ‘sounds stuck together and arranged in a pattern.’

Music is shown to be barrier pushing, at times even challenging. One of the most interesting sounding group names has to be ‘Flesh Eating Foundation’ with ‘Scumbags and Spent Slags’. This is great dirty electronica, angsty in sound with angry personal vocals: ‘I’ll force feed you’. This is music which is so important because it is challenging, just like the objective is to really challenge cancer.

Fighting the disease can be carried out collectively too, no need to be alone – another point this album raises. This can be heard through collaborative efforts between artists, for example the colourful combination of – SOTUI feat. PsyJotics, Burnn-O and Siassh for MINIMO (Original Mix). It’s a great tune which seems to tell us of the heights that coming together can allow us to reach, featuring a growing crescendo like a rocket readying for flight. This is the type of track to completely tip a club atmosphere over the edge into the wildest dancing and seems to stop as suddenly as it starts.

There are contrasts in genre too, it isn’t just big beat club anthems. The following track from Project 2501 –‘Reprogrammed XP’ – provides an electric guitar and drum-driven piece, growing faster and more electronic fuelled, a trip in itself. Collaborations and genre mash ups are surely what a compilation is all about and this track reaches anthemic elements through its accelerating rhythms , clearly celebrating something.

What could be celebrated is music’s ability to explore and Cease2Xist is one example of an artist who aims to go far in this way. His track ‘This is My Design’ (Crowns of Bone Remix) remains distinct as is a creepy listen, echoing and squelching on opening accompanied by a war-like drone until the drums drive in. I’m sure I can hear a siren in the background too. Combining unnerving noises of the everyday with the electric is what Dave Yates AKA Ceasase2Exist does well, through solo effort. Based in Shrewsbury and having already released a number of EPs including ‘My Remixed Rage’ with another due to this year, this emphasizes that the content of the compilation is at the cutting-edge of modern music.

There is instrumental diversity amongst the array too, it’s certainly not all bass. The funky Fascination Street (Original Mix) from Neonsol contains some classic keyboard sound whilst Cloudspires with Guardians of Time (Original Mix) provide a tolling bell and a raving ‘chopsticks’ rhythm, which breaks into later sounds of flutes/pan pipes. It contains artists who are clearly passionate about using a variety of instruments to entertain the people. Take ‘Spawn Of Psychosis’, for example, mixing electronic drums and synth with thrashing guitar, blistering bass all complete with angry vocals. Yet it was their track featured on the album I was particularly impressed by, as towards the end of the compilation it seems to provide a chilled, beach-inspired sound; mixing drum rhythms with some softer intervals.

It is this variation of intensity amongst the tracks and easing the end of the album into a more reflective tone which lends it great emotive power. The music is fun all right, but doesn’t forget the cause – and as part of that leads us through a soundscape which can be dark as well as dance-driven…

The electronica side closes with a bold female-fronted act Jet Noir with Till the Bitter End (Jeremiah Saint Maxi Mix), catchy sublime-style beats followed by distorted vocals, with haunting harmonies to finish. It adds a distinctness which made me think – I would have liked to have heard a few more female-driven tracks on the album; as many pieces contain a generic male-styled vocal, even if robotic. But that isn’t a criticism of the sound of this compilation, which keeps you entertained throughout. From dirty to dreamy, rapid to restrained, what matters is that every track has character. It can be easy for electronic and club collections especially to have tracks that blend with each other into a kind of boredom, but that is certainly not the case here. This is real character standing up to cancer. And you can too.

For more information on Beat:Cancer and v3 you can visit the page here, and also the AnalogueTrash website.