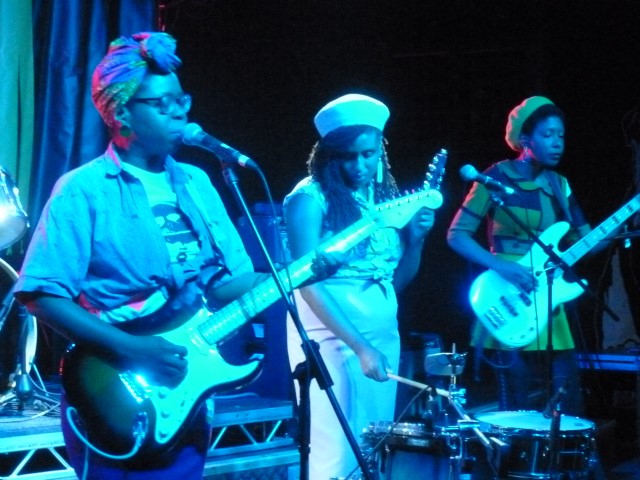 The Manchester Punk Festival has grown to the point of needing bigger venues for over 130 bands who come from around the world to do their thing. This makes the amount of attention to detail and information you receive before putting a toe outside Piccadilly Station even more impressive; something which comes from genuine enthusiasm and a cooperative spirit which puts some festivals with big money backers in the shade. So why a feeling of trepidation before this gathering of the clans? Perhaps because the bands that are deemed as punk might add up to something less diverse and challenging than back in whatever day it is I remember. Time to get over it.

Jesus that’s some wakeup call you’ve got there Burning Flag. Its 2pm and the wall stripper intensity of their 80s UK-punk-meets the weirder end of the US scene of the time is well and truly detonated. The more they let the latter off the leash and Md’s vocals do the talking as she “can’t be arsed to talk” the better – a brooding corner of Yorkshire which seems to suit the frayed edges of the crowd and the ‘shithole’ of This Town to the ground. 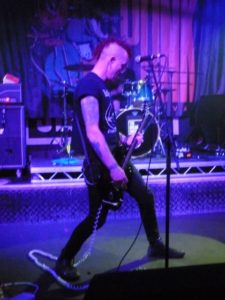 Guitarist Jonesy, neither looks or sounds like Steve on the maelstrom he unleashes. His fuck you to Tommy Robinson before the title track of 2017’s Izabel and its evocation of Auschwitz a warning from history that has never sounded more tragically potent. If Burning Flag bring the Hell and Halifax to Hull, Hell and Halifax then I can do the rest. 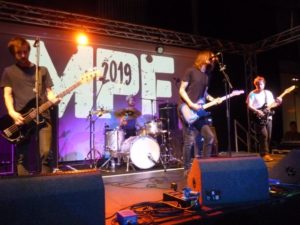 Astpai are a seriously committed proposition from Austria who have worked their way outwards to play over 25 countries in a decade. Opening up at the Union with Best Years from their last album True Capacity, it is immediately apparent how pleased they are to be here. The melody-soaked likes of Feel Your Pain hitting home the hardest and the thousands of gigs all the more impressive as singer Zock is diagnosed with Crohn’s Disease. Kickin’ Crohn’s and Colitis’ ass is a cause close to mine and the joyful two fingers to embarrassment of 2000 Pills always cheers me up. So if Brexit means one missed prescription, get ready for the mother of dirty protests. 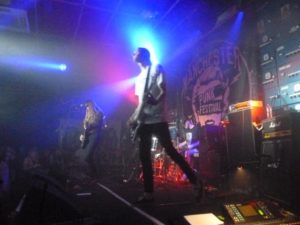 Straight after this it’s a sprint to a packed Gorilla for the Muncie Girls. Discovering the band had done the same after a breakdown in their new car brings another kind of empathy. When we get going Picture of Health arrives in mid-Atlantic between C86 indie and American college rock in refreshing style. Vocalist Lande started the excellently-named School Of Frock to help get more women into guitar music, and Locked Up with its “We’ve got the cell and we’ve got the key” seems like that personified. A slower-paced but no less tuneful challenge is directed at Clarkson on the eponymous Jeremy, which maybe needs a remix as things have shifted so far he is a bog standard remainer now.

The previous day I had been looking forward to the three quarters of the glass half full defiance of Bear Trade that has become the aptly named Misfortune Cookie, but arrive at the Zombie Shack to disappointment as one of them has broken something and has had to cancel. Consequently, in order to keep my quotient of mad Mackem up it’s over to the Brickhouse Social acoustic stage for Frankie Stubbs. Now I was a fan of Leatherface and their Husker Du-meets- Motorhead in a blender majesty – so much so that I was called Leatherface Steve as a way of distinguishing me from all the other Steves. Either that or a comment on my youthful acne.

All of which has led me to watching a bloke with a beard on the acoustic stage who is even older than me and having to pretend I have something in my eye during set opener Springtime. It would be easy to blame it on the hangover, but lines like “Your fascination for larger than life, your brand new appetite, as though we’d invented it” make a messy hypocrite out of this confirmed stool rock hater. It was actually a plastic garden chair and as Frankie’s red wine went down spirits lifted. This run-through of classics from Discipline to a hearty sing a long of Dead Industrial Atmosphere proves good value, even through the phone screen of two people live streaming it to their internet following at home. 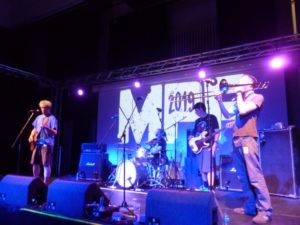 Having being told there are no guilty pleasures anymore I have decided to have one and if that isn’t punk fuckin’ rock I don’t know what is. Tonight that is Snuffwho have been demonstrating the difference between punk pop and pop punk for some time. They can do their own type of passion with the likes of Keep The Beat but also know how to pick a cover. Managing to imbue the plaintive Whatever Happened To The Likely Lads with a sense of release as a riotous opening version kick starts crowd participation in a big way.

Duncan on drums and vocals still manages to pull off the sort of barrow boy charm that perfectly complements the trombone parping madness that is going on around him. Even better, the new ones reaffirm a knack for more songs so celebratory that clever people won’t ever get it. On the shit eating grin numbers, it is quite simply like having distilled toddler pumped into your dancing shoes on a weekend bender. Some of which is almost certainly frowned upon.

Just like the slapstick punk family tree that goes back through the likes of the Toy Dolls and whisper it quietly the Dickies, earlier on in the 800 capacity Union venue Goober Patrol came to us live from Norwich as bassist Tommy concentrated on the day job after a stint with the Dolls. The last time I saw them in 1990, they were playing with a band called Vehicle Derek and the members outnumbered the audience. Judging by this turn out, their brand of sarcy scuzz has collected a steady dozen recruits a year and would inevitably end in world domination if we had time. In the here and now, B.E.E.R. sounds like Chas and Dave on the sort of speed which means you can carry on drinking for longer while Easy Life shows the benefits of one with a kind of multi lingual Tommy addressing friends he has made along the way.

It was a couple of hours into the Festival when one of the most vital bands took to the Bread Shed Stage. Big Joanie are good because they’re good, but being black women informs the band aesthetic without much overt placard waving. They do however set their stall out immediately with opener Token. A burst of almost rock n roll guitar giving way to a rhythmic shift and a vocal interplay which reflects on white people with a novelty black friend but could just as easily extend to bands. From Poly Styrene to the Bad Brains or even Death, if you want to go right back punk has got black past but it should be more the merrier rather than the odd example who don’t get their dues until years after.

The single Fall Asleep, a tuneful tour de force, reinforces the impression of song writing which has benefitted from time to develop. If this has the confidence to push at the punk rock envelope, then How Could You Love Me takes a letter opener to the jugular of an abusive man – showcasing their DIY Wall of Sound to maximum effect and walking off with a chart-botherer of the weekend in the parallel universe between my ears.

To illustrate the range of a festival which seemed to run like clockwork, dishonourable mentions go to comedian Will Hodgson and his funny as punk rock comedy, despite him not looking like Pat Butcher anymore having meant I walked behind him around Manchester without knowing. And last but not least at least some of the upstarts from Incisions who delivered a set of Minor Threat numbers which went on into Monday morning – the drunken version of Straight Edge a particularly sacrilegious delight. 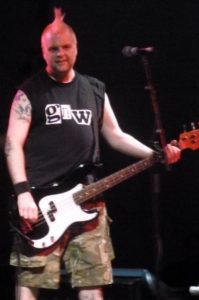 It’s not all lager down your trousers though. The Goober Patrol song That’s The Point reflects on punk having lost the shock value but gained a community feel. That, readers, is what I will be taking away in my metaphorical St Pauli tote bag. Sometimes it can seem a little safe but in a world gone mad this is understandable and mavericks don’t join clubs anyway. Or maybe one false move on the sun-baked streets of Manchester and I missed the glamour and the noise of an existential spouting nonsense band. Either way, that people from 23 countries have attended is a statement in itself way more important than the heritage punk industry that dominates the mainstream media discourse and has spent longer talking about 1976 than the year took. Leaving the twentieth century, I have the feeling punk is in good if not necessarily ruder health.

All words by Steve John. You can find more of Steve’s writing for Louder Than War here.