Home Blogs Manchester ninjas go to the World Cup, but to watch more than... 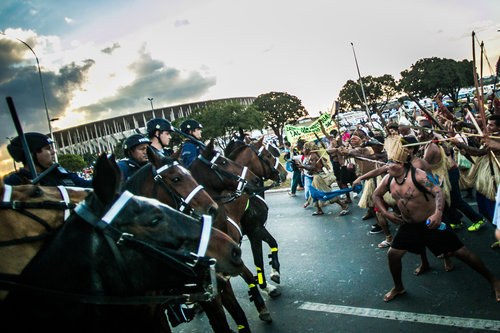 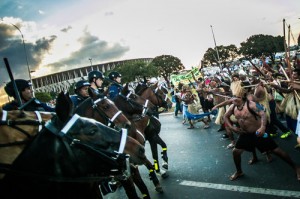 Manchester ninjas go to the World Cup, but to watch more than football…

Manchester based organisations In Place of War and AGENCIA are in Brazil during the World Cup, but to watch more than football. Manchester based music and cultural pioneer, Ruth Daniel and fellow cultural producer and activist, Lucy Wallace just landed in Brazil after being invited here in December 2013 by native Amazonian Indians. They are there as the European Midia Ninjas – citizen journalists, helping report on the revolutionary activity happening across Brazil on the newly launched Midi Ninja platform.

Following over 5 years of taking their Manchester born events to Brazil, they encountered revolutionary music organisation, Fora Do Eixo, based across 200 cities in Brazil. The collective of over 2,000 young people, had developed the infrastructure to mobilise over 33,000 bands per year across 6,000 events – all with their own economic model, bank and currency.

This collective has joined forces with many hundreds of collectives across Brazil – representing the poor, indigenous people facing issues with land rights, students, the homeless, and many more, to help build platforms, events and documentation around the inequalities facing the people of Brazil today. Whilst all eyes are on Brazil during the World Cup.

Following over a year of protests, Ruth and Lucy join the protesters on the streets in what is expected to be a time of unrest in Brazil. They are documenting what is happening with Brazil’s Midia Ninjas – a collective of citizen journalists, that become household names in 2013 due to their non-biased reporting of police intervention in the revolutions and protests across the country. Their innovative use of social media and other digital channels and technology enabled this group of young reporters the opportunity to become one of the biggest news channels in Brazil.

‘I was invited here during the world cup by an indigenous Indian when I visited Brasilia last year for the For a Do Eixo Congress. How could I refuse? I want to show solidarity to those indigenous tribes that face losing their land, their homes and their rights. This visit is very important – to help give a louder voice on important issues facing this country at a crucial time in Brazil. All eyes will be watching and because Brazilians recognise the power of working together – I expect some very spectacular interventions here.’

There have already been many protests involving over a million people across Brazil. Particularly powerful, was the protest by the Amazonian tribes in Brasilia last week. Fighting for the rights to their land heritage, the tribes took to the streets to celebrate their heritage. Intervention by the police as they got closer to the stadium, resulted in confrontation.

It’s a strange mood here in Brazil. Only now are people putting up their decorations, ready for the football, something that would have normally happened a month ago. The traditional spirit of fiesta is somewhat dampened by the massive inequalities that have been highlighted by the presence of the World Cup. Over fifteen billion dollars have been spent on the World Cup and many people think this could have been better used to counter the social injustice here in Brazil.

Kick of is Thursday. Brazil vs. Croatia. On that date we will join the crowds in Sao Paulo for something big. We know what is planned over the coming weeks and it forms an exciting and powerful programme of action across Brazil. A platform to highlight these issues to the world. We will be here to bring you the latest news and reports.

Ruth Daniel and Lucy Wallace will be the official European Ninjas during the World Cup. Follow their reporting here: https://www.midianinja.org.

In Place of War: www.inplaceofwar.net

By Ruth Daniel for Louder Than War