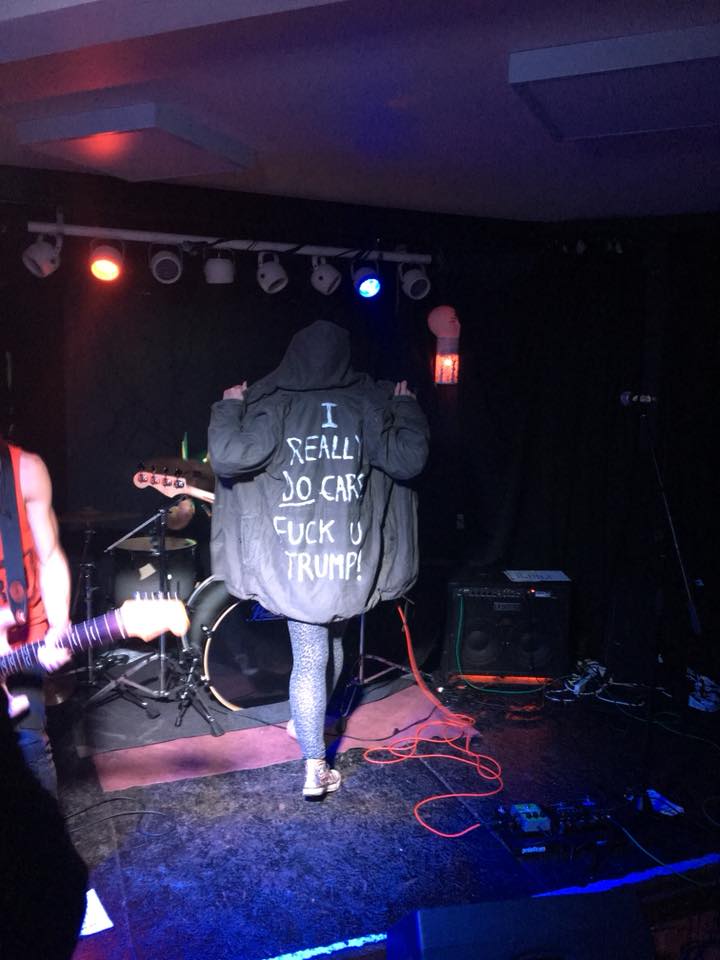 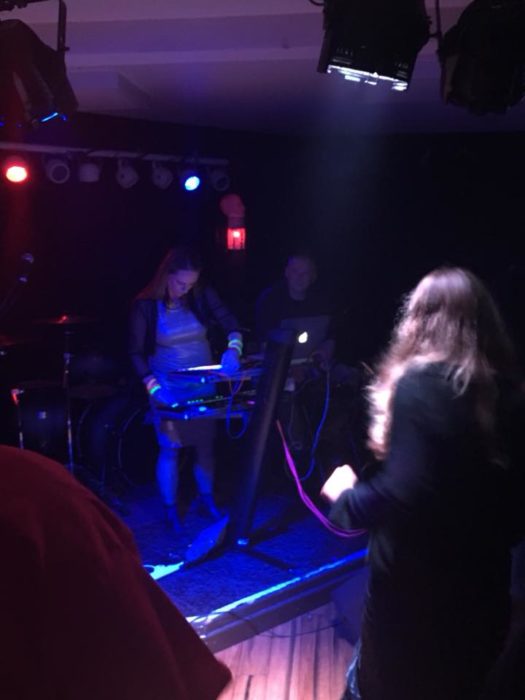 A spectacular of local unleashed creativity – hands down. More than 10 hours of music, an array of bands and a brilliant innovative streak had Manchester’s Northern Quarter venue The Peer Hat on fire for ‘The Manchester Meltdown Summer All Day special’ on 23rd June (2pm-midnight)– curated by Ian ‘Moet’ Moss and German Shepherd Records. Louder Than War’s Emily Oldfield went along to watch…

Forget inflated festival formats of cheap gimmicks, being drip-fed bands and people talking through the acts. ‘The Manchester Meltdown’ served up a refreshing antidote of delicious, daring music on the downstairs stage, filling the room with raw noise and power, shot through with a penchant for punk. It was an all-dayer of sound which didn’t just inspire energy, it created it. And inspiration in itself – the event raised £40 through the sale of badges, with the proceeds going to Mary’s Meals to help fight the food crisis in South Sudan.

And for an event which offered a selection of bands, a performance piece from S.O.S and Matt Davies of Salford-based duo Factory Acts, 50% of the Prick Jaggers and DJ sets from Stephen Doyle (also of Salford City Radio) – the audience were in for a treat.

Early in the day was a set from the energetic, evocative five-piece Monkeys In Love – melting together slick social commentary with an impassioned sludgy glamour, amplified with props and wild projection.

Flea were another early band not just to get under the skin, but to sink themselves right in, with gutsy Boardwalk-inspired grindcore from the self-described ‘micro-chip axe murderer’ duo Rat and Boz – bringing sizzling speed and beats thanks to Sissy the drum machine. This was particularly profound, as one of their only gigs of the year – and as keen gig go-goer Neil Winward reflected:
“All Flea’s set were from 1988-92. They were labelled a ‘grindcore’ ‘industrial’ band and they certainly showed that. Boz and Rat performed a set with vigour and skill, and showed they have not lost any of their excitement and hardness as a band. Headshrinker was a prime example.

“They will have the back catalogue released by GSR later this year with some new material. They played with a range of bands like the Ex and Nomeansno and the Slum Turkeys.”

Then it was shimmering tambourine meets spiralling vocals shot through with searing bolts of fuzzy, frenetic guitar, thanks to Diagonal Science. The enigmatic, enchanting voice of Whitney Bluzma billowed through the vocal range, topping the inviting, hip-shaking rhythms of the band – in a way that was instinctively energising. The instrumentation fused together to turn the room to dancing and swaying with its own kind of secretive voltage.

The audience were by this point, well turned on. But it didn’t stop there. The next step featured being turned up and invited into an experiential explosion of sonic power and exploration. The world premiere of ‘Are you the singer?’ from S.O.S of Factory Acts, with on-stage contributions from Matt Davies (also of Factory Acts) whilst featuring voice recordings from a range of female artists from all over the world including Whitney Bluzma herself, Una Baines, Stella Zine, CJ Coleman and a number more.

The aforementioned explorative quality was underlined in that this was a piece poised to inquire into themes of misogyny in music – the oft-asked question aimed at female artists, layered with assumptions: ‘Are you the singer?’. A mini-zine-like programme was designed to accompany the performance, showing the various responses to the question from the track’s contributors. All these insights, lines of reflection, were stunningly incorporated into the sound… as became increasingly evident.

Using these recorded insights rather than a live vocal, the performance powered on with the soundscape surging and building all the while, rising bolts of rhythm and body-beguiling beats searing through as hot and close as breath. ‘Are You the Singer?’ was an utterly incensing experience and something I was shouting at them to release as soon as my feet had stopped dancing. A real highlight. 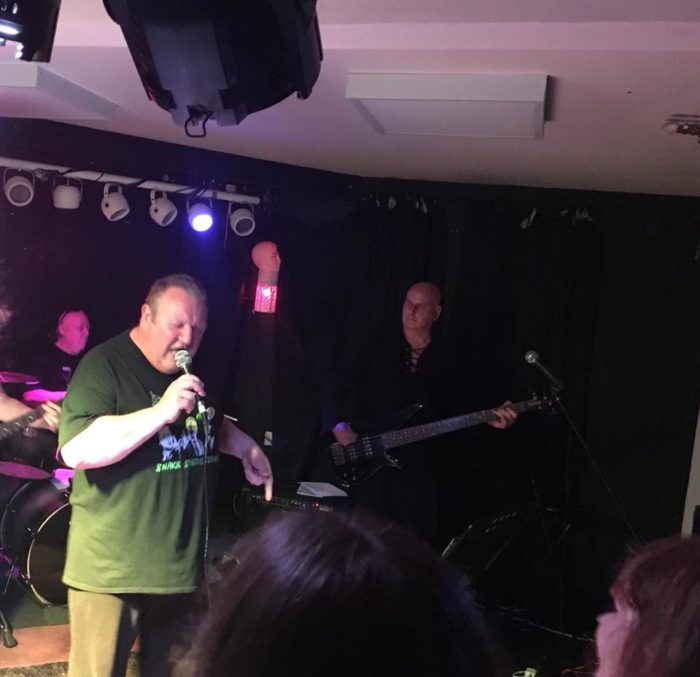 This was followed by another feast of sonic force, this time from Four Candles, a four-piece with Ian ‘Moet’ Moss on vocals, accompanied on the night by a ‘Fifth Candle’ – David Wilkinson on saxophone. The set opened with an amplified attack on abuse and abusers, the angry, acidic riffs of ‘Sex Toy’ as Moss spat the thundering chorus of ‘sex toy with a pulse’ out over and over. This was a forceful, frenzied treat of punkish power – as can also be heard on their latest ‘Spiritual Rapture’ LP – out now on German Shepherd Records. The profound sounds of ‘Chastity Belt’ and ‘You Can’t Be What You Pretend’ had the crowd bucking and thrashing, catapulted to new heights with the raw, raspy relish of sax searing through the mix. Wonderful.

Drink and Drive followed with their signature blend of searing, heavy bass and guitar turning the mundane aspects of life into attention-grabbing music – and then Bobbie Peru; a band plunging punk and post-punk influences together with rockabilly, for adrenaline-infused melodies, gripping the audience into movement.

The evening also featured The Empty Page, delivering their fist-pumping formula of grungy fuzz infused with Mancunian buzz – allowing for an anthemic element to emerge out of the choruses, to great effect for the point in the evening. Plus a particularly kick-ass coat. Last but certainly not least of the live acts were The Sandells, with a daring, krautrock-meets-punk finale. Thundering drums, blistering bass and wild washes of sound… underlining that this was a whole day of some of the city’s best experimental and intensely interesting acts – all on one basement stage. 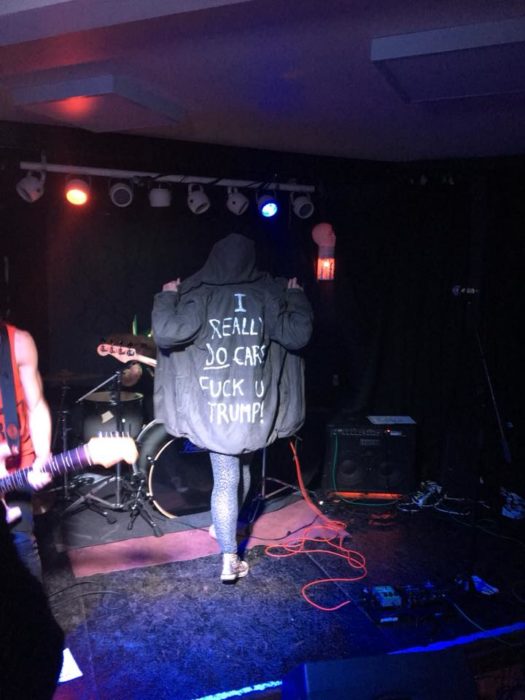 Topped off with DJ sets from Stephen Doyle, it was a ‘Meltdown’ of energy and drive to remember – and a fitting special from Ian Moet Moss’ Meltdown event series.

Photos – with thanks to Victoria Egan
By Emily Oldfield