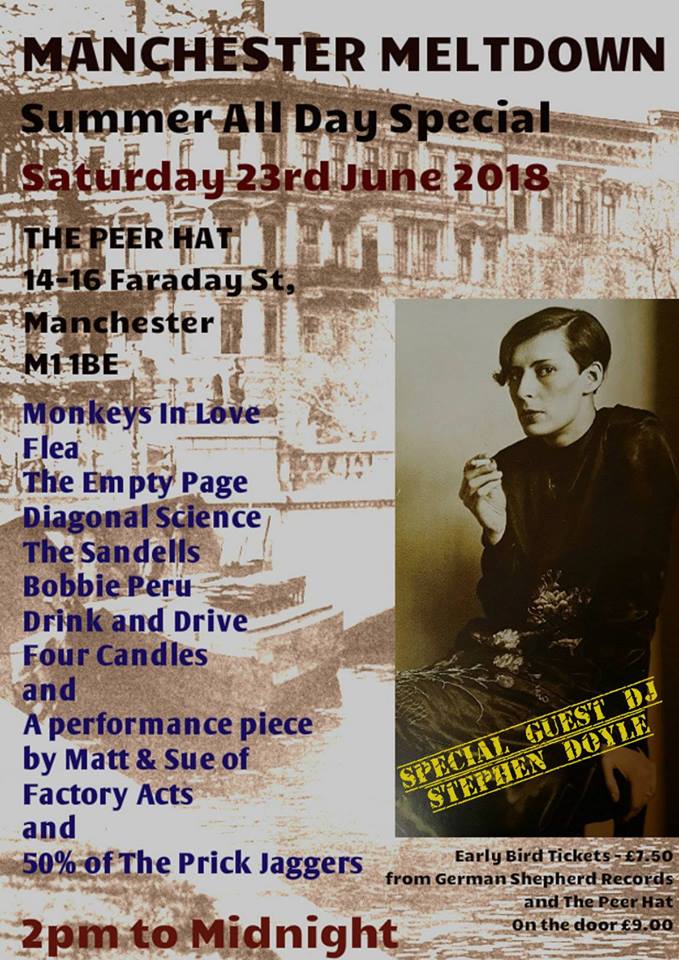 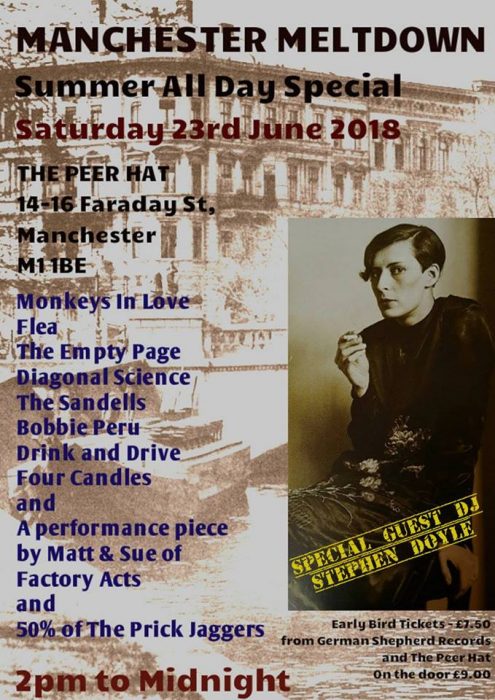 Ian Moss is a living legend/cult hero.  An Outsider Artist. A friend or acquaintance at some point of practically everyone who is anyone in punk, post-punk and experimental music in Salford, Manchester 1976-to date. Singer with the Hamsters, Four Candles and numerous bands inbetween. Co-founder of German Shepherd Records who put out his material and countless other bands. (I’ll be honest, he’s a mate, who I have met just once, when his band travelled 100’s of miles to play my 50th birthday party…)

On his Facebook page he regularly posts ‘On the Turntable today’ mini-essays or thoughts on whatever he is playing. He has hugely eclectic tastes and imparts a lot of wisdom… Because he and his compadres are putting on the Manchester Meltdown All Day Summer Spectacular on 23rd June at  The Peer Hat (14-16 Faraday Street, M1 1BE ) with a host of local talent, I asked if I could reproduce some of his postings, a/ because they’re great and b/ to promote the gig.  He say ‘yes’.

The accompanying videos make for a blinding playlist of old and new music from mavericks and geniuses.  Enjoy.

On the Turntable today #1
I am for better or worse very serious (many would say over serious) about music.  I listen to it nearly constantly and think about what makes some music good and some music bad.  My great friend Mr Doyle contends that it is all a matter of taste.  Reasonable enough… but I totally disagree. I think it is all about the intent of the creator.  I think it is about the purity of the vision, not just in music but in all art and if that purity is compromised in any way, from thought process to inception, it will be tainted and corrupt.  I love what I perceive as pure expression.  Where I find integrity I am drawn in.  The artist is communicating with me.  Where I find that lacking, in what I regard as bad music, I am abhorred by the dishonesty.  I go into a tailspin of revulsion and anger.  I have been physically sickened by certain records and the damage to my fragile emotional state is incalculable.  To counter these feelings I find the perfect antidote is… ( four singles by James Brown)

On the Turntable today #2
Not all great records are great songs.  A record can be great because of the performance that is captured or by dint of great arranging or production.  A record can be great by capturing a mood or feeling .  That said I love a great song and when a great song is served by excellent performances and caught on tape my heart does overflow….  ( Husker Du – Makes No Sense At All, David Bowie – Absolute Beginners, Vic Godard & Subway Sect- Stop that Girl,  Bob Dylan – Everything is Broken )

On the Turntable today #3
I’m always aware when I do these posts that it’s easy to slip into a self aggrandizing “Look what a cool kid I was” mode.  I do try not to.  I would always concede that while, yes, I was buying records by the likes of The Stooges, Faust and James Brown, I was also buying plenty of records like these too… and loving them !  ( Golden Earring ‘Radar Love’, singles by Free, Thin Lizzy and ELP)

On the Turntable today #4
Although the significance of the ‘Punk Rock’ years has been massively overplayed and it’s mythology is now often mistaken for fact (good music ended in 1969 until the Damned released New Rose in 1976 and nobody wrote about what was happening in the world….  What about Marvin Gayes What’s Going On? The Wailers? Hawkwinds Urban Guerilla? Kevin Coyne? … anyway) what it undoubtedly did though was give a chance for people who previously had no chance to express themselves through music, the floodgates opened and amongst the deluge of dross some diamonds did shine.  (Johnny Moped -Darling lets have another Baby, The Ruts – In a Rut…)

Magazine- Shot by Both Sides
The earliest escapee from the new orthodoxy Howard Devoto formed a prog band with attitude closer to Van der Graff Generator than the Drones or Slaughter and the Dogs, they were formidable and thrilling.

The Slits – In The Beginning… / the Pop Group – Where There’s a Will…
A double A side from like minded outfits who found a groove and distorted it along with the sound woven around it.  As George Clinton had put it “This is a chance to dance our way out of our constrictions”. This sounds as contemporary and vital today as it did then.

Mark Perry – I feel like the whole world is down on me
The new freedom had opened the door for Mark Perry. Here was a man as bright as a button, obsessed by music, who before 1976 would not have stood a chance of being taken seriously as a singer in a band.  He plainly couldn’t sing in a conventional way and yet for the material he wrote his voice was the perfect fit.  It added to the sense of emotional honesty in his songs.  He wasn’t afraid to rock the boat either and say unpopular things and test an audiences capacity to think beyond the ever narrowing confines of what constituted punk .  This 1980 single distanced him from the pack by being a quite delightful lovers rock style peon concerned with rejection.

Delta 5 – Try
Formed in Leeds alongside the Mekons and Gang of Four after seeing the first date of the Anarchy tour, all three bands seized on the potential to do something with the prevailing spirit of what they had witnessed.  What set them apart from many who did the same thing was they didn’t attempt to slavishly copy the look and sound but to do things there own way. For Delta 5 that meant playing infectious spidery funk with a distinct feminist edge and writing songs subtly expressive rather than shouting out a stream of cliches. It has meant their early singles, this one included, remain relevant and intriguing.

(Written for this Meltdown promo piece.)

In the post punk period between 1978 and 1980 music pushed in many directions, New ways of expression were explored  a language both musical and lyrical was birthed and there was a feeling of excitement in the air.  We were on the cusp of huge political and sociological changes and in those times the art in music becomes of huge importance and significance,  We were, and are to some extent, what we choose to listen to. I see parallels between then and now and think what is on offer at the Manchester Meltdown Summer All Day event reflects that….

The bands playng are;

Monkeys In Love.   Expect to be intelligently provoked.

Flea – expect to be shaken and stirred.

The Sandells offer a sound akin to the early 70s underground infused with a punk sensibility – expect a surreal adventure.

The angular buzz of Bobbie Peru – expect to twitch

Drink and Drive – bass heavy rhythm , squalls of guitar noise and a singer spitting out bile at once humerous and vicious. Listen here.

Factory Acts are electronics with a human heart – expect to be beguiled.   ( Bandcamp.)

Manchester Meltdown all day summer spectacular  is on SATURDAY  23rd JUNE 2018  at The Peer Hat,14-16 Faraday Street, M1 1BE Manchester.

Early Bird Tickets £7.50 On the Door £9 (subject to pre-sales not selling out)  Facebook Event Page

The thoughts of Ian Moss – introduced, compiled and edited by Ged Babey.