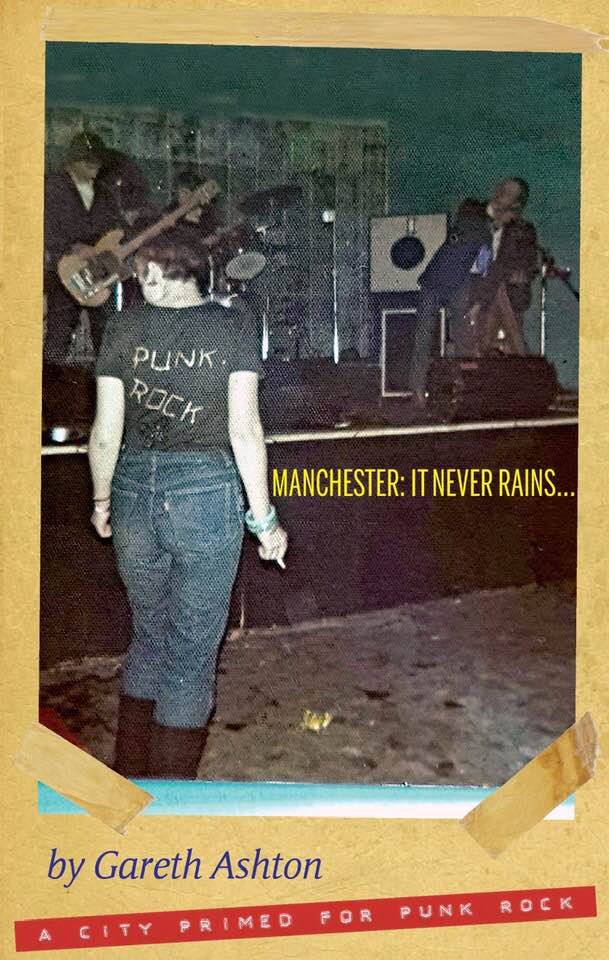 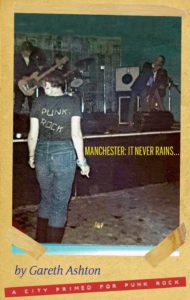 Over thirty interviews make up a patchwork Oral History narrative of 1976 Punk Rock in Manchester, skilfully put together by the author. This is not Tony Wilsons version – its the voices from the dancefloor of the gay clubs and the streets of the council estates…getting a chance to tell their stories. ‘It’s brilliant’, says Ged Babey, ‘some of the greatest (punk) stories (n)ever told… but I bet a few have still been left out.’

Not yet another book on the early days of Punk Rock?  Yeah, but this is a thoroughly worthwhile, conversational and entertaining account with previously unheard voices and facts emerging, as well as some great anecdotes.   The author keeps his narrative to a minimum, to give the eye-witnesses and combatants all the space they need to tell the story in detail. Quotes from George Bernard Shaw, Isaac Asimov, Plato, and Confucius introduce various chapters, giving an air of intellectualism, but are balanced out by ones from Iggy, Joey Ramone, Ian Brown and various contributors.

Gareth Ashton was only 11 in 1976, drumming in bands by 13 but he was on a mission to discover everything about what went on in the city before his time. His biog says. ‘Writing is his hobby. Music is his life’, which personally I can relate to.

When I tried to compile an oral history of my local punk scene (which remains unfinished) what starts off hugely enjoyable ends up a something of a nightmare.  Interviewee’s accounts disagree on basic facts, the best stories -which tend to involve some kind of illegal activities or dodgy political leanings, have to be left out, old rivalries re-emerge, the ‘punk wars’ had it’s casualties…

Ashton seems to have overcome any such problems as there is simply so much to discuss and the people he spoke to are articulate, unpretentious and honest, particularly it has to be said the women, of whom there are a lot, (nine, the only modestly famous one being Una Baines founder member of the Fall).

The book charts those protagonists from their early life growing up, socially and musically, the impact that punk had on their lives, including the bands that sprung up from it, how it allowed them to express their beliefs, and how it’s ideology has stayed with them up to the present day. The time line is between the early 1960’s until December 1977 (ish). The story is predominantly told through the words of the subjects, after hours of editing face to face interviews and emails, interspersed with my narrative connecting and introducing the differing topics and chapters.  It is a social history document as well as a musical coming of age memoir, a time capsule of days of which we will never again see the like.

Central to the story as it unfolds are Pete Shelley of Buzzcocks and gay scene hang outs Pips and The Ranch. Tales are told, but nothing salacious.

The accounts of Sex Pistols legendary gigs have been covered in detail before in the ‘I Swear I Was There book but more importantly perhaps all of Manchester’s home-grown characters, venues, other landmark events are covered as well as bands who never got their due; the Drones, V2, The Panik, The Worst, Physical Wrecks, the Shock and Nervous Breakdown ( who were even younger than Eater) all get equal coverage with the Fall, John Cooper Clarke and Magazine, which is exactly how it should be, in my opinion.

The are chapters on the Electric Circus, the So It Goes T.V. programme, stories about homemade clothing, the violence on the streets and the terraces, the other venues: Band On The Wall, Rafters, The Oaks, Apollo Theatre… up to the supposed “dissolution of punk at the end of 1977.”  My only complaint with the book is that in true Jon Savage tradition there is the underlying assertion that ‘it was all-over-by December 1977’ – which seems to dismiss all the later waves and sub-genres of punk -and exclude people who chose to be born-too-late…

Buzzcocks roadie and drum tech Fran Taylor seems to have an amazing memory for gigs and some great tales to tell. His John Lydon story I’d love to repeat -but you’ll have to buy the book!  Ian Moss (Four Candles / German Shepherd Records) always has a different take on things, never one for the in-crowd or sheep mentality.  The Buzzcocks/Slaughter and the Dogs rivalry is well known, but the fact (my hero)  Paul Morley was (allegedley) a bit of an arse is a surprise.

What always amuses me is the ‘unity’ of the punks faced with literally stone-trowing kids and knife-wielding Perry boys and the bitching and ‘rivalry’ between bands and their fans -the contradictory essence of every ‘punk scene’ ever since -united yet divided -competitive outsiderdom.

Denise Shaw, ‘much photographed Manchester punk icon’ emerges as something of a heroine, and one of the few people to have a camera at the time. Most of the photos in the book seem to be hers.  Her retelling the experience of the (now priceless) Brass Tacks documentary (above) and the backlash is interesting and I can’t help laughing at her dads comment, after hiding in his shed during filming: “I hope the BBC are paying us for all the bloody electric they’re using!”

For people who were there, and those still fascinated by the ‘original Punk era’ from elsewhere, this is an indispensable book -not least for accounts of legendary and ‘lost’ bands like The Worst -interviewed in the Brass Tacks documentary, but music-wise never captured on tape for posterity, and The Shock – all-female Mancunian equivalent to the Slits, who also never recorded anything sadly. Juliette J Williams story about a supportive Joe Strummer is a great one, showing him in a very good light.

Oh, and you find out which bands poster Howard Devoto had on his bedroom wall in 1977… that was a shocker!

For young readers it must be hard to imagine a world with no internet, mobiles, just three TV channels… where mullets, kipper ties and denim flares were the norm and a haircut and a kind of trousers made you a target for abuse … and music gave outsiders a voice and something to call their own… and somehow leave an indelible mark on popular culture for decades to come.

An excellent book overall, put it on your bookshelf between Andy Blades Outside View -the Secret Life of A teenage Punk Rocker and Stephen Dobsons, The Man Who Killed the Hamsters, and just along from England’s Dreaming and Please Kill Me.