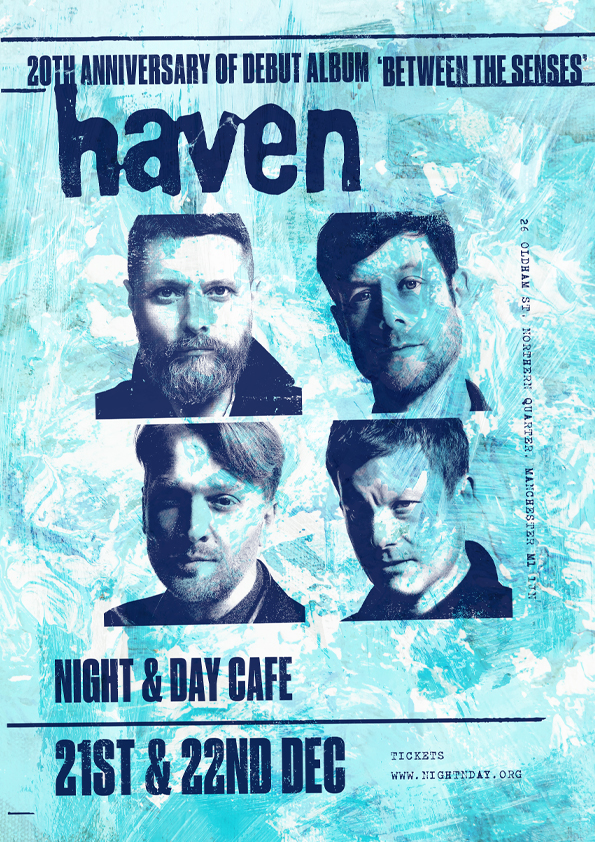 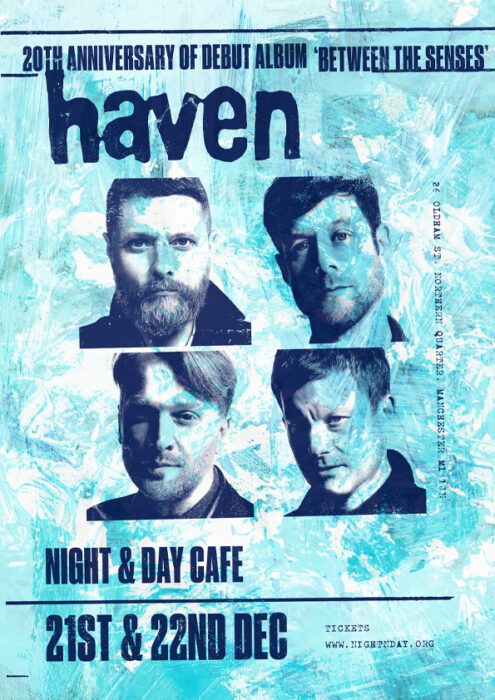 Manchester indie favourites Haven are reforming for gigs at the city’s Night and Day Café Tues 21 & Wednesday 22 December, with profits going to The Christie Hospital.

To celebrate the occasion the band will release a previously unheard Haven song from the vaults ‘All I ever knew’ – a track that was cited for a single release before the band split.

The four-piece, known for early ‘00s indie anthems such as ‘Say Something’ and ‘Til The End’, will take to the stage to celebrate the 20th anniversary of recording their debut album ‘Between The Senses’.

Originally formed in Cornwall, the band rose to international prominence in the early ‘00s after relocating to Manchester at the behest of legendary Smiths manager Joe Moss. After releasing a string of Top 40 singles, touring Japan and the US and appearing on Top of The Pops, the band split in 2005 and haven’t played live since reforming for a one-off reunion gig ten years ago.

Commenting on the gig, frontman Gary Briggs said: “Strangely, and not by design, Jack [Mitchell, drummer] and I found ourselves living within a mile of each other in Stockport recently. Whilst we’ve been in touch loosely over the years since the wheels fell off the band, it was completely coincidental that we were living in such close proximity. We got in touch with the rest of the band and took things from there.

“I think like many people over the past year, we’ve found old connections reforming – you find the people that matter again when you’re forced to be so far apart. Reforming for the gig just feels like the right thing to do and it’s been nice spending time with the guys again. Twenty years since we were in the studio recording our debut album – it doesn’t seem that long ago!”

Tickets for the gig are available from: Night and Day

Haven formed in the late ‘90s in Cornwall after frontman Gary Briggs met guitarist Nat Wason in a record shop in Penzance. After being scouted by legendary Smiths manager Joe Moss, they were convinced to move to Moss’ native Manchester, where they quickly picked up a both a new drummer in Jack Mitchell and a devoted following of music fans at the influential Norther Quarter venue the Night and Day Cafe. After the band signed to Virgin Records imprint Radiate, Moss drafted in Smiths legend Johnny Marr to record their debut album ‘Between The Senses’ in summer 2001, which hit the UK Top 30 on its release in February 2002. The record spawned two Top 30 singles in ‘Say Something’ and ‘Til The End’, the latter of which secured the band a spot on Top of the Pops. After extensive global touring, including multiple trips to Japan and the US, the band returned with second album ‘All For A Reason’ in 2004. With their record label subsequently collapsing, it would prove to be Haven’s final album and the band went their separate ways in 2005.

Following the split, Briggs and Wason teamed up again to play in new band The Strays whilst Briggs also fronted Freebass, the short-lived supergroup which featured legendary Mancunian four-stringers Mani, Peter Hook and Andy Rourke. Wason has also worked with Hook in his band Peter Hook and the Light and played in Ben Howard’s side-project A Blaze of Feather. Meanwhile, Gronow and Mitchell formed Manchester band Mutineers with members of Marion, The Cardinals and The Healers, before being recruited on to play as the rhythm section in Johnny Marr’s solo band, recording and touring with the Smiths icon.

You can hear an extended interview with Gary Briggs and Jack Mitchell talking about the history of the band and their reunion on the Demo Tapes podcast :