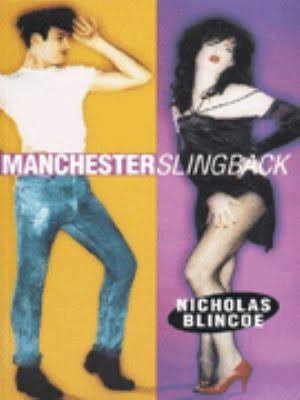 Twenty years ago Nicholas Blincoe wrote the award winning crime fiction book, Manchester Slingback, based in Manchester Gay Village – in this he revisits the area and is surprised by its change for the worse.

I took a trip back to Manchester’s Gay Village, twenty years after it inspired my novel Manchester Slingback. It is hard to recall why the village was such an uplifting experience in the mid-90s, when it provided the backdrop to television shows like Queer as Folk. In many ways, today’s village is closer to the underworld of the 1950s and 1980s: it is down at heel, semi-legal, and more than a little seedy. The canal is a centre of prostitution, there are problems with drugs, especially the so-called Legal Highs (or legal, at least, for another week in May 2016). The rise of an urban myth about a serial killer who stalks the canal might be a sign the Village is sinking back into the shadow world of its past.

The area along the canal off Princess Street (Princess Street!) became a centre of gay life when gay life was illegal. Bounded by a coach station and a railway station, the village attracted male and female hookers and their clients.

In the 1980s, younger gay men travelled to the gay village for a disco at the poly building on Aytoun Street. Other, lost young men would hang around the coach station. The pubs were a mix of older gays and younger boys and girls cadging drinks.

It is something of a surprise that the same pubs all still exist. The fish and chip shop is still there, too, and so is the sex shop, selling leather boy outfits and calendars. But if nothing much has changed, it is odd that nothing particularly recalls its glittering hey day twenty years ago, either, when the Village was a beacon of hope for a new and tolerant Manchester.

The Gay Village went over ground after the police chief James Anderton retired. He was a Christian fundamentalist so hostile to gay life that police raids became a regular feature of the village. In his interviews in the local paper, Anderton pontificated about the evils of sodomy and the righteousness of AIDS-as-punishment.

Once the harassment ended, the nineties version of the Village was born. There were dark warnings from radical gays about the Disneyfication of gay culture, but it never felt like a sell-out to visit expensive-looking new bars, and celebrate gay life.

It felt that a progressive, liberal attitude could be the foundations of a kinder Britain more at ease with itself.
It is impossible to say that anything has gone wrong, quite. Manchester keeps reinventing itself. True, old Victorian buildings are hard to renovate, so new developments keep following the route of the canal, further and further from the old city quarters.

The results would look as much at home in Dallas or Toronto as Manchester but they are not disasters: they are just characterless. Austerity has meant there is less street cleaning, and the Gay Village looks dirty as well as tired. The pubs are past their best on the inside, too, because once the ghetto walls have come down, gay men and women are free to eat and drink wherever they want. The Village has competed by offering cheaper night outs, and a cheap night out is a lairy night out.

Manchester Slingback is being re-published, eighteen years after it won the Crime Writers Association Silver Dagger. I revisited the Village to remind myself of the inspiration, but found I was beset by older memories from the early 80s. Before the revolution.

The Village once reassured us we were winning: this was a progressive world and the bigots were on the decline. It is harder to say that with confidence, today. My novel, Manchester Slingback, is set in the aftermath of the Euro 96 bombing by the IRA. It seems crazy to think that we laughed the bombing off. Those days seem a long time ago in a new climate of fear inspired by sex, race, religion, terrorism and refugees. What is there that plays the role the Gay Village once did, when the Village was the best of Manchester?