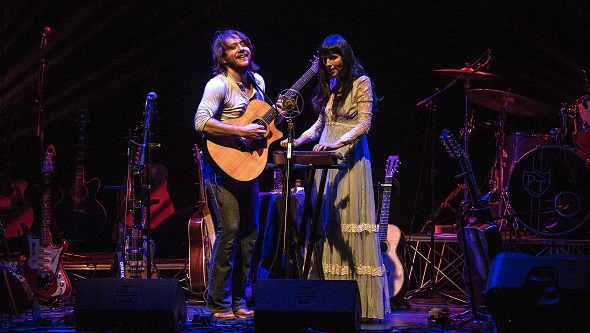 Venue: Home and other local venues

Last October Manchester Folk Festival returned to run alongside the English Folk Expo, for a second year in Manchester. We cast a retrospective eye over the events again based around HOME , taking in venues in the city centre that celebrated Manchester’s heritage as an industrial working city and also a hotbed of the arts to show off the best in English (and Welsh) folk music.

Thursday arrivals might have been caught up in the occasional rebelliousness  and vibrance of the the Xtra Mile stable of Skinny Lister, Beans On Toast and Will Varley on show at The Ritz; a sense of déjà vu as Beans and the Skinnies have been on the bill recently, yet  a more refined and genteel alternative was on offer at Home with the Askew Sisters and the Melrose Quartet. Already, the urban folk festival throwing up quandries of who to see and here to go depending on your taste. There was  literally something more alternative at Gorilla with Tunng and Bird In The Belly giving the alt folk field a turn over and representing a feat of programme juggling by the festival team to ensure that they offered a huge range within the one genre. 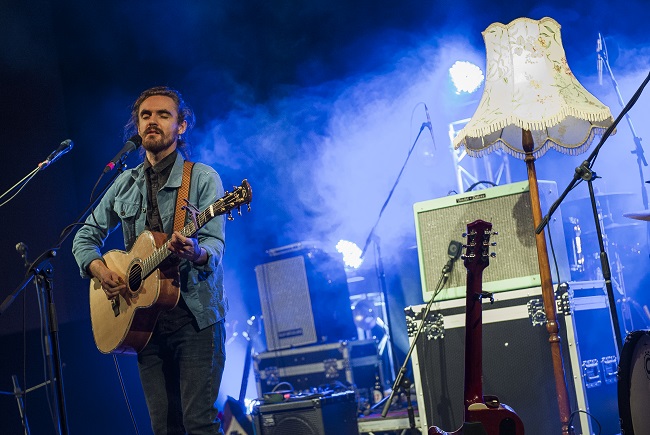 Although a Thursday work night might not always be the most palatable of festival openings, Friday night’s less choice didn’t result in any lessening in quality. You only had to hold your breath and  hear Ben Savage & Hannah Sanders doing Ribbons And Bows (HIGHLIGHT 1) and you were soon in weekend festival mode. Avoiding yet another   festival performance  by Lindisfarne ,  the choice of  Eliza Carthy and Blair Dunlop at the Great Northern Warehouse, an industrial space cordoned off for the show, was a no brainer. Iron girders and bare brick walls provided an atmospheric backdrop as Blair Dunlop and his small band paved the way for a low key but classy set – he managed to hold on until the very last moments before ripping into an electric solo – paved the way rather nicely for the Wayward juggernaut to seep  through. Energy, finesse and fun with folk music and the prospect of more to come as they ready new material means that the days of the big folk bands aren’t over by any means. 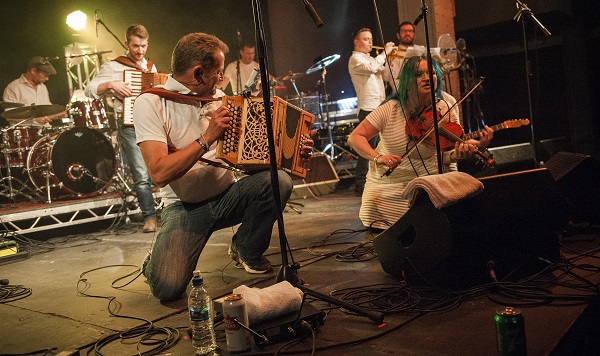 Now, although the Expo delegates are scouting out the events for their own events, some things are just for the Festival goers, so expect some confusion and curses  when the Expo delegates are networking at the Bridgewater Hall as Lady Maisery are sneaking in a festival show down the road.  It’s the refined confines of Home that provide the Satuday treats with for many, a first chance to catch Rachael McShane and her Cartographer trio, the legendary vocal prowess of the Wilsons and also the studious presence of Sam Lee. However, the Dan Walsh Trio that features Ciaran Algar lending his musical weight alongside Nic Zuppardi, means there’s a whirlwind down in Theatre 1 as Dan treats his banjo like an electric guitar, low slung and head shaking, living the dream.

Of course, festival means that having to make choices, some you don’t mind missing and take it as going with the territory, but there was a tinge of  regret at not being able to catch Catrin Finch and Seckou Keita on what was reportedly a dazzling virtuoso set, yet on the other hand…

Crammed into the table and chair cocktail layout which seemed rather incongruous (and also not the best use of space) in Theatre 2 for Coven – their, by now familiar and glorious  version of Kate Bush’s This Woman’s Work (HIGHLIGHT 2) absolutely angelic and emphasising the real need for them to scour the songbooks again to delight us with another Coven collection. Rather Coven than the more obvious choice of The Ritz where Billy Bragg was holding court after an interesting set of experimentalism from You Are Wolf. As with Lindisfarne, you probably didn’t miss anything and from checking out his setlist later, it seemed a shame he didn’t acknowledge the locale by doing Kilroy Was Here that he so splendidly covered on the Ewan MacColl tribute album, being within spitting distance of the dirty old town that he sang of in the eponymous song.

And there’s the festival rub – choices, choices, choices.  And even more so for the delegates who attend the English Folk Expo who reap  further treats aside from viewing showcases by 42 artists over three days, with visits to the Great Northern Warehouse where music from the Welsh partnership was in full swing, the  People’s History Museum and the Mechanics Institute where they were showcased even more artists looking for their opportunity to knock. The latter emphasised how much personality can play in making an impression; in abundance with Tracey Browne and particularly Avital Raz who made sure that many won’t forget  her too quickly with the  ‘did I hear that right?’ moment of the weekend as she sang  “I was fucked in the ass for peace” (HIGHLIGHT 3).  The Both Sides Now programme that supports emerging female artists is something the English Folk Expo have a strong commitment to alongside the Keychange model that aims to encourage a greater proportion of female acts on festival bills. There’s more to MFF/EFEx than just music.

But moving on, the usual worst kept secret of the weekend revealed that we’re remaining close to home as the international partners for 2019 will be  Scotland and knowing the passion and customs in their traditional music, whether or not the Treacherous Orchestra will be bringing chaos and musical carnage  to Manchester, that should be quite a thrill.