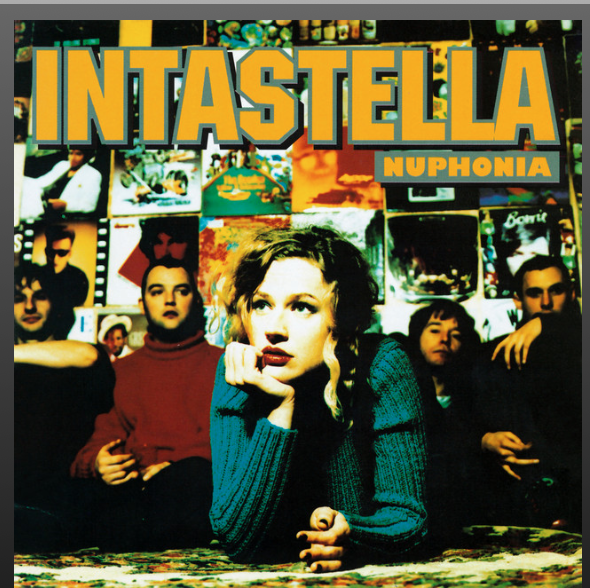 Intastella were one of the great lost moments in the Manchester musical narrative. Along with their friends, World Of Twist, they were the next adventure after baggy and into a new pop age. Both bands had great record collections, a perfect pop nous and a psychedelic underground twist and perfect pop songs

Built around the charismatic Stella the band had form.

Pre Intastella the core of the group had been in Laugh who were arguably the first band to combine the new dance floor sounds of the Hacienda with indie and create indie dance.

Intastella had the technology, the smarts and the songs but somehow it didn’t happen in major top 10 style and they were caught in cult status on the edge of the top 40 and the breakthrough. Listening now makes you wonder how they didn’t break massive and years later their catalogue is finally on streaming platforms so everyone can catch up with their adventures.

Stella explained to Louder Than War about the music going online…

‘I’m delighted to say the INTA STELLA repertoire as released by the Planet 3/Sanctuary label is NOW available on all relevant online platforms. “WHAT YOU GONNA DO” “NUPHONIA”, and “INTASTELLA OVERDRIVE”. It’s something I’ve personally wanted for such a long, long time..

I’m so very grateful to Cora Romain at Nananda Music for her perseverance in this & for making it happen & to Don Gallahger for his support & guidance.

If it’s ok to blow our own trumpet. I reckon it sounds fresh & ace. I’ve no CD player and only listen to vinyl so I’ve not heard a few of these tracks for 20 years!

For most musicians having their work past and present online is not an issue. It was for Intastella. I’ve tried before to locate our stuff but had little success. Hitting many dead ends as past Labels were  sold to other labels and all ending with the big guns.

My semi- auto biographical play “The Rise and Fall of a Northern Star” caused a bit of further Interest in Intastella as a band. Through this I met up with people including Don Gallacher knew about the process of doing this and directly helped me to locate our stuff. The majority of our repertoire had ended up locked away in the dungeons of BMG.

With the help of the determination of Cora Romein at Nanada Music. (Intastella’s new publishers) putting the work in and chasing this up we finally got Intastella’s  2nd 3rd and 4th albums online.

For me it’s brilliant to have our music accessible online and even on Spotify because I don’t expect financial gain from this just the ability to find my own songs and play them on today’s devices. One or too make me squirm but some make me soar. It’s so good to be able to hear the journey we made. I remember many of the recording sessions.

Most fun was probably recording tracks for the ‘What You Gonna Do” Album in Rockfield Studios with producer Paul O’Duffy and Ridge Farm with John Pennington and the rest of the band  – Spencer Birtwhistle, Martin Mittler, Martin Wright and also the late  Ian Bendelow and Little Ants Green

“Nuphonia’ was really DIY even down to the cover which was a photo taken in mine and Spencer’s front room. With our album collection stuck on the wall behind us.

It’s an Emotional album with a bit of anger and pathos marking the end of the band and certain relationships. The production was all over the place but I love it. My favourite tracks on there after re-listening are ‘Manchester ‘ and ‘Over & Out’ I had forgotten how rocky we were.

“Intastella Overdrive” is a compilation and contains tracks from the first album.

The MCA releases and the album Stella and the Intastella Family of People are hopefully next on the list. (you can also listen on Itunes)