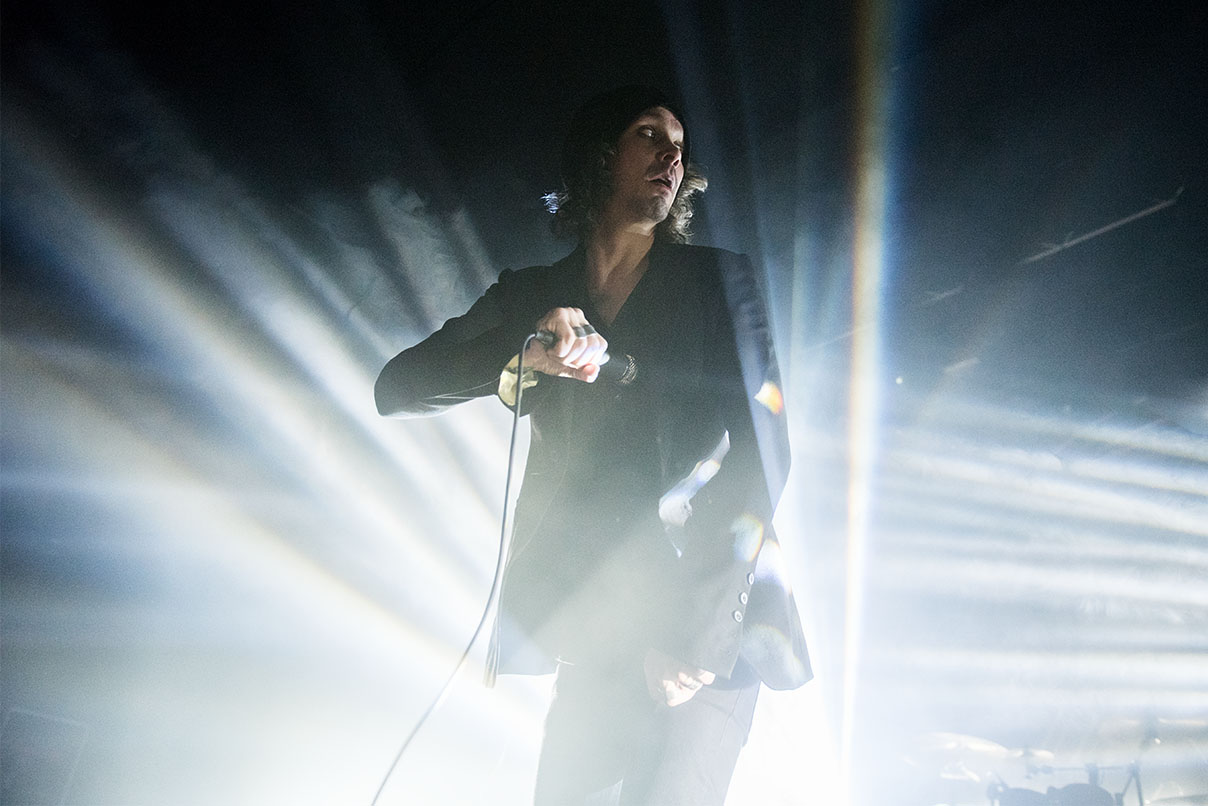 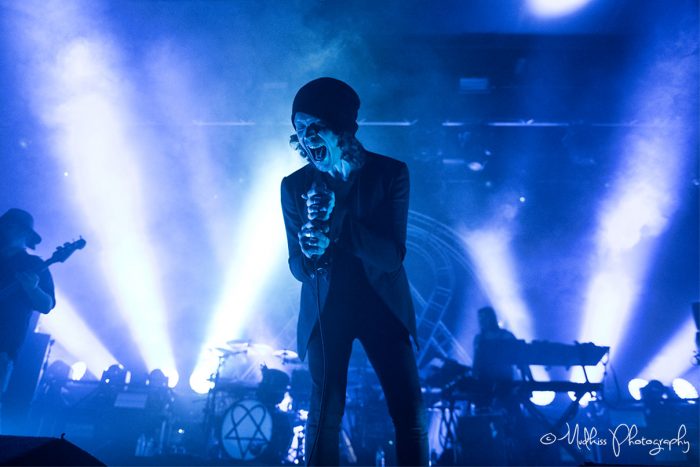 March 2017 and after a sensational 26 years creating a striking combination of goth, metal and rock with heartbreaking emotional lyricism, Finnish heavyweights HIM announce their farewell tour. Frontman Ville Valo said of the decision “After quarter of a century of Love and Metal intertwined we sincerely feel HIM has run its unnatural course and adieus must be said in order to make way for sights, scents and sounds yet unexplored. We completed the pattern, solved the puzzle and turned the key. Thank you.” Louder Than War’s Melanie Smith and Katie Clare went to take in HIM’s last ever Manchester show.

For those in need a potted HIM band history; Established in 1991 in Helsinki, Finland by frontman Ville Valo and bassist Mikko (Mige) Paananen. Originally going by the moniker His Infernal Majesty, the band experienced several break ups/hiatuses’ during their subsequent two and half decades. Members came and went however, ultimately restructuring successful each time. The band have released eight studio albums and are one of Finlands most successful bands managing to find consistent respect within both the underground and mainstream music scenes. Having decided that they have done all they can in this guise they are completing the final chapter with farewell tour including four UK dates. Here at their penultimate date at Manchester’s Academy there is an atmosphere of jovial, slightly giddy reflection. As bassist Mige said “It shall not be a weepfest but a celebration of love metal in all its lovecraftian glory!” and mostly it is.

The iconic HIM heartagram filled the centre portion at the back of the stage. Its metal somewhat chameleon like as it changes to the colours of the lights around the stage. A talisman to all that HIM are reproduced with affection and dedication throughout the audience. Visible on t-shirts, on chains around necks and on skin: a symbol of eternal devotion and a nod to understanding and being understood; at least this how I assume it to be. 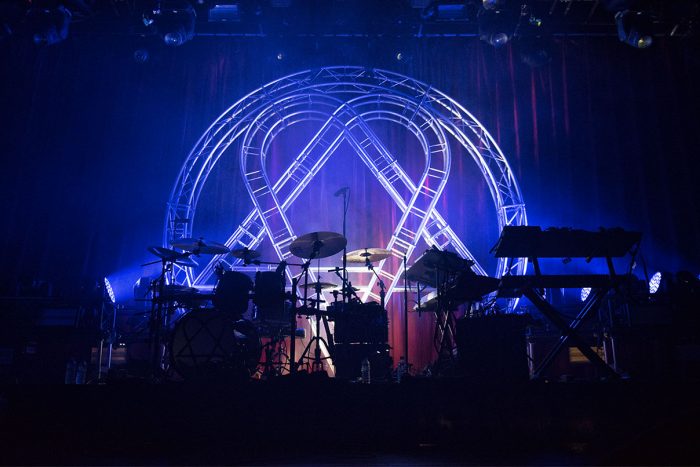 The power of the positive viewpoint is indeed potent however, sometimes the negatives are too numerous to ignore so let’s get some of the multitude of those out the way first. The Academy in its various guises are not personally favoured venues. The location and staff unfaultable but the viewing vantage points inside are limited at best. Tonight, we’re in the large one level square space which for anyone past the first twelve rows and under 6ft 4″ means you’re seeing the back of someone’s head much of the night. Then there was the crew of people arriving just prior to HIM’s start time. They threatened to punch people in the head who would not move as they pushed themselves  further into the audience, ultimately aggressively ramming themselves forward while intimidatingly growling and laughing. When HIM do take to the stage they remained barely lit and are mere hazy shadows to most of the audience for the entirety of the show. Lovely light show just none of them lights illuminating the performers. Glass half full though the sound was decent. That is until the music stopped and all you could hear were the dozens of people having part shouted part screamed conversation with each other. Whatever pearls of wisdom Valo was imparting were undistinguishable over blah blah blah screech screech screech. 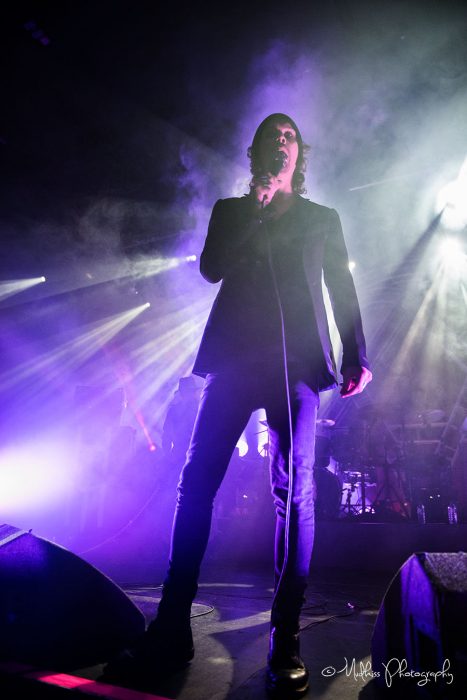 Putting aside these issues, the set opens with Buried Alive by Love: beautifully creating a bounce in the crowd and maintaining the tempered atmosphere they continue with Heartache Every Moment. Valos’ vibrant vocals delivers a wealth of impeccable melisma throughout Your Sweet Six Six Six, The fragility’s of The Kiss Of Dawn is slightly lost in the vastness of the space however gives Linde Lindström and Paananen the chance deliver a taster of the breadth of their abilities.

The voices of the crowd match Valo’s amplified vocals through Rip Out the Wings of a Butterfly. Welcoming Gone With the Sin with the same enthusiasm however, allowing Valo’s luxuriantly deep vocals to vibrate the air without as much back up. There is an unexpected mixed response to Wicked Game abundant pockets of people sing a long while there is a notable stillness in some areas and an extended guitar solo persists a little too long; a swath of the crowd’s attention wanes. The lull is short lived as everyone is back on board throughout Killing Loneliness, Poison Girl and Bleed Well a trio of tracks flooded with melodrama and dynamic rhythmic zeal from drummer Jukka Kröger. 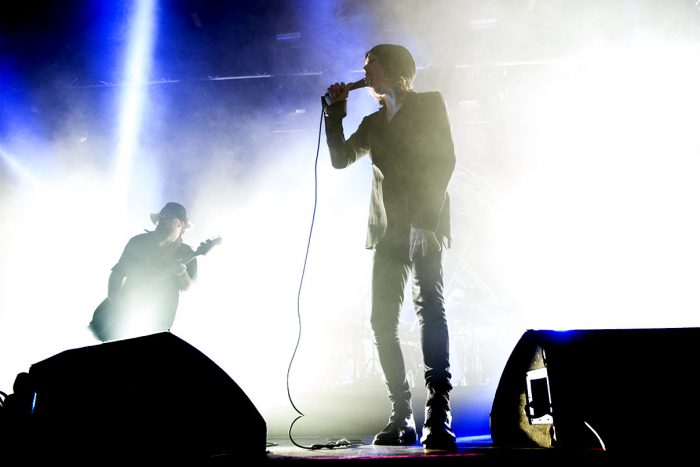 The response as songs are recognised is getting more frenzied as the set moves forward at a rapid pace. Join Me In Death, In Joy and Sorrow and The Funeral Of Hearts once again see the voices of the crowd soar and as the final chorus is sung the microphone falls to the floor and the band, to intense applause, leave the stage. The passionate cheers and chants seem to continue longer than expected and there is a slight anxiety in the air as the audience rally and increases the roar for more.

Returning for their encore HIM first deliver an in-homage cover of Billy Idols Rebel Yell and draining the last drop of melancholy from the air, deliver their final, an earnestly heartfelt When Love and Death Embrace. Even one hit mediocrities who sound tracked a microscopic part in your life have had an impact – even if it is one of groan inducing recognition. So, here we are the conclusion of a band who have stimulated, affected your passions, your character and life, It is going to provoke inescapable emotions. Little (figurative) fractures tear through hearts rippling through the crowd, as tears descending cheeks – waves of applause roar around the Academy’s walls.

Tonight, we experienced a compendium of HIM’s skilfulness in creating and mixing melody, lyrics and ambience. A perfect reminder of what we can access forever. Tonight, has also been a thought-provoking conclusion of HIM as a creative and performing entity which they delivered with dexterity and poignancy. The perfect farewell gig? For those that could see it = it probably was.

Please note: Use of the images in any form without permission is illegal. If you wish to use /purchase or license any images, please contact mel@mudkissphotography.co.uk

HIM Bang and A Whimper (The Farewell Tour) concludes with two London dates:

Sunday 17th and Tuesday 19th December at The Roundhouse, London. These dates are sold out, please avoid secondary ticket sites and consider fan to fan and face value ticket sellers such as Twickets.

HIM official merchandise can be found at their online store and the band can be like on Facebook.