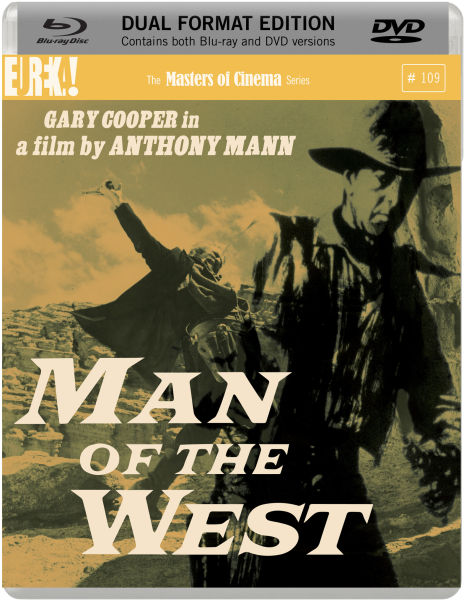 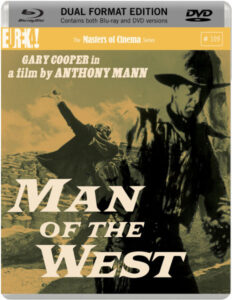 Said to have anticipated later westerns by Sergio Leone and Sam Peckinpah, Man Of The West has just been become available on  Blu-ray for the first time in the UK. This is Jamie Havlin’s verdict on the latest in Eureka’s Masters of Cinema Series.

Here in one of his last great roles, Gary Cooper plays Link Jones, a laconic man with a past he’d rather forget.

He has a plan to travel to Fort Worth in Texas in order to recruit a teacher for the school that his small frontier town of Good Hope aim to open in the very near future. He appears to be one of life’s good guys even though he’s packed a pistol in his kitbag.

Just before boarding his train he strikes up a conversation with a local small time crook, the dapper and wisecracking Max Beasley (Arthur O’Connell) which is viewed closely by a suspicious sheriff who then questions Link, believing that he recognises him. Link gives him a false name and claims not to know him. When asked, he also denies knowing an outlaw named Dock Tobin.

The train is held up by members of the Tobin bandit gang and during the ambush Link is knocked unconscious. Worse still, his bag containing the money to pay the teacher a year’s salary in advance is stolen by a man sitting across from him on the train and Link, along with two fellow travellers, Max, and saloon singer Billie Ellis played by Julie London – yep, Cry Me a River Julie London – find themselves stranded one hundred miles from the nearest town. Max has hurt his leg and can hardly walk and according to Link, Billie’s shoes won’t last a day. Her dress looks even less practical.

Trains to Fort Worth travel only once per week but Link at least has some knowledge of the area where they’re stranded and leads his companions to a dilapidated shack and barn where they should be able to take shelter for the night.

This was once his home and he is surprised to discover that some people from his former life are still using the place as a hideout, including one time mentor and father figure Dock Tobin (Lee J. Cobb), the grey and grizzled leader of the gang. The men who attempted to hold-up the train are also there. With their knowledge of that event, Link, Billie and Max are a threat to the criminals and subsequently they are held hostage.

Dock has been hurt for years by Link’s decision to bow out of crime but part of him wants to believe that he is back and happy to rejoin his gang. Cobb gives a histrionic performance as the volatile old man, barking out commands and cackling almost constantly at his own observations. Interestingly for trivia fans, Cobb was around a decade older than Cooper, though he does convince as a man many years Cooper’s senior.

The gang have obviously suffered a decline since Link’s departure and Dock begins to recall what he likes to think of as the glory days when Link was his right hand man. When Link declares he wants back into the fold, Dock begins hatching a plan to rob a bank in the town of Lassoo, a heist that he has always dreamt of and one he reckons will be very lucrative.

The film’s finale will likely not surprise too many but it’s still fascinating to see how Mann manoeuvres his characters towards their showdown in this economically told, dark and unconventional western. 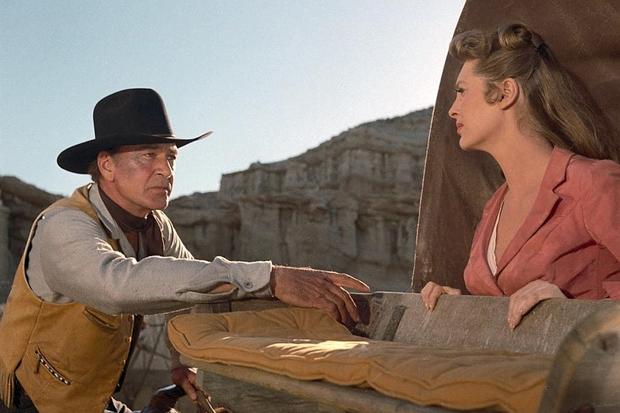 Initially Man Of The West met with a lukewarm response from American critics, although Jean Luc-Godard claimed that it essentially ‘reinvented the western’.

The film deserves a far better reputation and is definitely worth seeing, even if, like me, you are not generally a big fan of the western genre and it’s a fine addition to the Masters Of Cinema catalogue.

Extras include an exclusive feature length commentary by Glenn Kenny and Farran Nehme, a new 18 minute video interview with Douglas Pye and a 44 page booklet with writing by Jean-Luc Godard and Robin Wood.

For more on the film, head to the Eureka website.