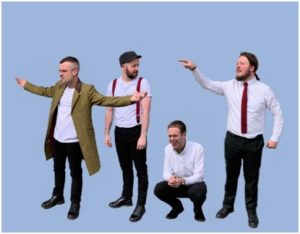 Louder than War’s Ioan Humphreys gets to hear the latest single from the always brilliant Man & The Echo.

Since forming in Warrington in 2015, Man & the Echo – comprised of Gaz on vocals & guitar, Fush on bass, Chris on keys and Joey on drums – have relentlessly pushed forward and quickly evolved their particularly British take on indie art-pop. ‘Men of the Moment’ is Man & the Echo’s second album and takes the spirit of the band’s 2017 debut and refines it into a condensed brew of uplifting rhythms, tongue-in-cheek lyricism and gleefully melodic instrumentation that form the band’s unique sonic presentation, captured expertly by producer Raf Rundell (The 2 Bears).

A major coup for the band was to get viral artist Cold War Steve to produce the album artwork. “We had the idea whilst we were in the studio that he would be great but didn’t imagine it would be possible. Then Raf somehow got his number and he was pretty happy to do it so we were delighted. He’s adept and framing and ridiculing exactly who we were talking about so its a perfect fit. The cover could almost be a cast photo,” Gaz explains.

The track is (for me) the right side of poppy with a definite bouncy rhythm that recalls both Talking Heads and Orange Juice. It also has a very Post Punk feel to it with its spiky vocals and almost afro beat funk influence recalling A Certain Ratio.

The pain of Brexit, nationalism and inward thinking is all over this record. It’s incredibly upbeat about an issue that is a major crisis for the country at the moment. However, this isn’t to say that they aren’t taking it seriously. Far from it. They are tackling it in their own wry way that echoes fellow artists and performers.

I think Man & The Echo have their hearts in the right place and have managed to conjure up some of the most infectious 3 minutes of pop excellence you will hear so far this year.

And whether it’s Brexit or not, going forward, I reckon Man & The Echo will have a brilliant musical response to whatever society presents.

Life On An Island is out now on digital format.