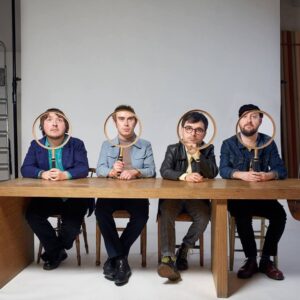 Man and The Echo – Distance Runner

Louder Than War’s Ioan Humphreys has a listen to some Northern pop soul courtesy of Man and The Echo.

Man and The Echo are a four piece from the north of England and on the 18th November 2016, they release their self titled debut album on 1965 Records. As a taster from the forthcoming LP, the band has released the video for lead track ‘Distance Runner’.

Starting with an infectious throbbing bass line and an insistent drum beat, the baritone voice of lead singer Gareth Roberts kicks in and he croons his way through the first verse. The lyrics are very much about the mundane aspects of life that the band seems to revel in.

Immediate comparisons are The Divine Comedy, especially when the organ kicks in, but the lyrics and delivery by Roberts also shout early Richard Hawley.

But it’s when the chorus comes in that this band really comes into its own. It’s big, gorgeously sung and becomes quite euphoric and reminiscent of Deacon Blue or ABC?

If ‘Distance Runner’ is anything to go by, then the debut album is going to be something very special. Man and The Echo are respectfully firmly rooted in the North(ern Soul?) and its imagery and history. It’s really lovely warm stuff.

Man and The Echo can be found on their Facebook, Soundcloud and they also tweet as @ManandTheEcho.