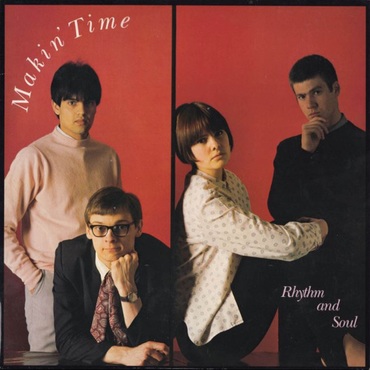 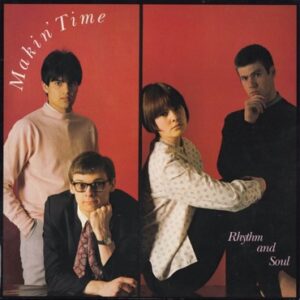 Eddie Pillar’s Acid Jazz have recently reissued Rhythm And Soul, the debut album from Makin’ Time, on vinyl, the first time it has been available in this format since its original release in 1985.

Makin’ Time should have been massive but burnt brightly and sadly faded away before getting the adulation and success they deserved. They had the looks, the sound and a great following.

There are various routes to Makin’ Time, but for me it was via a love of the Jam and Style Council. Along with likeminded friends I discovered them via the 5 4 3 2 1 Go: The Countdown Compilation, which featured the track Only Time Will Tell. (The Countdown label being run by Eddie Pillar and Maxine Forrest as an imprint of Stiff).

Some may have become aware of the band though the 3rd single, a cover of Elvis Costello’s Pump It Up. Others, perhaps most, will have come to the band retrospectively through bass player Martin Blunt being a founding member of the Charlatans. In fact he’s the only original member in the band as we approach 2021.

Whilst Martin may be the most familiar name, Makin’ Time were definitely a sum of their parts. Mark McGounden (vocals/guitar); Fay Hallam (organ/vocals); and Neil Clitheroe (drums) all being as vital to songwriting duties and sound the band produced.

All hailing from the Black Country, specifically Willenhall, Wolverhampton and West Bromwich, the group built up a solid reputation as a great live act supporting many touring bands (such as The Untouchables from the US) as well as British Ska legends Bad Manners. They were slightly younger than the Mod Revival bands that had begun to appear around 1979. Makin’ Time produced a glorious mix of power pop and 1960’s soul which was a breath of fresh air to the teenage me. I’d been into bands which my siblings or school friends had been listening to; the things that were played on the radio or shown on Top of The Pops. Hearing this album was my first experience of being invited into a ‘special club’ where only a limited number of people knew what was happening. 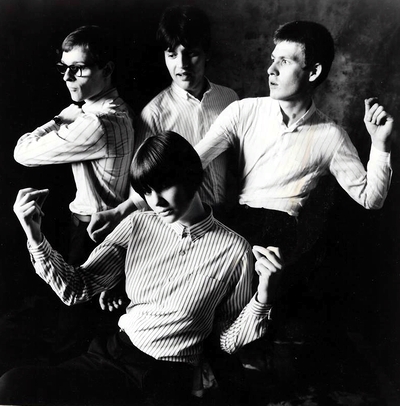 Rhythm And Soul still sounds as vibrant and fresh as it did 35 years ago. I defy anyone placing this new vinyl release on the turntable not to get up and dance.

From the opening Take What You Can Get, with Mark and Fay’s vocals mixing and underpinned by the driving organ, it doesn’t let up. Side 1 features the wonderful, yet criminally overlooked singles Feels Like It’s Love and Here Is My Number. Not until you get to the end of the side is there a chance to breathe as the moody/sultry almost Doors-ish Honey offers some respite.

Side 2 kicks off with a faithful cover of The Kink’s I Gotta Move before moving onto the slightly jazzy Where The Rhythm Takes You. Other than the singles my stand out track has always been The Girl That Touched My Soul. It takes me back to being 15/16 and falling in and out of love every other week, a soundtrack to more innocent times. The album ends on another couple of absolute crackers; the stomping I Know What You’re Thinking and the infectious Stop This Crying Inside.

Not long after the album’s release, parent label Stiff began sliding toward bankruptcy. Madness, who had been a big success for them, moved to Virgin. Pump It Up was recorded as a directive from Stiff supremo Dave Robinson and put out as a single. Another track, Unchain My Heart was ready to go, but was dismissed by the label and didn’t surface until 1988.

After the collapse of Stiff the band self-released the follow up, No Lumps Of Fat Or Gristle Guaranteed. Unfortunately by this point it was all over and coming to an end. The posthumous live album, Time Trouble and Money (released on Re-Elect The President; another Eddie Pillar label!), served as a reminder of what a great live act they were and what people late to the party missed out on.

It’s frustrating that there was never an opportunity for the band to perform on a show such as The Tube. I’m sure it would have been memorable. It also adds to the mystique of Makin’ Time that a search on YouTube only turns up a very poor official video for the debut single. There is no actual footage of the band in concert either!

This wasn’t a full stop for the band members. Makin’ Time was actually just a first step in their careers so rather than focus on ‘what might have been’; now is a great opportunity to celebrate ‘what was’ with this upbeat, overlooked classic. 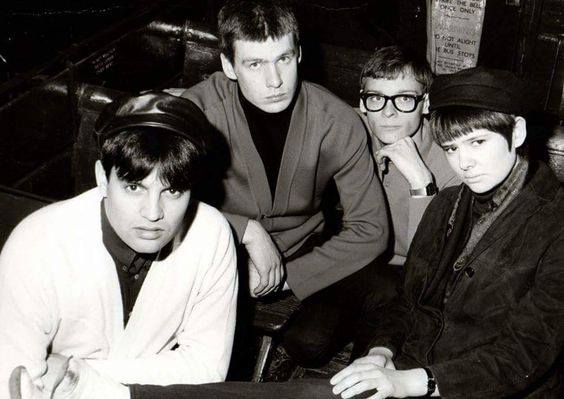 Merch and other Fay Hallam albums from here