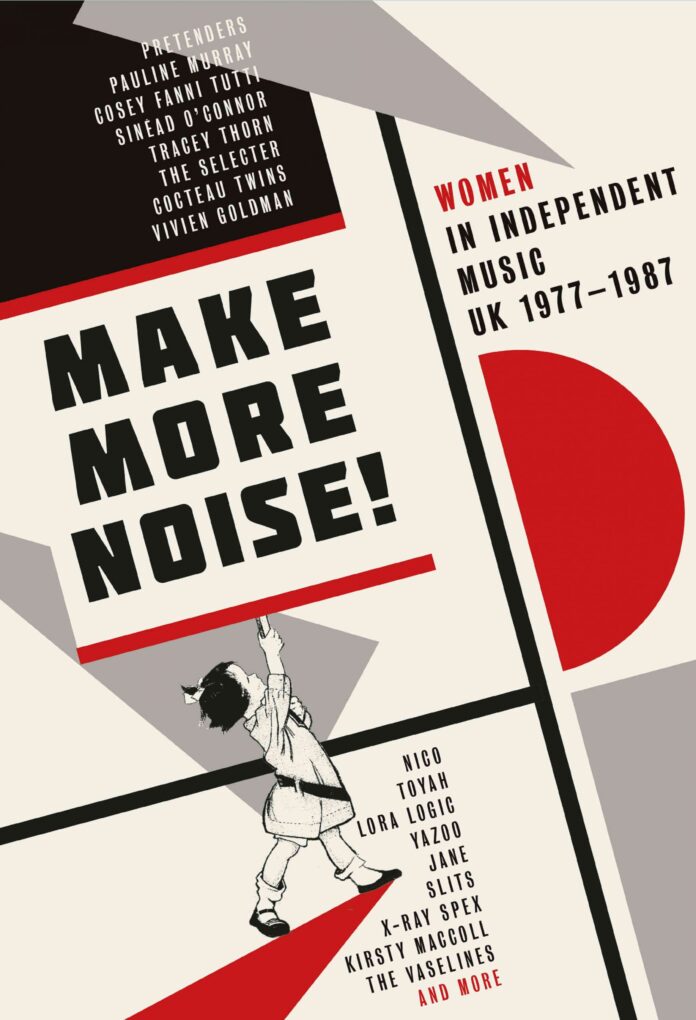 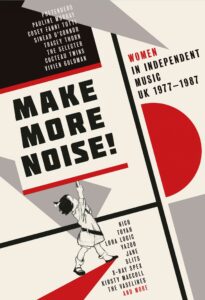 Within the 90 songs on Make More Noise, scattered throughout, is what could be called the Hidden Feminist Herstory of Punk/Post-Punk.  Bands lead-by or predominantly female using punk-inspired music, whether by design or unknowingly, to make feminism accessible and exciting in a way other media or academia couldn’t.

Some people think that little girls should be seen and not heard, but I think… Oh Bondage, Up Yours!   (X-Ray Spex)

Don’t wanna be another bored housewife / there’s gotta be another way of life!  (Androids of Mu)

Hidden from history, women unknown to me. (Bright Girls)

If you can’t get a hard-on, get a gun!  (Vivienne Goldman)

These are just are few of the ones which make this boxed set indispensable not the ‘household names’. There is so much missing from the set though that it is frustrating…

Nothing by the hugely influential Siouxsie (and the Banshees),  or the musically inspirational Kleenex (Liliput). And nothing from Crass (three female members, Gee, Eve & Joy). And where are Delta 5? Young Marble Giants? Altered Images?

CD One alone, as it’s kind of chronological, could have been: Patti Smith, the Runaways (OK, they’re American) the Slits Peel Session,  Jordan singing Lou with the Antz,  Siouxsie & the Banshees, Stinky Toys – and using the compilers criterion that if a band includes one Woman – the Adverts, the Killjoys, the Nips, the Sick Things, Big In Japan, The Doll and Rezillos.  CD 2 would start with Crass (Shaved Women collaborators!) instead of the drama-school play-acting of Toyah (trying to meld Kate Bush and Patti Smith in a bucket of Krazy Kolor)

The best thing that could, and will,  happen as a result of this release is that people will search out what other amazing work lesser-known artists like Lene Lovich, the Petticoats, Poison Girls, Rip Rig and Panic, Voice of The Beehive et al recorded. There is a huge wealth and diversity of female music to discover using this boxed set as a guide. Make More Noise is more of a reference library and starting point…  It’s a incomplete list – with just one example of each artists work. It hops from genre to genre despite being roughly chronological.

‘Independent’ in this context doesn’t necessarily mean an artist free from commercial ambition or unwilling to collaborate with men.

But I would question the need for the Pretenders or the Primitives to be included? Particularly when the chosen song is their biggest hit -albeit a demo version in the latter’s case. The Selecter, The Expelled, Skeletal Family and Darling Buds were predominantly male bands working within the strict parameters of their chosen genre – with three men and one woman working as a team.

Did ambitious stage-school kids like Toyah, Hazel O’Connor and Tracey Ullman really speak for women in any credible artistic way. (Or is this just my personal bias as their music decades on just sounds so awful?)

Choosing the right track to represent the artist is the other problem. I think we have all heard Typical Girls and Violence Grows a million times…   The Au-Pairs track is supposedly Diet by on my copy it’s another song completely (Set Up).  Honey Bane’s Guilty (Dub) is a dire choice when the Girl On The Run tracks are far more worthwhile.  The Invisible Girls track from 1980 is in the wrong place in the running order (where Don’t Dictate should be). The compilers really did take their eye of the ball…

In covering a ten year timescale there seems to have been a bit of tokenism to back up the concept,  cramming in as many (sub)genres as possible.  So as well as Punk, New Wave, Anarcho, Reggae-Punk,  Scratchy Indie proto riot grrrl you get, Two-Tone (Bodysnatchers,  Selecter) New Wave Of British Heavy Metal (solely Girlschool) token Goths (Skeletal Family) a couple of UK82 bands, C86 – a struggle to find any all-female bands apart from Fuzzbox – All-male Creation band Biff Bang Pow are included because on the chosen track they have a guest chanteuse from Revolving Paint Dream. (It’s a great song, don’t get me wrong..)  Electronica is represented by Cosi Fan Tutti and Yazoo. Blonde-fronted bands are there, but not my favourites Leeds hero’s the Parachute Men

There are some great, inspired inclusions though: Massively under-rated acts like  Strawberry Switchblade,  the Flowers, The Heart Throbs, The Passions (and NOT German Filmstar) and many more.  Here are the top ten revelations/discoveries which make this set worth buying.

1/. The Slits/Raincoats/Kleenex inspired bands the Petticoats, Androids of Mu, Skodas, Amy & the Angels, Real Insects, the Objeks were the truest of Punk-Rock-Feminist bands and ‘invented Riot Grrrrl’ long before the phrase was coined and will continue to inspire Rebel Girls and their Boy Allies.

2/. Ova whose track Self Defence is as powerful today as 40 years ago were #metoo long before the movement.  Other material from the label it was on Stroppy Cow Records needs further investigation and there is some great Jam Today (their later band) footage on Youtube here.

3/. Lene Lovich was a one-off genius – finish collecting her entire back catalogue – and same goes for Voice of the Beehive – just a great pop band.

4/. The Flowers were the greatest ‘lost’ Scottish band -sister band to the Scars -all their work needs to compiled, remastered and reissued. The Heart Throbs were a wonderful band too, I wish Rose Carlotti would make music again.  The Go-Service – what a great band!  How did I completely miss out on them at the time?

5/. Sinead O’Connor‘s Mandinka from her first album is an immense song – must re-listen to the Lion & the Cobra

6/.  There is lots of great music hidden away on Brightons Vaultage compilation albums from ’78, 79 and 1980. There are seven songs culled from the three albums on the boxed set.

7/. Neneh Cherry should be an even bigger international star – even in Rip Rig and Panic her talent and enthusiasm shone out.

8/. Rhoda with the Specials,  The Boiler is still a remarkable and disturbing song, which you never hear on the radio.

9/.  Bananarama’s debut single Aie A Mwana was originally a Swahili song about miscarriage.

10/. The Fabulous Dirt Sisters were a group of women musicians who formed whilst at the Greenham Common Peace Camp.

Lucy O’Briens sleeve notes make the case for womens music being a powerful force in the ten years covered, which is was… but the most successful acts who became mainstream: the Pretenders, Bananarama, Tracey Thorn, were not the most innovative, radical and exciting. The real legacy is still pretty much underground, despite the Kill Rock Stars/Riot Grrrl years when vital, raging females took on the world with the same energy and fearlessness as the Slits and X-Ray Spex.

This is an interesting and worthwhile archive collection -but a mixed bag of the extra-ordinary, inspirational and influential but side-by-side with the careerist and the mediocre with just the gender of the front-person in common.

It was, I think, compiled by a man, (and reviewed by one!) which may have been the problem.

I have been hyper critical of this release, but it’s just my personal opinion, after 50 years of listening to music by men and women but always believing ‘the Future Is Female’… there are some great rare and obscure artists on here, some priceless songs… the collection is well worth the price of admission…it’s just not perfect, but what is?