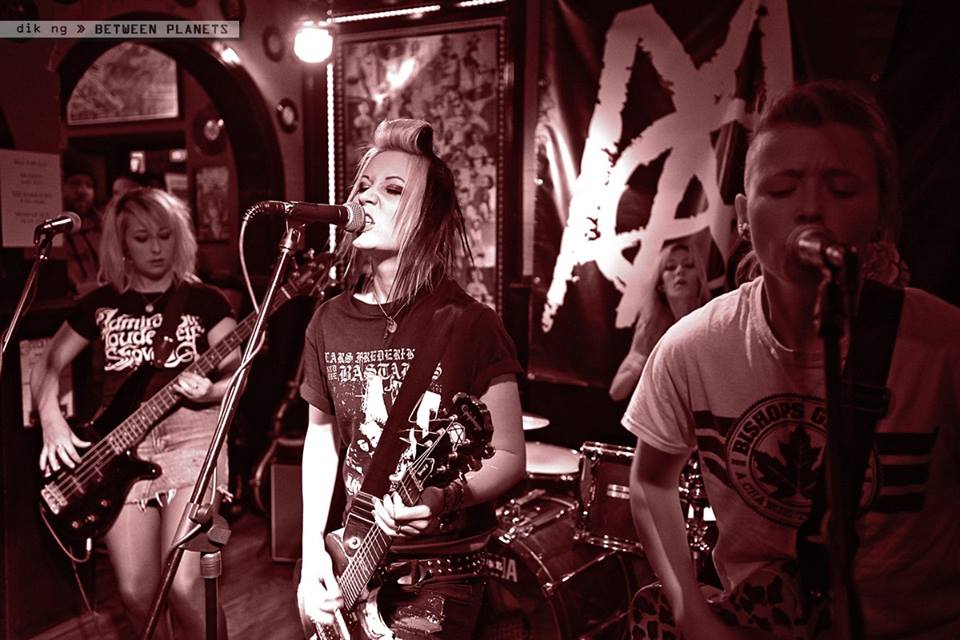 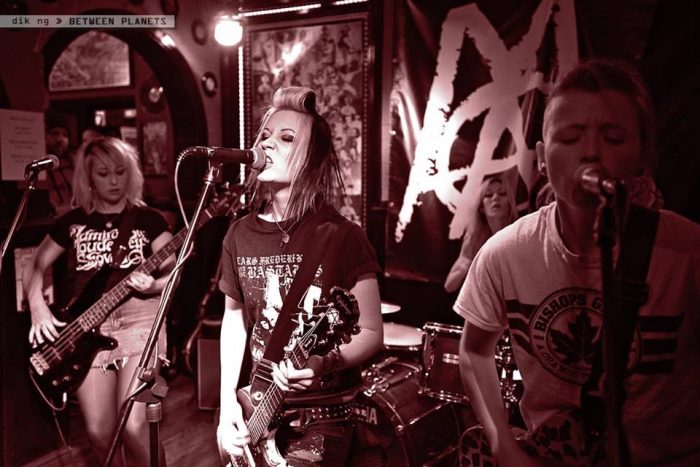 Four sisters who just happen to be the most unpretentious, heads-down rock’n’roll band in the UK.

I fully intended trying to grab a quick interview with Maid of Ace to talk about Feminism in Rock, everyday sexism, issues that women in music face. I wanted to know where they stand. I wanted to give them a voice in the various gender-politico debates of the day…. but the queue for selfies with the band was too long.  Watching them being photographed side by side. I noticed and articulately pointed out to them that, despite their differing hair and make-up,  they all have exactly the same (shaped) nose.

“Well, Duuh!” was the reply and a load of face pulling and nose-pushing and gurning.  “We ARE all sisters”.

Doesn’t that result in loads of on-the-road arguing and bitchiness I asked. How can four sisters get-on so well?

“Cos we’re A BAND!!!  We do bitch and stuff over petty things, but the band comes first”

Maid of Ace are as down to earth and unpretentious a band as I have ever met.  They have a natural in-built gang mentality and are fun-seekers who work hard at making dynamic rock’n’roll and can’t be arsed with any Rawk Biz fakery.

They are a band first, female second, but neither vociferously feminist or pro-actively using ‘tits’n’ass’ to sell their music (Hello Sex Pissed Dolls!).  I really wanted to meet their parents because they are probably my age and I wanted to see if they were old-punks or former-bikers, or a bit of both.

In a You-Tube interview an under-researched fool asked them where they met… “In our dad’s ball-bag!” came the reply.  I love Maid of Ace. They are just a proper, take-the-piss-first, think-about-it later band who rock like bastards.

The second they take the stage they rock, in perfect sync. They are, like the Ramones, intuitively tight. And like Motorhead, born to rock and rasp. “They sound like L7 ” said someone seeing them for the first time. I was gonna point out that they need not sound like another all-girl band just because they’re all-girls, but I wanted to get back to the dancefloor.  Maid of Ace were better than the 1978 Motorhead a year ago and are approaching Ace of Spades type supremacy. There is a bit of Brody Dalle about singer Ali’s voice but Maid of Ace have the kick-ass fun and fierceness of bands like Lunachicks rather than Dalles careerism.

M-O-A’s set just sped by with most of the Made In England tracklist getting an airing as well as selected oldies like the much-shouted-for Dickhead! The surprise ( to me at least) encore was a superb re-working of Fuzzbox’s Rules and Regulation which was an absolute stormer and the cherry on the cake of a thoroughly enjoyable set.

This was another great night at Talking Heads -although the usual problem of being a school-night meant it wasn’t as full as it could’ve been (Southampton still deserves its Sofa City nickname sadly). Also despite a few younger people in the crowd and a higher proportion of females there was little by the way of dancefloor mayhem.

The supports were (a much improved since last-time I saw them ) Brash Bullets -complete with inflatable crocodiles and sounding like an early Alternative TV.   Portsmouth’s thinking mans hardcore vets Watch You Drown opened the night with their rhythm-driven, taut and wiry sound incorporating new and old material. An encore of 12XU being a choice bit of indulgence in nostalgia and virtual signalling.

It was Ali and Anna and Abby and Amy’s night though and they were Fuckin’ Ace.   If Carlsberg made kick-ass, no-nonsense all-female rock bands, they’d model them on the Maids.