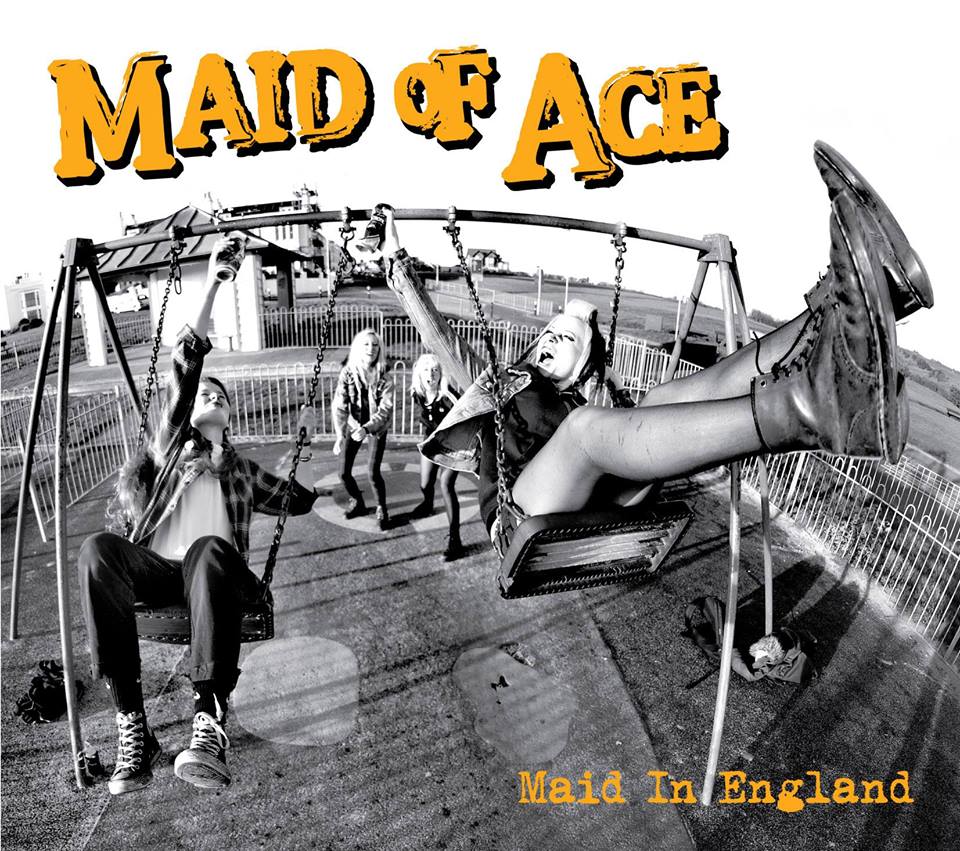 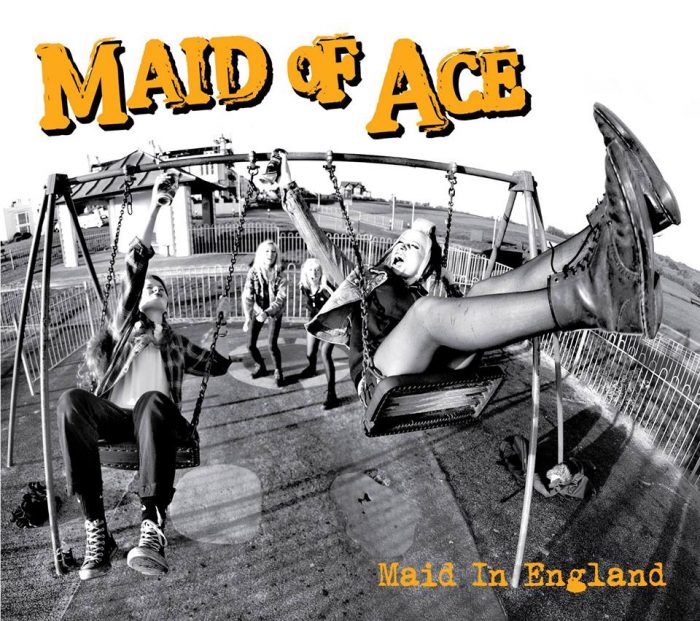 Maid of Ace: Maid In England   (Maid of Ace Records)

All-girl all-sister band from Hastings. New Breed Punk Rock’n’Roll.  Ged Babey thinks they are ace…. For fans of the Distillers, the Runaways and Hole

I blame the parents.

If you have four girls why would you name them Alison Cara, Anna Coral, Abby Charlotte, and Amy Catherine ? Well because if your surname was Elliott, you’d have, initially: Four ACE’s. A good hand and a great band.

The Ramones, as we know, were not brothers, and there are a few bands with sisters in, but I can’t think of any others who have FOUR sisters in,  Apart from the Shaggs…

The best thing about Maid of Ace, apart from their biker-rock’n’roll punk-tunes, is the fact they don’t sell themselves as a tits’n’ass chick band or a preachy feminista-sista act. They just get on with it. They play hard and fast and loud and dirty. They have a blood-ties gang mentality and their mission is to have fun. The photo on the album cover captures their essence, as do their promotional videos. Maid of Ace’s brand of rebellion is about living now, getting pissed, having a laugh and kicking ass, rockin’ out … on a budget and in-spite of the bad-times, grey-skies, hell-in-a-handcart end-of-days we’re living through.  That said, it’s not possible to be ‘a punk band’ and not have ‘something to say..’

‘Raise the Minimum Wage’ is one song which touches on the daily grind. A brilliant imitation of a robo-computer-voice saying ‘You-have Zero-pounds, zero-pence’ is blow-torched by Alisons throaty roar. Her voice shreds!

A song called ‘Fight’ is a manic manifesto of basic punk rock ideals “Fight for what you believe in…. Take Control …Follow your heart’n’feed your soul!”  It is the most-hardcore track on the album and reminds me of Conflict,  whereas the rest of the album is more streetpunk meets biker-rock.

‘Greed’ is an anti-capitalism rant you can have a good vent to when you sing-a-long. But targets poverty-porn to: “Somebody else’s tragedy is entertainment for  you and me. Ignore!”

The title track is more about feeling homesick when on tour rather than any kind of flag-waving nationalism. The Oi! Oi! Oi! chorus will go down well at Rebellion no doubt.

Maid of Ace don’t really do ‘love songs’. The relationship songs, shall we say are just as raging. The people in there sights are either ‘Boring’ or  a ‘Monster’.  Even a song called ‘For You’ seems to be more about the romance of getting fucked-up together.

Maid of Ace are one of a bunch of bands who have female members who play a heavy but melodic, grunge-influence kind of punk rock.  Brassick, Trioxin Cherry, Army of Skanks,  Hands Off Gretel … all of whom can out drink and out play or holler their male contemporaries.

This is MOA’s second album -the highlights from the first, Dickhead and Bone Deth have played-to-death videos on Youtube. They were great statements of intent and Maid In England is a solid follow up;  Hollywood Rain and Disaster of Noise show musical progression but with none of the rawness smoothed off.  Superficial similarities to the Distillers and the Runaways aside, they actually have the feel of a band whose influences probably cover everything from Oi!, Goth, Greebo, Punk, Anarcho, Thrash and Metal.

The production, limited by budget no doubt, is not as good as it could be. Where are the successors to Vic Maile and Martin Rushent when you need them? But as they say, Maid of Ace  defiantly are ‘faster than boys’  but not-at-all a ‘disaster of noise’ and beat the boys  at their own game in terms of kick-ass rock’n’roll with a lot of venom and a bit of social comment.

I would say that they were Lemmys bastard offspring but that would be casting aspersions on their mum and dad who have raised them well, a ready-made sisterhood of rockers who raise Hell!

Maid of Ace’s next gig is at Rebellion, Blackpool on Friday 5th Aug at 1.20 New Tower Street Arena Stage