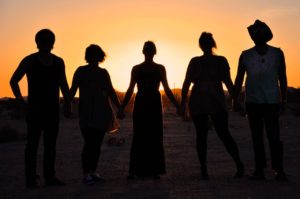 This sprawling, often epic sounding track starts off quite sedate. Almost like a Dixie Chicks track? Then the low, baritone voice of lead singer and song writer Tim Cohen kicks in and the full size and scope of the tune is in full swing.

The woozy guitars and impeccable harmonies transform and transport you to a majestic plain. In fact, once the swirling keyboards join the party, it really does become the aural equivalence of walking through somewhere in the dense deserts of America. It has the same effect as America’s classic track ‘Horse with no name’.

Billed as Psych Pop or Stoner rock, the sound of Magic Trick is hard to pin down by just this one song so a listen to their forthcoming long player ‘The Other Man’s Blues’ is a must. They are a band that has a big sound, not just instrumentally (the LP was a largely loose session/drop in and play affair with at least 7 or 8 members) but with the far reaching harmonies of Alicia Van Heuvel, Noelle Cahill and Anna Hillburg. They are the real crux of this track. And even though it does seem to lose its way towards the very end (too much looseness maybe?), it does have a gorgeous sound and the album deserves a listen.